It may be raining dragons and ogres outside, but it's raining glitter in my heart. Light delicate beauteous teeny tiny sparkles of shimmering light. Out of the corner of my eye I can see the woodland creatures have come out to play. A squirrel high fives a chipmunk and in response my melodious giggles carry on the breeze. Hark, is that a rainbow I see? No, it's FIVE HUNDRED rainbows I see! Crimson and tangerine hump each other in the sky while a lemony yellow rubs it's skins against a kelly green giving birth to an onslaught of blues and violets. Colors, colors, everywhere colors! Wearing nothing but a smile and a feather boa, I roll around in the blanket of glitter I've prepared for this very moment. It took months of haggling on the phone with party planners, thousands and thousands of dollars in rental trucks, and an exchange of sexual favors with random moving men that I'm much too ladylike to talk about, but I did it. I finally did it! My backyard is a shimmering sea of sparkles and I'm diving in. I've waited the entire summer for this moment and now it's time to celebrate. You're all invited. Leave your cats at the door and fill your jugs with gin from any one of my bathtubs scattered around the house. The juniper berries were quite plump this year. Jordan has left the building and I'm throwing a party. Let's recap, shall we?

By a vote of 1 million to zero (the other 999,999 votes belong to me), Jordan you are evicted from the Big Brother House. *fanfare, parades, marching bands* Now, do us all a favor, and never ever return to television at any point in my lifetime. And while you're at it, kindly convince your fake boyfriend to do the same. I still think you owe CBS $500,000, but I'm willing to let that slide if you promise me that I'll never have to listen that voice of yours again. That alone is worth half a million dollars.... "Wull, umm uhh it's so fusstrating. Jayeff!" Oh shut up. 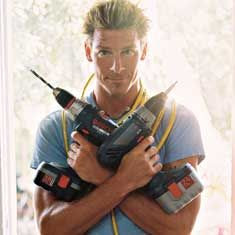 All season long I've only wanted one thing: Jeff and Jordan out of the game. People have asked me who I'm rooting for and my answer has always been, "Not Jordan." I guess I'd like Porsche to win. I don't know. *shrugs shoulders* Rachel is vile and the thought of her getting rewarded for anything makes me ill and Adam... Well, I think we can all agree that the only thing Adam deserves is a one way ticket to the inside of an active volcano. The season as a whole has been a joke and I think it'll continue to be a joke if things stay the way they are. It's been 13 seasons of the same old same old. The game needs a gigantic revamping. We all know the ins and outs. We all know what to expect. Casting is paramount, but so is ingenuity. Big Brother is stuck in a rut and I think the only thing that can save it is a complete makeover. Get Ty Pennington on the horn and let's tear this shit down and rebuild. Enough with the complacency already. Update, upgrade, 2.0, what have you. 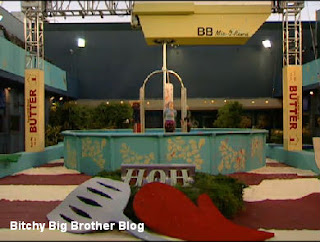 Alright, so this brings us to Part 1 of the final HOH competition. We left off with our final three spinning on a giant mixer in a vat of what looks like movie theatre popcorn butter and getting sprayed in the face like a Japanese bukaki film. It took a few minutes for the feeds to kick on and when they did I got something I didn't expect. I got sick! Head swimming, eyes rolling, insides burbling sick. Never in my life have I experienced motion sickness, but last night was brutal. It was near impossible to watch the spinning (my god, the spinning!), but I did manage to catch some photos of the torture. 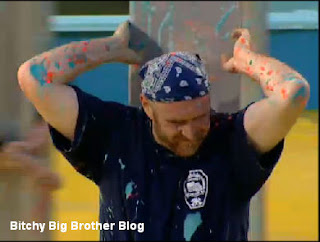 Adam struggled from the start because the idiot placed his hands over his head rather than behind his back. He's also made of bacon and nicotine so I don't think anyone realistically expected him to win. He fidgeted and grimaced the entire time while the girls stood stoic with their eyes closed. After about 20 or so minutes, the lump finally fell just as we all expected him to. 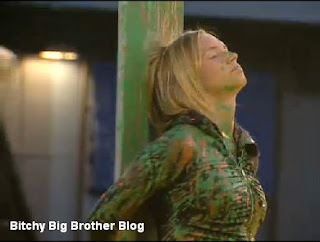 Now we're down to Porsche and Rachel. Holding on didn't seem to be a problem for either of the girls and for the next 20 minutes they stood with nary a flinch. All of a sudden, Porsche started to twitch. I don't think it was her arms. I think it was the spinning, the godforesaken spinning... round and round, over and over, never ever stopping. *pukes into a cup* Out of nowhere Porsche says, "I have to get down." Wha... wha... what?!? Look, I realize you're probably sick as a dog and the anxiety is doing all sorts of crazy things to your brain, but you hold on, bitch! Hold on and puke on yourself if you have to. This is do or die! 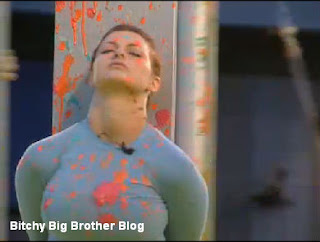 My words fall on deaf ears as Porsche just - ploop - plops into the butter. That's it. That's all she wrote. Rachel has won part 1.

After everyone showers and gets their equilibrium back, there's a lot of reminiscing about past competitions and who won what. The second Adam leaves the room, Rachel turns to Porsche and tells her she needs to win part 2. Rachel is concerned that if Adam wins parts 2 & 3, he'll evict her from her game. I hate to say it, but I think that might be ok. In a Porsche/Adam final 2, Porsche has to win, right? Those chuckleheads in the Jury House couldn't possibly vote for Adam to win, could they? I could see Jeff & Jordan voting for Adam (because they're idiots and have no respect for the game), but would anyone else vote for him?

Rachel is convinced that in a Rachel/Adam final 2, Adam would win. I'm not so sure I agree with her. I think no matter who Rachel is up against in the final 2, she will win Big Brother 13. It won't be by a landslide, but she'll win. Porsche's best shot to win is for Adam to win parts 2 & 3 and take her to the final 2. Maybe I'm putting too much faith in the Jury, but I'd like to think that they would recognize how useless Adam has been all summer long. Then again, Porsche completely sucks when put on the spot in a question scenario. I can almost see her talking her way right out of votes in the question portion. Christ, who the hell knows? It makes my blood boil to think of a vet winning and, at the same time, I'm scared shitless Adam will pull a miracle out of his ass.

Looking back on this season, I think we can blame where we are now all on Kalia. Had Kalia not completely fucked up her first HOH, Brendon may not have come back, Rachel might have gone home sooner, and Daniele might still be in the game. Personally, I'm glad Kalia went out before the final three. That HOH that evicted Lawon was probably the biggest travesty of the summer. There were plenty of other mistakes along the way... most of which can be attributed to Adam's flipping. How the house let him get away with it for so long completely floors me. They let their personal bullshit get in the way of the game and a dud of a player snuck through to the end. What's even more stunning is that this dud actually thinks he's a solid contender. Adam thinks he can use the fact that he won some comps in the end to convince the Jury to vote for him to win. According to Adam, if he wins parts 2 & 3, he's got this thing locked up.

So, what do you guys think? Who do you want to win BB13? Do you think Rachel will win if she makes it to the final 2? Who do you think would actually vote for Adam? Can Porsche beat Adam in a final 2?

If you've enjoyed what I've done here this season, I ask that you please click on my PayPal button in the right hand column and show a girl some love. I know it hasn't been the best of seasons, but hopefully I've managed to entertain you and make you laugh just a wee bit. For the next 13 weeks or so, you can find me over at the Bitchy Survivor Blog. And, don't forget, the BB13 fun isn't over just yet... we still have Vegas. Sweet, sweet Vegas. I've got more insiders than ever lined up and ready to dish all the dirt. Some of the gossip may end up here and some may end up over on the Bitchy Network. Any fights, sex romps, scandals, or bitchassness that goes down in Vegas will end up in my little hands and wrapped up in a pretty pink bow for all of you to enjoy. Get ready.