The Monster Is Unleashed 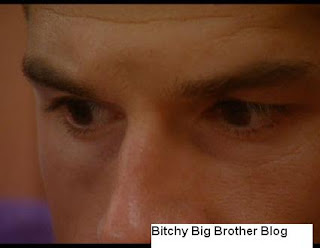 I awoke this morning to find my panties in one corner of the room and a dead Goat Man in the other. All I can remember is the gin bong train that seemed to never end, Mr. O'Shaugnessy bursting through the door wearing one of those triangle shaped Asian hats, and then someone shoving an overflowing opium pipe in my mouth. Did I bury myself up to my waist face first into a vat of glitter with no pants on? I'll personally brutalize anyone who posts those photos online. Ugh... my head is swimming and I'm nauseous. I just need to lay back for a moment. Oh for crying out loud, why the hell are my vajazzle rhinestones on the ceiling?!? Deion! Are you responsible for this?! *sigh* And can someone please tell me why my dog is all of a sudden hairless? I only just got her yesterday (true story) and now she looks like fucking Grandma Wrinkles. And, for some reason, my sense of smell has vanished. I'm gonna look at that as a blessing in disguise. Looking around this room I can see the floor is sticky and there may or may not be a separated Siamese twin hanging from my chandelier. Let's recap, shall we?
The red headed harlot is gone and all that remains of her are the dyed coarse red hairs stuck in the Big Brother shower drain. It's a metaphor really. Rachel and her hairs stop fun, happiness, joy, goodness, precious furry animals, and clean filtered water from flowing into the ether. Time, like the water in that shower stall, stops and all your left with an unsanitary problem screaming for a plunger. Gross. But, I'm jumping ahead. First things first, the big HOH comp. 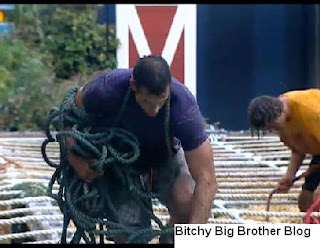 The houseguests have to unravel themselves from a tangled rope and get to the end first - a Survivor challenge by the way (Survivor cast first impressions coming soon at the Bitchy Survivor Blog!). Like a bat out of hell or a cro-magnan man chasing a wooly mammoth, Brendon hurls his oafish body and giant forehead through tangle after tangle of rope. Enzo begins to chat like he's having a cup of cawfee, Kathy curls up for a nap, and Britney can barely lift the rope over her head. The challenge was designed for large strong men so it's no surprise that Brendon, Lane, and Hayden were the head of the pack the entire time. Now, I don't know if Lane and Hayden genuinely threw the competition, but Brendon really was the only one out there with any fire in his gut. This complacency amongst the Brigade is nauseating. They control the house, they have a majority, it's ok for one of them to win now. People on Twitter seem to think they collectively threw the competition in order to not get blood on their hands. I'm gonna say that this is probably partly true. I'll bet they started with good intentions, but after seeing that actual physical labor and intensity were required, they weighed the "what's the worst that can happen" scenarios in their head and then threw in the towel. It is with extreme regret and disgust that I announce that Brendon, Bitch Boy extraordinaire, is our new HOH. *runs to bathroom to puke* Dammit, if I'm pregnant I'm gonna pissed. Never mind the fact that I have no idea who the father could be. I'll either give birth to a little person (Mr. O'Shaugnessy), a caramel baby (Deion), or an infant with hooves and horns (Goat Man). If I slept with anyone else I don't know about, let me know in the comments so I can kick your ass. 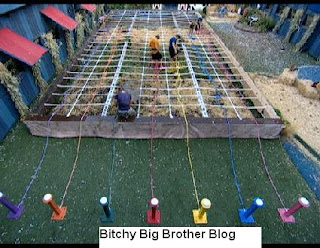 So, Bitch Boy wins and just as he smacks the buzzer or whatever he launches into a douchetastic speech about people coming after him. Thankfully, the Feeds went down and we were spared his ranting gibberish. It must have been during that speech that he named Britney, Ragan, and Matt as this week's Have-Not's. Since Bitch Boy stands for everything unholy that I hate, let's do the Have-Not's a solid this week, shall we? Why don't we all vote for them to get Bologna and Bran Muffins? No need to punish some of the only people willing to stand up to Brenchel. That sort of behavior should be rewarded not penalized. You can vote HERE. 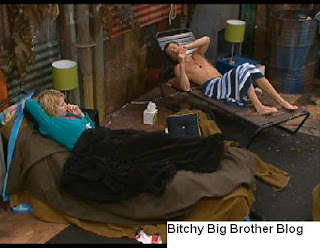 When the Feeds return we find Britney and Ragan in the Have-Not room crying and feeling sorry for themselves. Hell, I'd cry too if I knew Encino Man was in charge of the house. I'd also probably drink Windex and gouge my eyes out with a rusty spoon, but that's just me. Ragan begins to regret calling Rachel a witch on live television and that pissed me off a little bit. He thinks it's karma that's out to get him out. Britney disagrees saying that if karma had anything to do with anything, there's no way in hell Brendon would have won HOH this week. Meanwhile Enzo is in the other room wondering why everyone is so mopey and sad. He's as happy as can be with how things turned out. He's also a fucking idiot. I'm sorry, he's likable and all that, but I'm very "What have you done for me lately?" when it comes to Enzo. He never orchestrates strategy, he's always shocked when people evaluate game play for him, he never wins anything, and he eats like a pig. I truly think that at this point Enzo might even be more useless than Kathy. At least Kathy stands up for herself and tries. Yes, she's weak and all that, but she tries. I have yet to see Enzo try anything.

So, Brendon is HOH and he's picked up a new habit. He saunters now. He also curses like a retarded sailor, but this sauntering thing is really what's gonna bug me. How do I describe it? It's like P. Diddy walking with an ankle injury meets a constipated Cro-Magnon man. It's scary and if I saw it in shadow form on a wall, I'd hide under my blanket and call the police. He's the HBIC and with that comes a confidence that manifests itself in his walk. Mr. O has been practicing the walk all morning. It's cute when a naked bearded man with a new asian character tattoo on his ass imitates a caveman with his tiny bow-legged legs. He won't tell me what the tattoo stands for though. Everytime I ask him he blushes and giggles so I kicked him in the nads and sent him to his corner. Ahhhh, it's nice to have things finally back to normal around here.

Off in another room of the house, Enzo and Hayden are talking about who they'd vote out if Britney and Ragan were on the block. They both decide that Britney would be the better choice because, as Enzo puts it, "She knows stuff". Personally, I'd prefer Britney stay. A house of penis isn't really what I want to watch for the next 18 weeks (yes, it feels like 18 weeks) and Britney makes me laugh. I can honestly say that at this point in time, I would have no problem whatsoever with Britney winning the whole kit and caboodle and becoming our new BB12 champion. She's entertaining, she's winning stuff, and she's not afraid of the penis people. I dig that.
A little later on Enzo is shooting the shit with Brendon. Brendon tells him that they should have never kept him in the game because, by doing so, they've unleashed a monster. What kind of monster are you Bitch Boy? A whiny crying salivating (his saliva is really gross and audible) embarrassment to his family monster? Ooohhh so scary! Enzo ignores whatever Brendon is spewing and goes on to say how he really wants to get a photo of his wife and daughter at some point. Bitch Boy says he's not close to his family and that he'd be absolutely fine not hearing or seeing them. Hmmm, I wonder what's going on there. Could Brendon's suspension from the California School Board for inappropriate conduct have something to do with it? There's a story there... definitely. Count on it. Brendon even has the nerve to say that he'd much rather get a letter from Rachel than his family. Are you shitting me?! She just left the goddamn house! What's she gonna say to you Brendon? Hey HEY Heeeeyyyy, what's up in the hizzy y'all? Brendooooonnnn you better buy me an $80 bottle of wine when you get out. Love ya beyotch! I AM Vegas!! LULZ Is that the type of inspiration you're looking for Bitch Boy? You disgust me. Don't you have any friends or anything? Actually, what the hell am I saying? Of course he doesn't have any friends. Would any of you good people be friends with him? Hell to the no! 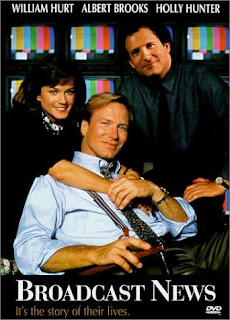 Back in the bathroom, Ragan is now crying to Hayden. He's aware of how ridiculous he looks and he actually used to laugh at people who cried on reality shows. It's just that Ragan, like Holly Hunter in Broadcast News, likes to have a good cry now and then to purge himself of all the bad thoughts. Holly did it daily, but Ragan likes to do it once a week. He also prefers doing it without a house full of cameras watching him and analyzing his every move. Hayden understands and says that he, too, has sometimes felt like crying. It's all very bromantic and boring. You see, everyone is basically forcing themselves to stay awake for the big HOH reveal. For some reason, it's taking a REALLY long time for Brendon to get his room. I wonder if the reason is that no one in Brendon's family wanted to write him a damn letter. Clearly, BB was unprepared for his victory (although I don't know why - wins like his are a dime a dozen in the BB house) and the rest of the house was forced to suffer because of it.
I woke up at 4 in the morning and checked my Twitter to see if anything of note had happened. It was about that time that Brendon had finally gotten his room. The letter was from Lupe, his sister, and I think it said a bunch of stuff about them not being close at all. Nice Lupe! Better yet, Bitch Boy got a photo of Rachel. I wonder if that was what took so long. CBS couldn't find one without her vagina hanging out so they spent half the night photoshopping in one that would be acceptable. He got a Weezer CD and seriously, who the hell cares? This week is gonna suck I think. The fact that Brendon even won at all was a big wake up call to Ragan and Britney and now I'm thinking they'll be holding their tongues and lightening up on the trash talk. Sucks.
So, who shaved my dog? How did Goat Man die? At this point, who do you want to win BB12? Do you foresee any fights whatsoever happening this week? Comment it out bitches and have a great day!
Posted by Colette Lala at 9:05 AM