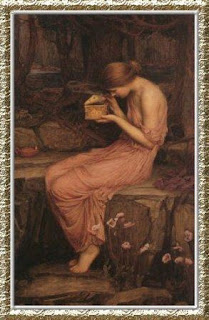 Created as a punishment, created out of clay, Pandora was molded by the hands of gods. Prometheus, a dandy trickster of sorts, stole the secret of fire for humankind and needed to be punished. His punishment? A beautiful evil named Pandora sent to walk amongst men and seize their every waking thought. Spinning on a potters wheel, Pandora rose up and began to take shape. Her limbs perfect, her skin flawless. But the gods didn't stop there. They gave her gifts - gifts of seduction, gifts of deceit. Fully formed and complete, Pandora beguiled those around her with her silky robes and her garland dripping hair. And all the while she lugged around a jar. An ornate jar with a cork stuck in its top. The jar, much like herself, tempted and teased, taunted and tantalized. What was inside, she wondered day in and day out. Was it wine? Was it an elixir? Was it a way to keep Dan Gheesling from going home? The only way to answer these questions was for Pandora to pop the cork. And pop it she did. Let's recap, shall we?

So, the hairy knuckled finger of Allison Grodner is at it again. Shunning all that is organic (game play, strategy, food), Grodner and her flunkies favor the processed cheese coated manufactured crap we get year in and year out. It's Pandora's Box time, bitches! The feeds were down for a good portion of the day and since I like the nightlife and like to boogie, I saw very little yesterday but will try my best to summarize what we know so far. 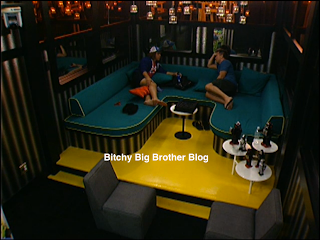 The morning begins with Frank and Joe in the Arcade Room. Joe wants to know from Frank exactly what it is that bugs him so much about Dan. Oh, let me answer this Joe! Pick me, pick me! Joe ignores my cries while Frank tells him that it is pretty much everything since day one with Dan. He made promises he didn't intend on keeping, he won't answer any questions, and the scum bagging... my god, the scum bagging! I still have no idea what that is by the way. Is it like tea bagging?

Anyhow, Frank goes on to tell Joe that the live studio audience cheered for him during that POV because they all know who shady Dan is. Call me crazy, but I think the crowd groaned when Frank won. Weren't they cheering for Shane? Joe nods and replies, "You got a lotta support out there man." Joe then tells Frank that the reason he couldn't vote for Boogie on Thursday night was because he had a debt to pay to Shane for saving him. Today that debt is all paid up and Joe is a free agent again. 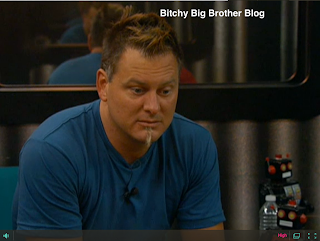 Naturally, Joe runs straight to Britney and tattles everything that Frank told him. Britney stares into her giant mug of French Vanilla Creamer and tells Joe that there is nothing they can do to save Dan. Joe agrees and tells her that Frank also thinks he has Ian's vote. He makes it very clear to Britney that Frank never wavered once from wanting to get Dan out. Frank wants him out this week come hell or high water. He's not even considering another name. Joe also tells Britney that Frank isn't going to put him up on the block this week. All he wants from Joe is Joe's vote. Joe says the only chance they have to save Dan is to win POV. 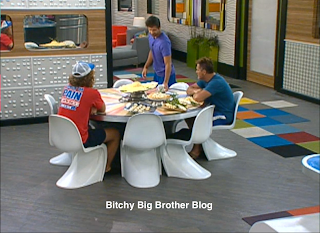 The feeds go down for a while and there is lot of speculation as to whether or not it is Pandora's Box. Apparently, Frank has been locked out of his room for a while. It is a false alarm though and when the feeds return the HG's find a new smaller table. Joe declares, "Meals are gonna be tight!" Yes, tight and full of typhoid thanks to your pee fingers. Plus, we find out that the Have-Not's (Dan) got mozzarella and matzo.

The feeds go down again and this time it is the real deal. Pandora's Box.

When the feeds return, we find Ian pacing again frantically hither and thither. He's mumbling to himself, "Every man for himself, right?" Britney and Frank try to console him and it is here that we discover how Ian actually won something called the Golden Ball Of Veto. The Golden Ball Of Veto is literally a gold ball that lets Ian take one person off the block. The only drawback is that he can't play in the POV tomorrow. 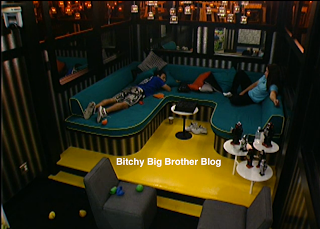 So while Ian is pacing and calling himself a "scumbag" (Oh shut up.) over the fact that he actually won something, Dan lolls about in another room smiling to himself. Boy, is he happy he never ratted out Ian! He was going to tell Frank everything that little pipsqueak was up to but never got around to it. And now, here we are, with Ian holding the power to save Dan. Isn't that funny how that happens? Dan's only worry is if Frank nominates Ian because then Ian will surely use the power to save himself. 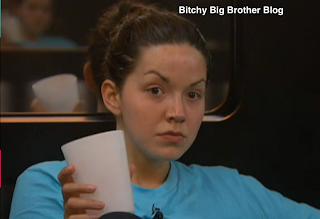 All of this makes Dothraki Danielle very angry. Very very angry. Just look at that face. Look at those eyebrows slicing the sky. They're like little hairy machetes of malice. Our kind-hearted Florence Nightingale wants to turn Ian into a football and punt him across the yard. *beams* We are so on the same wavelength Danielle. My eyebrows don't have that same razor's edge that yours do, but Ian unnerves me to the core.

Frank joins Dan & Danielle and here is where we learn that Frank was actually locked up in the HOH throughout Pandora's Box. He had envelopes with different dollar amounts on them and he took the one worth $3000. Out in the backyard, there was something with balls and quarters. I think quarters were hurled at the HG's (Danielle keeps saying how much they hurt) and then they were used to play that grabby arcade game thing. From the sound of it, Dan got very ugly during the game and is embarrassed by how he acted.

I'll be honest, I kind of checked out for the rest of the day, but here is what we know: Frank wants Dan out of the game. Ian has a Golden Ball Of Veto. Frank now needs to make his nominations. One would think Frank would nominate Ian in order to get Ian to remove himself and make his GBOV null and void. I mean, right? RIGHT?! He should nominate Ian and someone else like Shane. Then, when Ian pulls himself off, he puts up Dan. Plus, with that other POV hanging out there in the wind, Shane would surely kill to get it if he was on the block (which would be a good thing because the last thing Frank wants is Dan winning POV). But noooooo. No. You want to know who Frank nominates? Frank nominates Dan and Danielle. FRANK NOMINATES DAN AND DANIELLE!

Help me out here because I'm struggling to comprehend all of this. Ian says he won't use his GBOV because he feels bad going against Frank again because of what he did to him and Boogie last week, but still. Still! There are no guarantees in this life and I can't believe Frank would be so careless. His intuitions haven't been half bad thus far in the game so maybe he knows something I don't. *shrugs shoulders* I have no idea.

Alright, I've got to end this here today. Sorry this was so short, but you can hear me tonight on another episode of the Big Brother Gossip Show where I'm sure we'll flesh this all out a little more. So, what do you guys think? Did Frank make a mistake with his nominations? Will Ian stick to his word? If I tape razor blades to my eyebrows, will I look like Danielle? Comment it out bitches and have a great day!