Lords Of The Dance 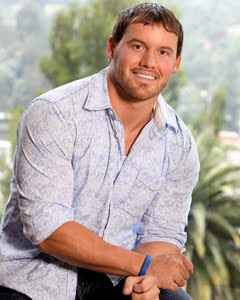 Like Sarah Jessica Parker in Girls Just Want to Have Fun... I love to dance. My one guilty pleasure in life (other than opium, gin, glitter, little people, and gratuitous violence) is dance movies. As a matter of fact, when I'm rich and famous from my bestselling novel Eat, Bitch, Fuck, I'm gonna start a basic cable station that plays nothing but dance movies on a constant loop... Center Stage, Coyote Ugly, Fame (the original), Save The Last Dance, Footloose, Flashdance, Staying Alive (the best movie ever made I'll have you know), etc. You know that feeling you get when you're at the theater and the curtain lifts and the music swells? Your heart begins to flutter, a rush of emotion takes over your body, and you wait with bated breath to be delighted. That's how I feel when there's a dance sequence in a movie. So imagine my glee when Big Brother announced that the newest and last "punishment" from Lane's Pandora's Box is that the HG's must dance for one minute every hour. I envisioned buff bodies in leotards leaping and pirouetting across the backyard while Britney floated in the air on Lane's shoulders kicking her legs this way and that. I thought at the very least I'd get headbands, legwarmers, and pointe shoes. My jete pas de bourree jazz hands dream was not to be. Instead I got a lot of marching in place, raising the roof, and clenched fists. Let's recap, shall we?

OK so let's begin by talking about last night's Big Brother show... which I watched after the Emmys and fell asleep half way through. Lane won HOH and everyone in the house and on Twitter are now all ticked off that Lane comes from money. Former HG's were commenting about Lane's finances and the same hypocrites who hated Ragan's "most deserving" speeches began mouthing off on how Lane now doesn't "deserve" to win because he already has money. Did Big Brother become a charity program that I'm not aware of? I didn't realize that Big Brother is now some kind of scholarship or welfare institution. I don't give a shit if a player is a multi billionaire and lives on a private island in the Bahamas. If the player is the best at competitions and strategy, then that player deserves to win the game. To say Lane shouldn't win just because he already owns a house and his dad has airplanes is moronic. Lane shouldn't win because he's a crap player who bores me to tears. That's why he shouldn't get the money not because he has a mortgage to pay. 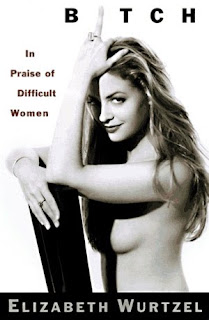 Watching Annie, of all people, sit in judgment and analyze game play out of bitterness is most disappointing. I was on her side. I was ready to defend her. She only lasted a week, but I would have given her publicity and helped her out with whatever future endeavor she had. I hate it when I like someone and then they do something stupid to make me scratch my head and go, "Really? You just said that?". I get that way sometimes over Elizabeth Wurtzel. I'll get all excited to read a new article she's published only to discover it's a thousand word elitist rant written out of jealousy. I'll push it to the back of my head, chalk it up to a lapse in judgment, and try to forget I ever read it. It's when it happens over and over and over again that you're forced to say to yourself, "Maybe she's not that inspirational after all..." I imagine Ass Licker fans must experience that disappointing feeling everyday of their lives. It's kind of impossible to defend her anymore now that she's doing porn. I hate to say it (no I don't), but I told you so.

OK so back in the house Lane is having trouble trying to figure out who to put up in Enzo's place. If he puts up Britney, she's gonna get pissed off and Enzo could actually vote her out. If he puts up Hayden, he risks hurting his hairy friend's feelings. Britney gets word that she might go on the block and she's very quick to tell Lane that there's no way he can win against Hayden in the Final 2. She tells Lane that Hayden needs the money and that his family may have financial difficulties while Lane has a new house, a cushy job, and no monetary woes at all. I'll say what I said before, this stuff shouldn't matter, but to these chuckle heads it does. Britney has a point though when she says Lane could never beat Hayden in the end. Hearing this annoys Lane and the expression on his face the rest of the night is proof positive he is not a happy camper. He spent hours sitting in quiet contemplation looking stressed out and confused. If he wants to make a big move, he should just get rid of Hayden now and go ahead and make a Final 2 deal with Britney. He should stack that jury house with as many Bra-gade members as possible and skate his way to victory. The problem, of course, is that he's a total pussy. For someone so large who has no problem beating the shit out of people (uh yeah, I read that article too) he's unusually cowardly and cautious. The only way I can see Lane winning this game is if he gets rid of Enzo and Hayden and takes Ragan or Britney with him to the final. I'm pretty sure this little nugget has dawned on Lane as well because watching him sit with a pained look on his mug you just know he's wrestling with a difficult decision. 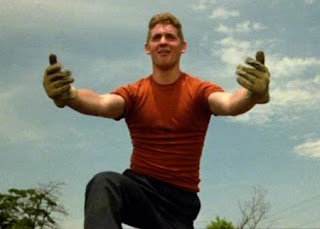 In the middle of all this tough game playing, Big Brother tells the HG's to dance whenever they hear the music. In the first paragraph I said I expected an exquisitely choreographed celebratory number that expressed the human struggle within. I wanted Michael Douglas sitting in the dark smoking a cigarette telling everyone they sucked. I wanted Bob Mackie costumes, wanton popping of Dexedrine pills, and clever overly sexual grinding and writhing ... or something like that. Here's what I got instead: five buffoons jauntily walking with nary a spirit finger in sight. Ragan and Britney actually gave it a good effort. Ragan would hump the kitchen counter while Britney strutted shaking her money maker in her Ugg boots. Enzo, on the other hand, morphed into a West Coast rapper pursing his lips and raising the roof. Lane did some sort of awkward skipping thing and you just knew that he was totally the Chris Penn character in Footloose who refused to dance at school functions. This leaves Hayden... strange and awkward Hayden. For some reason, the infectious beats turned Hayden into a majorette of sorts. He clenched his fists, stood up tall, and marched his way across the backyard. I don't know if he thought he was in a parade or what, but it was disturbing and made me concerned for his lovemaking skills.

Not much else happened and that's all I got for now. I'm not sure if I'll be able to post tomorrow. It all depends on whether or not my vajazzle appointment comes through. Until I return, I leave you with the best opening to any movie ever in the history of filmmaking. Please to enjoy:

So, who do you think will go up as the replacement nomination? Is there a chance Hayden goes home this week? Will Hayden ever be recruited by the American Ballet Theatre? Comment it out bitches and have a great day!
Posted by Colette Lala at 10:26 AM