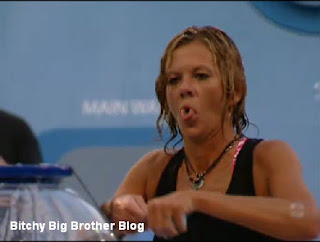 The big ole rusty pendulum of life has swung back in the other direction and now a bunch of insufferable maggots are in power again. Three weeks of promise are gone and all we have to show for it is one lurching penis skyper nestled cozily in a mansion somewhere. So many mistakes have been made. So many opportunities passed by. *sigh* Now I have no choice but to spend the rest of the week referring to myself in the third person. Big Colette is angry about how things went last night. Big Colette shakes her head with disdain while polishing her rifle. Big Colette can't remember where she put her bullets, but, once she finds them, Big Colette plans on shooting her face off. Let's recap, shall we? 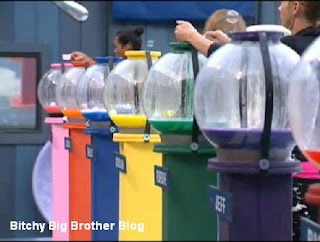 The HOH gets off to a decent start with everyone keeping pace and shuffling their little hearts out. Straight away we knew the pretzels, hot dogs, pound cake, fish sticks, pork tendorloin, and sides of beef couldn't have been doing Kalia any favors jostling around in her stomach like that so it was pretty safe for Big Colette to assume that Kalia wouldn't even come close to winning. Besides Big Jeff, Porsche was the break out star with Jordan right behind her, but could they keep up? Only time would tell. 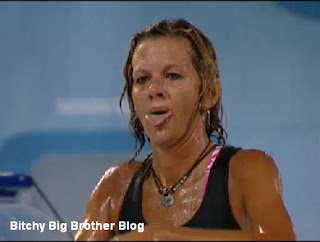 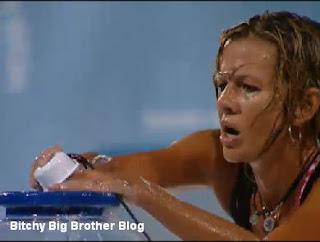 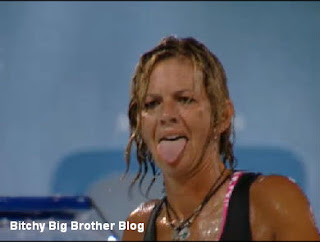 Shelly, the wonderful wizard of leather, was a speed demon. With her Meg Ryan hair matted to her face she raced back and forth, back and forth, on her bony legs keeping a decent pace for a smoke-filled ole broad. The only problem was she kept spilling half her bounty before making it to her giant gumball tank. It was an error she had no idea she was making and one that she'd never recover from. Thankfully, her animated fish faces kept Big Colette giggling and clapping with delight. It was somewhat comforting to know that when Shelly concentrates her tongue takes on a life of it's own and peforms a little dance for passersby. I can just imagine Shelly on a fly fishing adventure in Montana with one of her big money clients. The fish would leap out and latch onto her tongue instead of the bait. Everyone would guffaw and laugh while Shelly, cheerfully posing with both hands on hips, beamed proudly with a ten pound trout hanging off her tongue. I'm sure there are lots of stories about Shelly and her tongue. Lots of softball locker room stories. 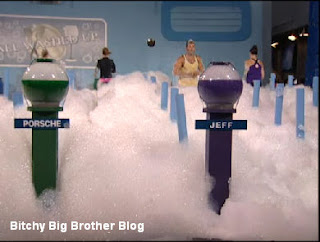 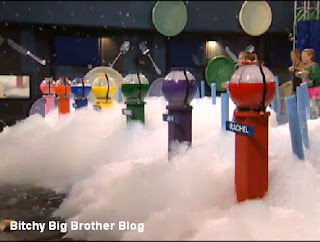 The suds kept building and the rain kept falling. Since an injury was the only way Big Jeff would slow down and give Porsche a shot at winning, Big Colette crafted a quick and rudimentary "Break an ankle, Jeff" spell. No matter who many virgins Big Colette sacrificed or how far Big Colette sprinkled her hemlock, Big Jeff just wouldn't slow down and fall. Briefly, he choked on some suds and Big Colette takes full credit for that, but it wasn't enough to effect the outcome. 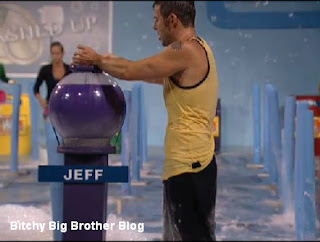 And so it is with great sadness and regret that Big Colette tells you that Big Jeff is our new HOH. 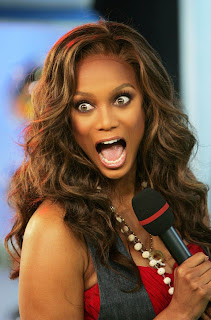 So Big Jeff is in charge and Kalia & Porsche know they're in a little bit of trouble this week. Kalia beaches herself on her bed and says, "Oh well. If one of us goes home this week, then the stress will be over." Como what? Kalia is ready to give up that quickly? Porsche disagrees and says that she doesn't want to leave the game without winning at least one HOH. Kalia sighs in response and fingers a tub of frosting underneath the covers. If Big Colette heard Kalia was ready to give up so easily, Big Colette would've hightailed it right up to Big Jeff and told him what Kalia said. Big Colette would do what those bitches on America's Next Top Model do. Whenever they hear that someone really doesn't want to be there, they march up to Tyra and tattle. Since Tyra hates a defeatist attitude, she sends home the bitch who doesn't appreciate the opportunity she's been given. As a result, the negative energy is gone and the smizing can continue. Problem solved.

Big Jeff gets his HOH room and everyone does that sappy girly, "Awwwww!". It's not just a normal, "Awwww!" It's one of those, "Awwww's!" that go up a few decibels at the end. Like when girls see a litter of puppies... "AwwWWWW!" Annoying. 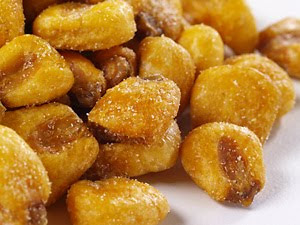 Anyhow, Jeff gets a letter from his brother, some chapstick, a t-shirt, beef jerky (which Adam tries to shove down his pants), cereal (which Jordan immediately confiscates), a cheese platter and corn nuts. Now, Big Colette takes issue with the corn nuts. Watching and listening Big Jeff pop them one by one into his giant trap was about as appetizing as listening to BB11 Natalie gnaw on a log of taffy. Excruciating!

After the initial merriment dies down, you can tell Jeff & Jordan just want to be left alone. Jeff has no desire to talk game and Jordan has her face half into a bowl of Lucky Charms. The problem is that Shelly & Rachel have no intention of leaving. They both want to get a little face time with Jeff as soon as possible. A week of sucking off Brendon has loosened Rachel's lips and she's in full on smooching mode. She says to Jeff, "Aren't you so excited?! Thank god!" She tells him how well he did in the competition and wonders where his head is at as far as nominations go.

Meanwhile, Shelly is waiting on Jordan hand and foot and is in the kitchen getting the princess some iced tea. She bitches to Daniele and Kalia about how annoyed she is with Rachel. She says that since she's off the block this week, she'll lay down the law to Rachel and tell her to cut out all of her antics. Big Colette was surprised at how open Shelly was in admitting she's safe this week, but couldn't wait to see Shelly lay into Rachel.

Big Colette wouldn't have to wait long because as soon as Shelly delivered the iced tea to Princess Jordan, she turned to Rachel and said they needed to talk. Shelly says she's sick of all the devil looks Rachel is giving her. They're on the same team and they should be supporting each rather than talking about one another behind each other's backs. Shelly says it's not her fault she was on the block against Brendon and won. *bites fist* Shelly tells Rachel that it's because of all of her hard work that Rachel has remained safe for this long. Shelly takes all the credit for keeping Rachel in the house during Kalia's HOH (as she should). Rachel sits in stony silence and doesn't say a word.

Seeing that Rachel has no intention of speaking, Jeff & Jordan jump in and say that they agree with Shelly. They want to start this week off with a clean slate. It's important they all support each other and work as a team. Shelly interrupts and says that when she hears others in the house talking about the private conversations she's had with Rachel, it makes her angry. Shelly expected a thank you from Rachel and all she got was devil looks and squinty eyes. Again, Rachel says nothing. Jeff begins popping corn nuts in his mouth and Big Colette starts to go a little mad.

Shelly eventually leaves the room and Rachel laughs, "Oooook." Jeff stops her before she can anything bad about Shelly and reiterates how they need to support each other. Rachel drops the Shelly issue for the moment and turns the conversation back to nominations. The one question on everyone's mind is whether or not they should just go ahead and nominate Daniele or backdoor her. Daniele has the Veto Ticket so she'll play in the POV regardless. Jeff worries that if they try to backdoor Daniele and she wins the POV, she'll take Porsche or Kalia off the block and Jeff will be forced to put up one of his own alliance. He asks Rachel if he were to put up Shelly, would Rachel hold a grudge and use it as an opportunity to get her out of the game? Rachel assures him that she'll vote however he wants. The goal is to get one of the three girls (Daniele, Kalia, or Porsche) out of the game. Rachel seems to be pushing for Porsche to go. She says Porsche is good in physical competitions, but we all know it's because Porsche isn't her lap dog anymore.

So, that's where we stand. Jeff is targeting the three girls, but wonders about how to nominate Daniele. If one of the three have to go home this week, Big Colette hopes it'll be Kalia. What do you guys think? Comment it out bitches and have a great day! Also, be sure to make all comments in the third person. Please preface your names with the word "Big". Thank you.