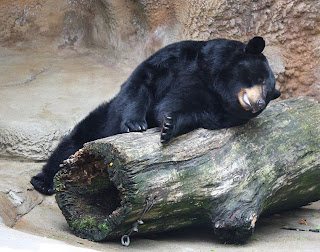 If J-U-DD was Native American, his name would be - Wounded Bear Walking Into The Distance. Wounded because he never saw it coming. Wounded because it was a surprise attack. Wounded because that insufferable Jessie is still around and he isn't! Keep your chin up, Wounded Bear. Ahummina hummina. Who knows? You might even get to come back. It is a well known fact that wounded black bears awaken from their hibernation perfectly healed. Jury is your hibernation, J-U-DD. Use it to heal. And when you awaken, ahummina hummina, girls from here to Wal-Mart will be throwing themselves at your feet. Let's recap, shall we?

A fast paced night filled with cheers and tears left a lot of Big Brother fans waking up with sad faces today. Namely, McCrae and Andy, but more on that later. Let's tend to some housecleaning first. So, Candice went home with a unanimous 7-0 vote followed by Aryan win HOH. Aryan nominated Spencer and Jessie for eviction. The blonde powerhouse continued her winning streak by also winning POV. Here is where things get interesting. Over the week Amanda has convinced herself that J-U-DD was up to no good and working against her. Since Amanda pretty much runs the house, Aaryan used her POV and replaced Jessie with J-U-DD. Ugh! Why?!? Yes, I am an Amanda fan, but, no, I am not happy about this. If I have to listen to Jessie analyze another one of her stupid dreams, I'll kill myself. Long story short, J-U-DD went home 6-0. 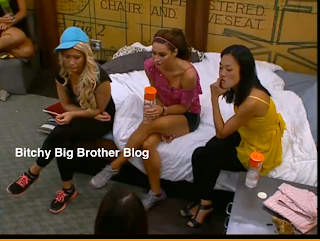 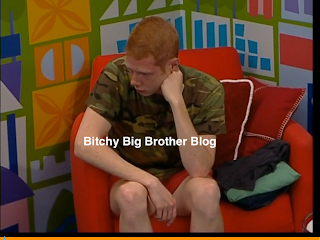 So, everyone is sad and quiet. We see Andy in the corner wiping away his tears and questioning whether or not he made the right decision with his vote. Someone in the room breaks the morose silence and says, "He went out in his bear shirt." Amanda asks Elvira (Elissa) if Candice was wearing Elvira's belt when she was evicted (Candice has a nasty habit of borrowing other people's things without asking). Elvira replies in the affirmative and says she'll get it back from Candice in the Jury house. An interesting statement, if you ask me. Does Elvira assume she won't make it to the final two? 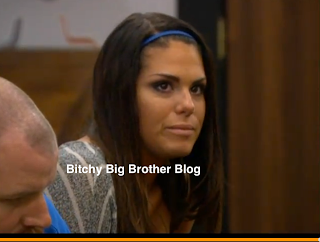 Speaking of Amanda, she also starts to cry and says that J-U-DD was the biggest BB fan next to McCrae. BUT, he was in a shitload of alliances - including one where he had a final two deal with Aryan (This is mainly why Amanda wanted J-U-DD gone. With J-U-DD out of the picture, she can have Aryan to hersself.) Amanda tells the group that she is convinced J-U-DD was trying to get her out of the game (Not really. Not yet. Jessie has been though.) Still, love or hate Amanda, she has successfully run yet another HOH. 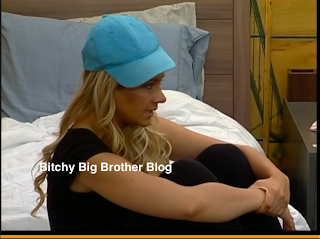 And then we have VaGina (GinaMarie). VaGina, in her bright blue not-Nick's hat is mad that Candice went out like a slag. She's not classy, yo! Sta-en Island represent! I need to interject here in order to discuss another misused word. Today's lesson is about the word "classy". Candice thinks she is classy and VaGina thinks she is classy. Sorry home skillets, neither of you are classy. When trying to decipher whether or not someone is truly classy, ask yourself, "Would Catherine Deneuve do that? Would Kate Middleton shriek at the top of her lungs like that?" If the answer to either of these questions is no, then you are NOT CLASSY. I can freely admit that I, too, am not classy. As I type this, there is an empty yogurt next to my bed and a thong thrown on a chair. Would Kate Middleton do that? Probably not.

Back to VaGina... VaGina is mad Candice went out like a piece of trash since VaGina left her such a nice goodbye message. VaGina then, for reasons only known to herself, says, "I live wit my mom and drive a piece of shit car! I live in a piece of shit room and wear blue contacts!" I don't what that has to do with the price of tea in China, but there you go. A little VaGina wisdom to get your day started.

Meanwhile, Andy says that voting out J-U-DD was the hardest decision he's ever had to make. Helen jumps in and they both tell Jessie that they couldn't let her know about the plan to get rid of J-U-DD. Andy tells Jessie that J-U-DD really wanted her out of the game - what's wrong with that?! Jessie replies, "Why me?!" Helen mentions that it had something to do with Howard (?). Amanda then enters and tells the group that J-U-DD would tell her things and then tell her not to tell Andy about it. Jessie seems pleased to know that everyone was trying to protect her (they weren't. Amanda was protecting herself) and she actually appears to have forgiven Amanda for all their past b.s..

Aryan then enters and laments, "Two members of Jury hate my guts!" Helen quickly tells her that it was the biggest move in Big Brother history. Aryan sighs and says that she is glad she won the HOH she did. She didn't want to win the next one. She says she has slept up in the HOH room too much already. 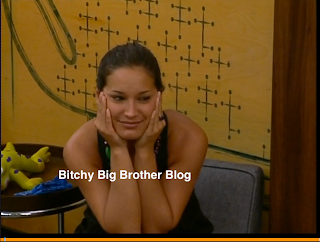 The sadness then suddenly turns to relief. Andy is relieved to have the $13,000 he'll make since he lasted until Jury. He quit his job before entering the game and needs that money. Jessie, too, is relieved. You know who's not relieved? Me. ME! When Jessie is happy, I feel all sorts of things. Relief is not one of them. 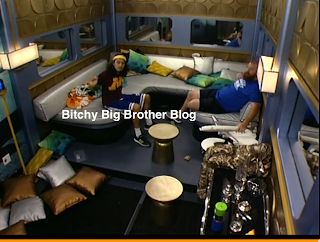 But then, THEN!, the camera quickly switches to the cockpit where one lingering sentence hangs in the air. McCrae is heard whispering to Spencer that Amanda will beat him and she has to go home. OH. MY. GOD. Amanda and Andy then enter the cockpit and the conversation turns to Howard and Eyebrows (Kaitlin). Aryan and VaGina then enter and both bitch about Candice's speech. Aryan then says Candice is a racist which totally makes me feel all warm and fuzzy inside. Mean girl Aryan is my favorite Aryan. I prefer her over sweet and nice Aryan any day of the week. The room then compliments Spencer on his speech during eviction.

VaGina then tells Andy that she heard J-U-DD saying his name. Andy stares back at her very confused. Basically, VaGina has no idea what she's talking about. VaGina NEVER has any idea what she's talking about. She says, "I don't like to tawk. Conferdentialiality and all that shit. I ain't no fuckin' rat, but J-U-DD is gone so..." *scratches head* Umm, thank you, VaGina. Thank you for your contributions to society.

Back in one of the bedrooms, Elvira and Jessie now want the Diary Room to start giving them Adderall. They blame all of Aryan's wins on Adderall which is ridiculous because look at Amanda. Amanda takes Adderall too and she hasn't won shit! Plus, you should know, that just the night before Elvira was busy telling everyone that Adderall is like crystal meth. Elvira is a twit.

Speaking of Amanda not winning any competitions, she lost another one last night. The second HOH competition was last night and, get ready, heyyy Andy won! Andy is overjoyed, naturally, but Amanda became extremely upset because she still hasn't won anything. Helen tries to console Amanda and tell her that she is the best strategic player in the house. Helen says that she thought she'd be good at everything too, but it turns out that she's not.

The day ended with McCrae crying over J-U-DD and claiming that his game is over now. Amanda tries to console him saying that if he makes it to final two, J-U-DD will definitely vote for him. She also tells him that if they both make it to final two, she definitely won't win and she's ok with that. She really wants McCrae to win.

So, what did you think of last night's show? What's up with Aryan kicking ass in all the challenges? Do you think a Jury member will return to the game? Will McCrae start plotting against Amanda? Comment it out bitches and have a great day!