Come Play With Us 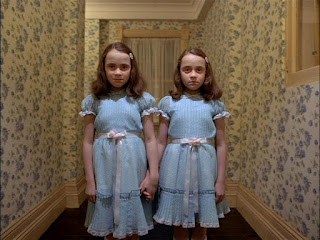 Tia and Tamara, Mary Kate and Ashley, Matthew and Gunnar... since the beginning of time, twins have delighted and fascinated. Sometimes they speak secret languages. Other times they meet at sleep away camp and switch places. But whatever hijinks a set of identical twins find themselves embroiled in, it is guaranteed to be a laugh a minute romp. The same is true, here, in the Big Brother House. Production secretly plopped in the most fraternal looking of identical twins and the house has rebelled. It has become a united burping farting life force - like that house in Poltergeist - and it wants those twins out. OUT! Hold on to your shared placentas, bitches, it's time for a recap!

Before we get to all the overnight shenanigans, let's take care of some light housekeeping. Our HOH Shelli had nominated Johnny Mac and Day for eviction. Johnny Mac won the POV and removed himself from the block. Shelli has (thank god!) put Merry Meg up in his place. I am not a fan of thee faire Merry Meg. Her incessant smiles and constant need to be in a supine position are signs of weakness in my eyes. She has yet to do anything interesting in the house and, therefore, I think her time would be better spent at the bottom of a lake with large cement blocks tied around her ankles. 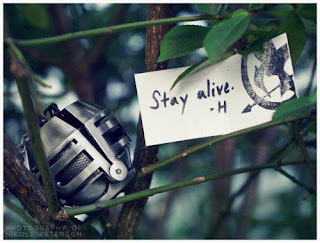 Day on the block has sent cries of injustice throughout the BB fan base. It's like April in Baltimore out there in the #BB17 hashtag. Fans wondered if perhaps the Kathy Griffin Last Laugh Twist could save her. Day herself turned the camera on numerous occasions begging for a Coup D'etat or for Haymitch to send her some ointment for her burns. Look, I want Day to stay too. I find her to be incredibly entertaining, but I don't want there to be any cheating! I hate it when Big Brother interferes. It is an insult to fans. Hello Clown Shoe?! What I do want is for Day to get off her ass and start playing the game. I want her to campaign for votes and make deals. She is most certainly not in an impossible position. With a little hard work and smooth talking anyone can find a way to save themselves, but it requires effort. Effort that Day doesn't seem all that willing to give.

This brings us to yesterday when the feeds when down for a spell in the middle of the afternoon. Was this it? Was this the Last Laugh? Yes, indeedy it was. We don't really know how it worked or exactly what went down, but we do know that Day got the 7th call which means that she gets to nix 3 votes. Day's victory made Clay think that the game is rigged. And, let's face it, it is a tad convenient that Day won, what sounded like to me, a game of chance. But you know me, I think everything is a conspiracy with Production's sticky syrup-y fingers all over it. Conspiracy Corner!

Nonetheless! Day won the Twist. Some fans think it'll save her. Others think it won't make a lick of difference because she still doesn't have the votes to stay. My opinion is somewhere in the middle I guess. The Twist victory certainly helps, but Day still needs 5 votes. I think they're perfectly feasible to get, but not unless she gets off her ass and starts campaigning. 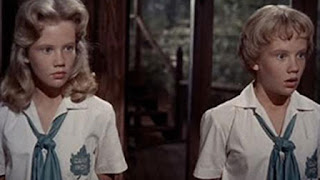 And this brings us to yesterday afternoon when, all of a sudden, Day mentions that she thinks Liz is two people. Liz and Julia definitely switched places yesterday and Day has taken notice. She says that one of the twins is thicker than the other. One has a skinny face and the other one has a fat pie face. Day takes her theory to Jason who wholeheartedly agrees with her. Jason says that one of the Liz's talks to him and the other one doesn't. Plus, he's noticed that one doesn't fit into her jeans quite as well as the other one does. The two decide to question Liz on earlier conversations that have taken place in order to trip her up.

If we fast forward a bit into the night, Jason has now become obsessed with this twin thing. He is absolutely convinced that there is a Skinny Liz and Chunky Liz. Day had originally wanted to keep her discovery on the down low in case she could use it , but young Jason is the chatty type and the lad needs to gossip. He heads into the Have-Not and awakens Merry Meg from her 85th nap of the day. He tells her awl about Skinny Liz and Chunky Liz and how Chunky Liz is much nicer than Skinny Liz. Merry Meg widens her eyes at this information. Day then enters and confirms that two Liz's are running amok. Even their eye color is different. They tell Merry Meg to study Liz closely. Ok hold up! Of all the people to tell about Liz, why would you tell the other bitch on the block? I haven't the foggiest how this twin revelation can help Day stay in the game, but I feel like it was a little reckless to tell Merry Meg. If your ass is on the line, you should use any advantage you have to get votes to stay. Am I crazy? 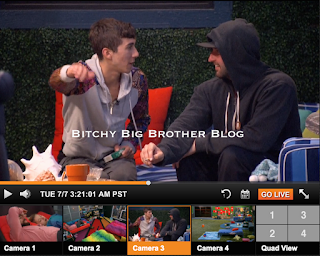 Fast forwarding even more into the wee hours of the morn, the Twin Twist is still in the forefront of Day and Jason's mind. Especially Jason's. He just can't wait to squeal and spill the tea. Sitting in the backyard we have Jason, Day, Jeff, Merry Meg, James and Jackie. Jason begins by clapping his hands and jumping up and down. He starts, "Day came to me and said this bitch..." And then the feeds go down and go to Jerf. WHAT ARE YOU DOING PRODUCTION?! GODDAMN YOU!!! 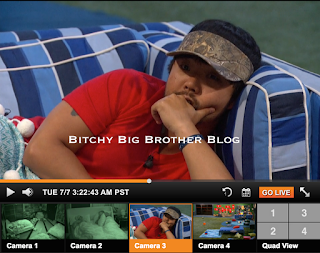 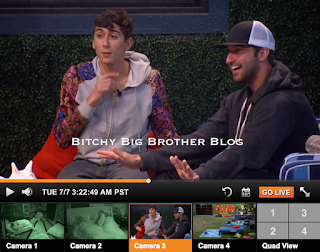 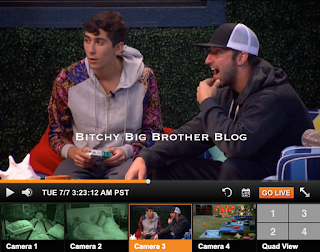 Almost a full two minutes later, the feeds return. Jason is still kicking and screaming all over the place, "They-ah's two of 'em! They-ah's two of 'em!" James suddenly recalls a conversation he once had with Liz where she said she had a sister who looked like her. Jason chimes in, "I bet she does!" Doofus Jeff interrupts and asks, "Wait, are we just being conspiracy theorists?" Merry Meg replies, "No! We might be crazy, but we're not that crazy." She then tells a story about how one Liz didn't remember the details of a story once told to the other Liz. Day confirms they've tripped up Mystery Liz a bunch of times over inconsistencies in what she can recall. Listening to everyone compare stories, Jeff finally starts to believe them. Jason once again leaps up off the couch, "It's a fact! Look at awl the cam-rah's watchin' us!" Then Doofus Jeff asks, "Do you have a Sharpie? We can put a special mark on her." Everyone promptly laughs at the Doofus. 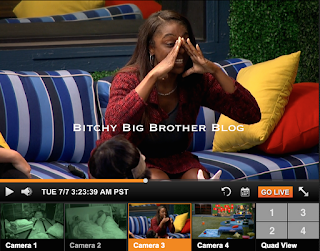 Day then takes it upon herself to describe in detail how the two Liz's are different. One has a more chunky face. The other has a more pointed nose. The Skinny One's eyes are... Jason then interrupts, "The Skinny One is he-ah tah-day. The fat one was he-ah yestah-day. They switched tah-day when they cawled her to the Diary Room. I am positive!" Day continues to try to explain the nuances of the Skinny vs. Chunky Liz differences, but Jason keeps interrupting her. He again jumps up and says that in Big Brother 5 if they made it 5 weeks, both twins get to come in and play the game. Listening to all of this James comes to a realization himself, "So that's why she's always sending me mixed signals." Dude, shut your hole! Neither Liz wants you! Neither Liz will ever want you. 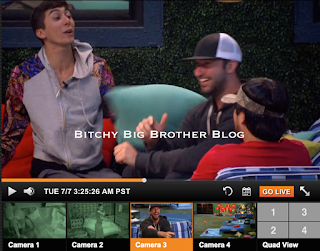 They group continues to dissect Liz's memory skills. They tell Jeff how she couldn't remember who she played the night before on the podcast (the house does a fake podcast at night). They tried quizzing her and she couldn't remember until Jackie jumped in and gave her the answer. Apparently, in the last podcast Liz played a drunken Ellen. In tonight's podcast, Liz didn't participate at all. Jason says, "The fat one is funny. The skinny one is here to be in S.I. (Sports Illustrated)" Doofus Jeff says, "The fat one wants to get down." Jason immediately smacks him with a pillow, "We need to get these bitches out! This is the twist! No one wants to screw you!"

Merry Meg then chimes in that they should change the names from Fat Liz and Skinny Liz because those names are rude. Jason suggests Thighs Liz and No Thighs Liz. 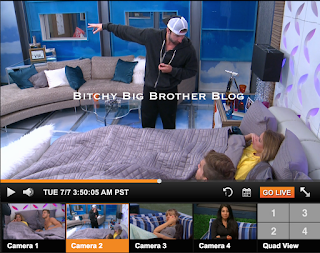 The backyard conversation continues for another half hour, but let's leap ahead to where Doofus Jeff is in the HOH filling in Shelli and Clay on the Twin Twist. He tells them everything Day and Jason were saying out in the backyard about the differences between the two Liz's. Shelli says that every time the girls have a nail party, Liz always paints her nails the exact same color while the others switch up their colors. Shelli's voice begins to rise with her excitement, "This is so cool!" Shelli asks Jeff when he first began to notice all of this. Jeff says today because she wasn't as flirty as she usually use. Dude, you are a doofus! NO ONE IS FLIRTING WITH YOU. And let's not forget that Jeff thought this was all a conspiracy theory less than an hour ago. He's such a creeper. 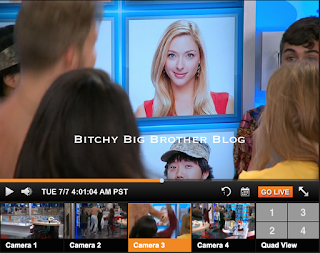 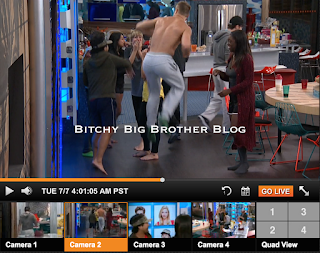 So now that almost the entire house knows, they all meet at the Memory Wall to do some final investigating. It is unmistakable. There are TWO Liz's! The group giggles, high fives, jumps and whoops. Jason announces, "I'd bet my stipend on it!" It's a fun scene where the group is thinking up all sorts of funny ways to tell the Liz's apart. They could mark her, they could cut her hair, they could hide her shit, etc. If you haven't gotten your Live Feeds yet, today is the day to do it. The house is bubbling with excitement over how they'll trip up Liz. Each HG is taking weird ownership over the discovery and is determined to prove the multiple Liz's once and for all. It's going to be awesome!

And, don't forget, if you need to do any shopping at Amazon, I'd appreciate you getting there via any of my links on the right hand side of the page. Thanks!
Posted by Colette Lala at 11:11 AM