My Name Is Slim Julia 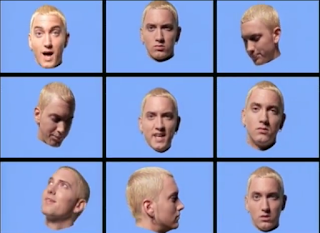 Under the cover of night. Under the polyester of Ikea. Under so much stress she just couldn't handle it anymore! Julia, bony and pointy, covered her face with her hands and said the magic words. 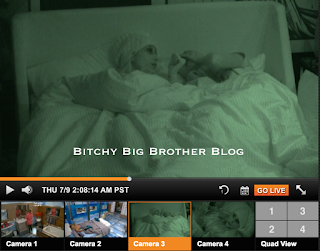 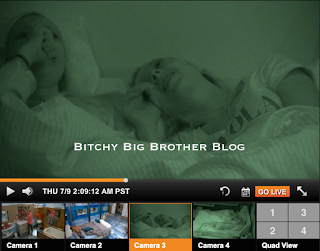 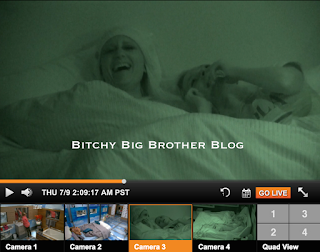 And boom! There it is. Vanessa listens to this and covers her mouth with her fist. The two start to giggle uncontrollably because, seriously, how weird is it to hear a bomb like that? The two then decide that Austin has no idea and that eventually they'll have to tell him. Vanessa advises her not to tell Day anything because "you can't fucking trust her." Vanessa then tells her not to sleep so much and to definitely wear more hats because her roots are different from Liz's. She asks when the next switch will be. Slim Julia tells her that Production controls it, but that she thinks a switch will take place tomorrow (i.e. TODAY). 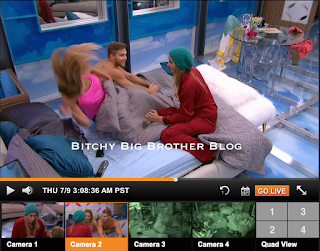 With the magic of time and space, we fast forward about an hour. Slim Julia has given Vanessa permission to spill the beans to Shelli and Clay. And spill the beans she does! Shelli hears the confirmation and leaps into her bed with a creepy excitement. Clay, meanwhile, sits and smiles stupidly. Vanessa tells them that Slim Julia is only telling them and Austin. She goes on, "Dude, I was in that room for like an hour. She was almost crying and I was like laughing." Hmm, I don't like this side of Vanessa. This report-everything-to-the-King-and-Queen-of-the-castle-Vanessa. Here I am waiting this whole time for her to start playing the game and who does she finally hook up with? The Dollanganger chuckleheads up in the HOH. 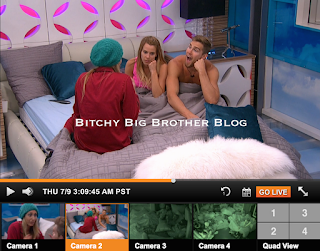 Shelli is ecstatic not only with this revelation, but with the fact that Vanessa is dutifully bringing her the information she so desires. I gotta tell ya, it sets my teeth permanently on edge watching Shelli happy. You have no idea how much I can't stand that girl. Vanessa then goes on to tell them that if both Liz & Slim Julia join the game, it's another number for them. Shelli beams and high fives Vanessa, "I love you!" Vanessa reiterates that she's trusting them and that she has a plan for how to go forward.

Slim Julia knows she can't make it to Week 5 without other people's support in the house. Vanessa tells Shelli that she and Day are the most perceptive people in the house and they catch visual clues more than anyone else. Shelli interrupts, "I like it!" SHUT. UP. Shut up, shut up, shut up! Vanessa continues that the alliance is Shelli, Clay, herself, Austin and then Liz and Slim Julia. It's really just the first four, but Liz and Slim Julia are extra votes. Shelli comments again, "This is so amazing." The girl can't help but interrupt. She HAS to get her word heard. She can't just sit and listen. She needs to take that entitled ownership she has about everything and pollute the universe with her nonsense. Let's remember - she was one of the LAST people to find out about the Twin Thing yet she has taken control of it like it was her discovery. 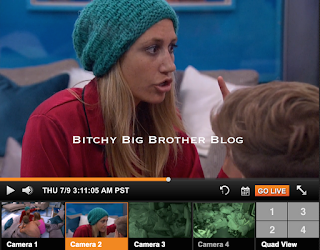 OK so Vanessa tells them that Slim Julia gets 30 minutes notice before the switch is going to happen. When that 30 minutes comes, the three of them are going to have to do some kind of distraction. AGAIN, Shelli interrupts by clapping her stupid hands, "This is so amazing!" Vanessa continues, "We're going to have to be strategic about this and help her. You (Shelli) have to talk details with her and help with, I don't know, her fucking back mole thing. She says she has a birthmark and her sister doesn't. You have to help her with that and also with the answers she's getting wrong. The discrepancies. She wants you to tell her so she can fix it and get the stories straight and come up with an excuse." Shelli moans, "I feel bad because I was trying to throw her under the bus." Vanessa says that Slim Julia is the skinnier one with more roots. Shelli adds, "You know what else? She's also breaking out and they're going to notice that. I don't want to be like, 'You have a pimple.'" Vanessa replies, "You're almost going to have to be brutally honest about stuff like that." And yet again, Shelli adds, "This is AMAZING!" I'll show you what's amazing. Your dismembered body in the Storage Room freezer. THAT'S amazing.

When Shelli started singing about her place in the game is when I had enough so I'll end this here for today. Kind of a crazy night in the house. I've got some more flashing back to do myself today. Apparently, Audrey tried to join forces with Day and flip all the votes. I mean, what?! The Evil Queen is up to her tricks again. Only, I've had a change of heart. I'm starting to like this Evil Queen and her instinctual need to lie and manipulate every second of the day. She's pathological. She's sociopathic. She's loca in the cabeza and it's pretty nuts to watch.

You gotta witness the magic (or evil) for yourself. Get of your keisters and get yourself some Live Feeds already! With new HOH's tonight - PLEASE let Audrey be one of them - it's going to be a drama filled evening. What are you waiting for?!

And if you need to do any shopping at Amazon for anything at all, I ask that you please get there via any of my links on the right hand side of the page. Thanks bitches!