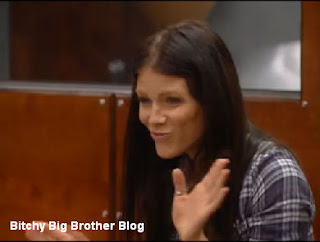 The giant lurchy hunched over king of the toe people has left the building and a miserable lip furling crimson haired soppy mess is left behind. Oh cruel and unfeeling world! To separate young love so callously, to rip the codependents from one another's arms, to keep nimble fingers and hands busy lowering a webcam just so... bless you heartless orb. Spinning through space with a mind of your own you often seem so impersonal, so cold. Today, you've shown us love. You can feel. Like William Shakespeare or Ramona Singer once said, "The earth has music for those who listen." Well, I'm listening Billy Boy and it sounds oh so sweet. Let's recap, shall we?

Kalia is our new HOH and never in my life would I have imagined I would be so happy about it. The house, like the fans, is decidedly split and I'm going to firmly take my stance on the side of Daniele Donato. She's not infalllible by any means. She's simply the lesser of many evils. I can't stand the whiny bullshit and the "blah blah blah's" make me want to stick my head into a vat of sulfuric acid, but she's better than Rachel. My god, she's better than Rachel. 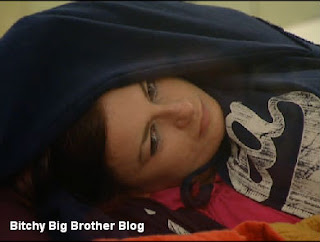 So Brendon is gone and Rachel has an awful case of sads. Boo hoo hoo. Lick it up baby, lick it up. Wallow in your misery and get comfortable pumpkin. No one likes you. No one is rooting for you. The true measure of a woman is how she acts both when she wins and when she loses. When Rachel wins, she's an arrogant holier than thou asshole. When she loses, she blubbers and plays the victim. She blames the other Houseguests. She blames CBS. She blames everyone but herself. How can I root for someone like that? How can anyone root for someone like that? True to form, last night Rachel cried and insisted that CBS has rigged the competition in Dani's favor. Then again, she also thinks CBS rigged it for her to win and she accidentally screwed up. Look, I love myself a conspiracy theory and I do think that the POV player chips are rigged, but if anything was rigged last night - it was rigged in Rachel's favor. She's always done well in that particular competition. You have only you to blame Big Red so let the thick salty tequila tears stream down your face while none of us, NONE OF US, care.

As if this wasn't bad enough, Rachel launches into her "floater" rant. He's a floater, she's a floater, you're a floater, everyone everywhere (but Rachel) is a floater. Normally, I'm a big fan of f-words, but this floater business is a little out of control. A floater is someone who bounces back and forth from side to side of the house. They switch loyalties. They go where the power goes. The only floaters in this game up until now are Adam and Rachel. Adam has been, and always will be, a floater. Rachel floated last week when she wanted to rekindle her alliance with Daniele. To call Lawon and Kalia floaters anymore is to simply tell a bold faced lie. Lawon and Kalia have chosen their sides. As a matter of fact, Lawon chose his side well before Kalia chose hers. Just because someone isn't playing with you, Rachel, doesn't make them a floater. It makes them smart and intuitive and rational. We should make up a term for somone who willingly chooses to play with Rachel in the game of Big Brother. What could we call them? How about "Bun Dusters" or "Crumb Gobblers"? I don't know. Let me know. I'm sure we can think of something. 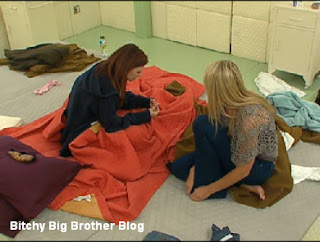 So there Rachel sat, crying and crying and crying. Jordan tried to cheer her up saying it's only 6 weeks until she can be reunited with her Frankensteinian boyfriend, but do you have any idea how many innocent women can find a penis in their email in 6 long weeks? A penis on the hour every hour comes to 1008 penises. That's a lot of dick! Furthermore, Jordan has been hanging out with Brenchel wayyyy too long. She's indulging Rachel in her "us v. them" bullshit and it's dulling her usually shiny happy dingbat veneer. Jordan is a nice girl, but you can't tell me that she doesn't see the ridiculousness in all of this? I mean, I know she's a little dim, but come on! Even Jeff looks at all the Brenchel bullshit with a roll of his eyes. 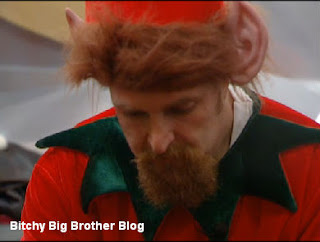 While Rachel cried and sizzled the sheets with her battery acid tears, Adam was in another room also crying. Yes, Adam. You see, this week is Adam's birthday and he really wanted to be HOH for it. He's also upset that he completely sucks at challenges and hasn't even come close to winning one. Well, I won't argue with you there Adam. I could maybe feel sympathy if you weren't such an awfully awful douchebag. That little dance you did last night? For crying out loud, it even made Julie uncomfortable! It wasn't funny and it wasn't cute. It was you mugging it up for the cameras again and contributing zero to the game at hand. To make matters worse, in between all the blubbering Adam whined about wanting a Tori Spelling birthday cake so he could eat chunks of her face. You know what? I'll bet you $1000 that Adam thinks CBS is scrambling behind the scenes to deliver him Tori Spelling in the backyard as a birthday present. I guarantee that's what he does all day. Instead of socializing and playing the game, he sits around and thinks CBS is planning amazingly wonderful 90210 surprises for the unlovable teddy bear. It's gross and it's transparent. To add insult to injury, I can see Adam easily squeezing through to the final four. If Rachel was really on an anti-floating campaign, she would have targeted Adam a loooooong time ago. Oh well Rachel -you snoooze, you lose. 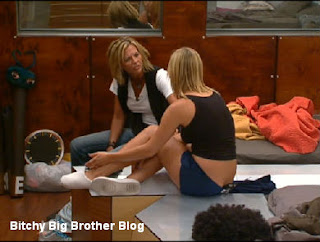 What else? What else? Oh yeah Porsche cried too. It's dawning on her that Brendon, Rachel, Jeff & Jordan have been using her (ya think?) and she doesn't understand why Rachel keeps shooting her devil looks. Those aren't devil looks, Porsche. That's just her face. Porsche explains that she voted to keep Brendon in the game and she should be thanked not ostricized. Eh, Rachel is wrapped up in Rachel right now. She's too busy worrying if Brendon will figure out how to reconnect his Skype account than to worry about how Porsche is feeling. Could Porsche jump ship and join Dani's army? *shrugs shoulders* Possibly. I hope so. Let's all kick Rachel while she down, right? *kicks a burgundy colored pillow until the stuffing oozes out* 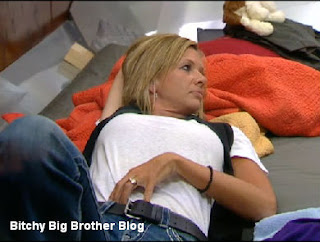 Now let's talk a little bit about Coyote Ugly. Shelly's outfit was so Maria Bello last night. I couldn't wait for her to yell at the screaming frat boys and dump ice on their heads. Anyhow, Coyote Ugly knows she's in a tough spot. She teamed up with the Oldies earlier, but after Rachel's "f-bomb" last night on live TV, Shelly is a little more than mildly disgusted. I don't think she's disgusted enough to completely bail and join Dani, but I also don't think she'd miss Rachel if she were to suddenly disappear. Shady Shelly is a little nervous and you can tell. Her ass kissing is working overtime and the rent is due tomorrow. She didn't run to console Rachel. Instead, she hung out with Kalia and Dani. She mingled with Porsche. She put in a little face time with Adam. She's telling everyone to go ahead and be happy for their achievements. Celebrate! Cavort! Be proud! She'll support all the winners and hopefully, one day, she'll get to see her precious Josie. Girlfriend is working hard for the money and it'll be interesting to see if she talks herself right into a nomination. 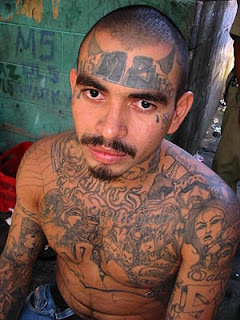 Kalia gets her HOH room and it's basically a bunch of uninterested people watching a motormouth valley girl cry herself to kingdom come. Kalia opens her HOH door and completely loses her shit. Maybe it was all the macaroni and cheese in her fridge. I have no idea. There was a photo of her boyfriend that shocked everyone. Jordan thought he'd be preppy, but apparently he wasn't. Since I didn't catch it, I'll assume he looks exactly like the gentleman in the above photo. *flashes gang sign and bangs on chest* 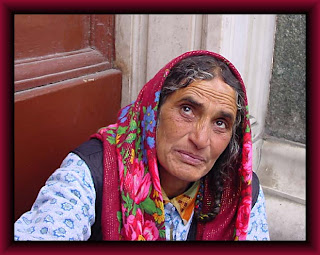 Kalia reads her letter and it's a bunch of religious mumbo jumbo from some lady named Mamushka. Since I didn't see a photo of Mamushka, I will naturally assume she is the spitting of the woman in the above photo. She probably makes a mean borscht and doesn't take any lip from anybody. Mamushka for the win.

The night ends with Rachel trying to make a deal with Kalia. She says if Kalia doesn't nominate her this week, then Rachel won't go after her

next week. It's probably true as I think Rachel has more of a vendetta with Daniele than she does Kalia. Kalia refuses to give Rachel a definitive answer and keeps saying that she doesn't know what she's going to do yet. Rachel congratulates her repeatedly and tells her she should proud of herself for taking out as many Oldies as she did. It's a thinly veiled insult wrapped in kiss assness and I'm pretty sure Kalia isn't falling for it. But, who knows? Kalia suffers a little bit from the Brenchel Bravado. She likes to gloat when she wins so any and all compliments coming her way are probably embraced and then eaten... whole.

I'm going to end this here as my car is finally ready and I've got to go pick it up. I expect the entire house to visit Kalia in the HOH before nominations and lots of incessant rambling from both Kalia's ass and mouth. It'll be interesting to see who she nominates along with Rachel. Will it be Jeff? Shelly? Jordan as a pawn? We'll see. Comment it out bitches and have a great day!