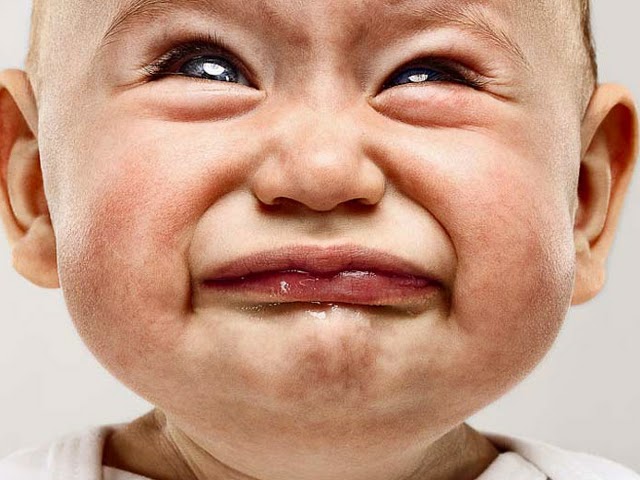 Annoying. Whiny. Selfish. The world revolves around them and, for some reason, everyone gives in to their every whim. "Gimme, gimme, gimme." "Love me, hold me, feed me." "Give all of your attention to me and don't you dare walk away!" What could I possibly be referring to? Who could possibly be so unnervingly selfish? No, dear readers, I'm not talking about Man Hands Caleb. I'm talking about babies! Those little life suckers who spread disease and scream on airplanes. I hate them! Let's recap, shall we?

The day started out innocently enough. It's POV Ceremony day and the plan is to replace Victoria with Donny keeping Jowls (Brittany) as the true target. Now, I'm not sure if you know this, but Donny has become quite the little game player. He knows alliances in this house exist and, more importantly, he knows that he is not a part of them. That Team America (fuck yeah) thing is all well and good, but Donny is increasingly dubious especially when it comes to Derrick's actions. Donny has the sneaking suspicion that Derrick is the house mastermind running all of the plays. And Donny would be absolutely right!
Try It Free! Get 24/7 access to the house PLUS more for 48hrs before you decide!

Whether it was Donny's fine-tuned intuition or something more mystical like a speaking-in-tongues phony freak named Jocasta, Donny has that not so fresh feeling that he is going on the block. The outwardly shy timid country boy takes his one last chance to convince Cody that my lover, Man Hands Caleb, should go up instead. 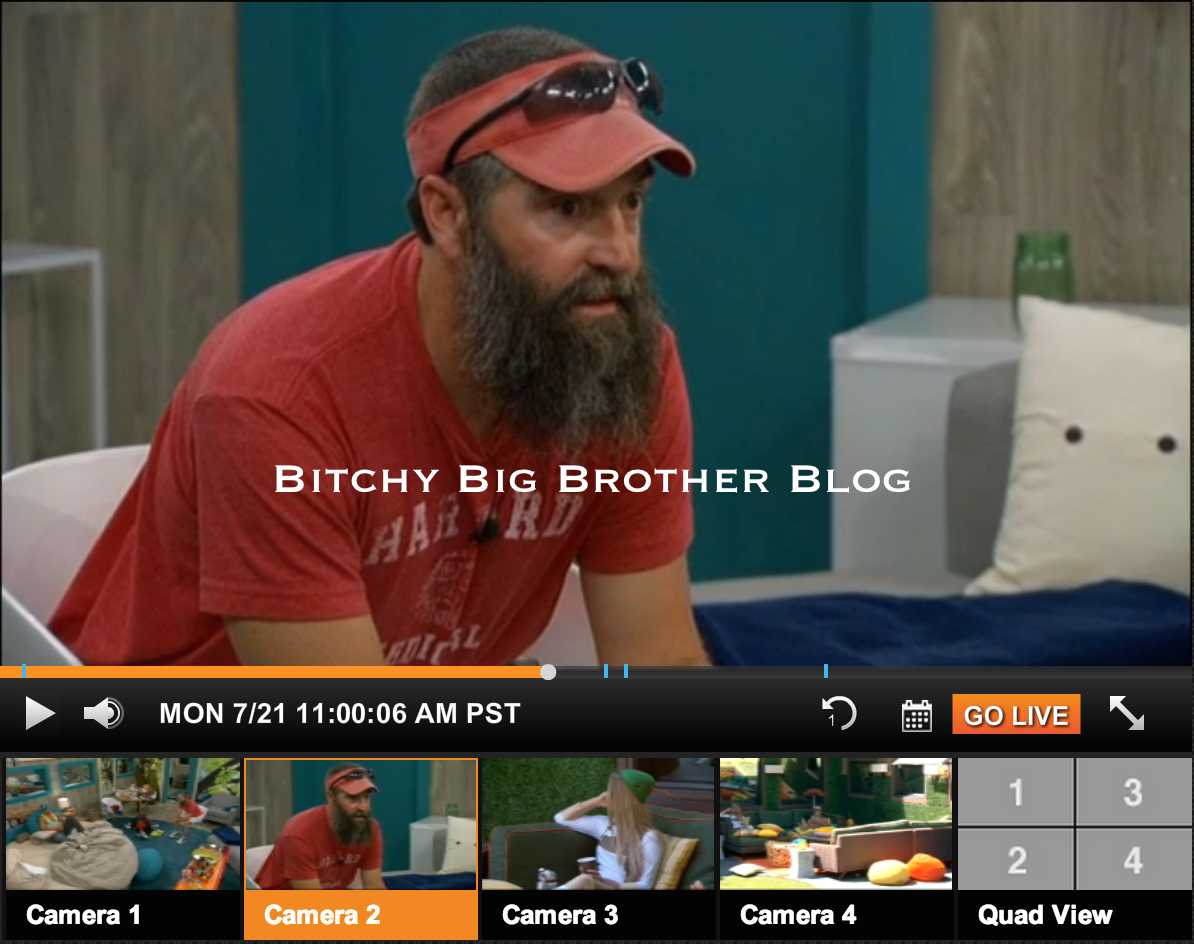 Donny goes up to the HOH to deliver a speech he has prepared to Cody. It goes something like, "I'int wawnt yew ta make uh deecijun fer yew. Don' play ether peeples games." Cody scratches his head and replies, "You gotta say more than that Donny." He then tells Donny that he has been thinking hard all weekend about maybe putting Caleb on the block (DON'T YOU DARE!), but that it might piss of some other people (YES IT WOULD). Donny nods in that hunky dory way of his and let's Cody continue to vent. You see, Cody is petrified of Caleb staying in the game and coming after him. He has this nagging feeling that next week will be a Double Eviction. Donny advises him to play for this week. He says you can't play for the weeks that aren't even here yet because you don't know who's in power.

Cody then starts going on about his brother at home and how his brother would call him a pussy and flush his head down the toilet if he doesn't nominate Caleb this week. Donny rightly takes the bait and calmly says, "Dew wut yer brother wood wawnt yew ta dew." Cody nods and says, "I think I've just made my decision." *panic panic fluster panic* 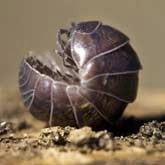 Cody then gets up and heads outside to where Frankie and Hayden are hanging out. He announces, "I'm putting Caleb up." In that moment, my world turned black. My nipples went inverted and my fallopian tubes curled up like one of those rolly polly bugs. If I don't have my Man Hands Caleb in the house, then I don't have my crazy and if I don't have my crazy, then there is no reason to live anymore. Fortunately, Frankie feels the way I do and mumbles, "I don't think that's a good idea." Hayden, however, nods and says, "Yo, I understand." (Die Hayden Die) Cody paces around some more and finally heads inside. As soon as he shuts the door behind him, Hayden says, "Yeah, that's probably not a good idea. *smacks self in head*

And then the feeds go down. I paced back and forth across my living room wringing my hands against one another. What if I lose my Caleb? What if he goes home and I don't get to see him shirtless on the broadcast anymore? What if I never hear, "I'm going Beast Mode Cowboy y'all!" ever again? It's too gruesome to imagine. 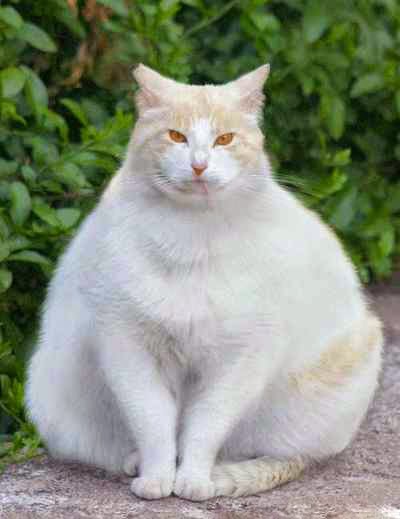 But you know what? I don't have to imagine it! It turns out that Cody is a giant pussy and didn't put Caleb on the block after all. And are we all a little bit thankful for that? Thank you Cody, you giant wonderful pussy you. You're a lovely welcoming warm pussy that we can all climb inside and curl up in. You're a pussy that just saved the feeds if you want to know the truth.

You know what this means, don't you? We have a new nickname! Cody will hereby be referred to as Pussy. So Pussy and Frankie are in the hammock swinging back and forth and talking about all sorts of pussy things. Pussy is absolutely terrified of Caleb finding out about how he almost put him on the block. He tells Frankie that he better keep his mouth shut about all of this. He says, "This better not come back to fuck me." But Pussy, pussies are meant to be fucked! Ba dum bum! 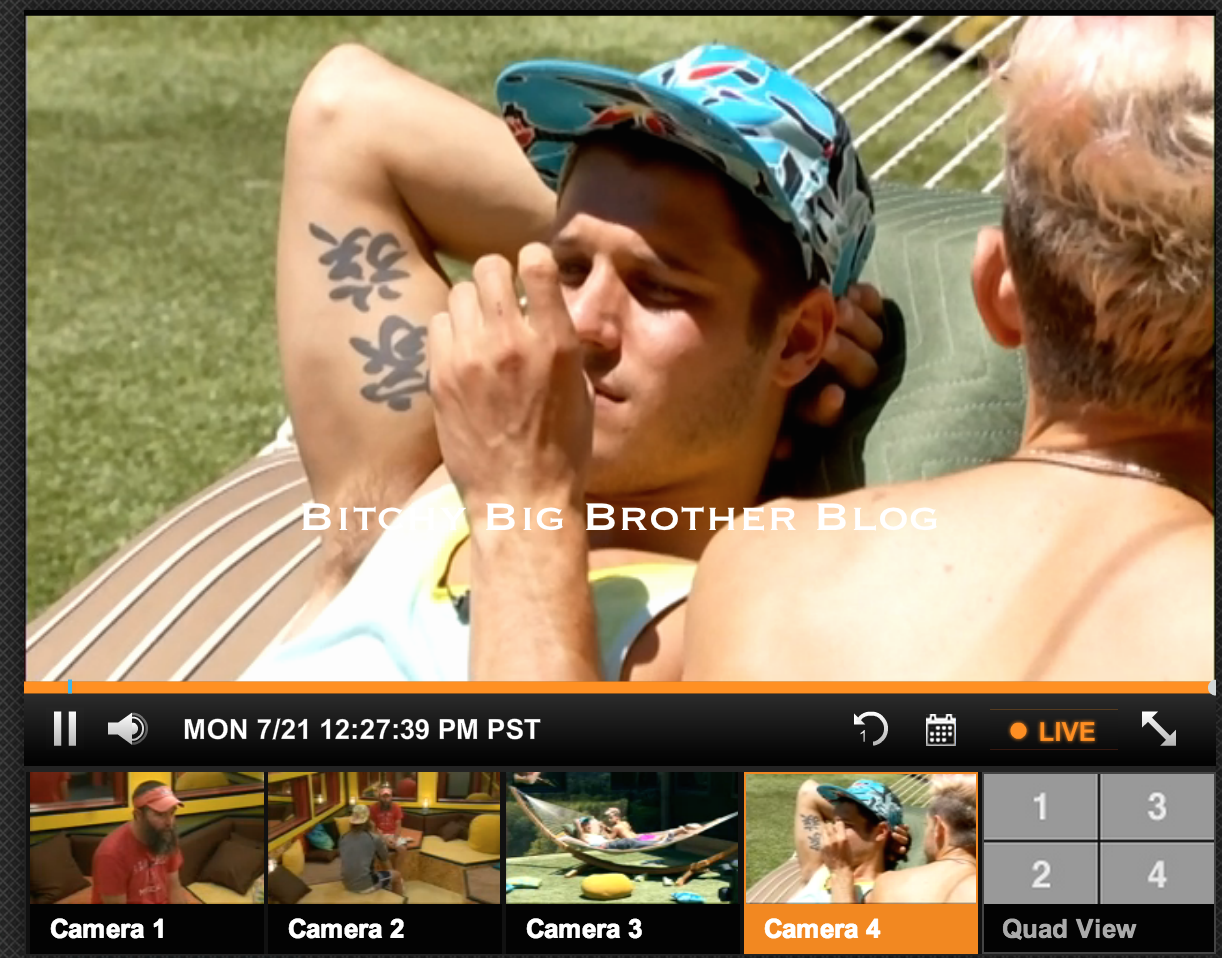 Pussy continues and moans about just how smooth Donny was went he entered Pussy's lair. I must admit that those smooth entries are sometimes nice. But what worried Pussy the most is having his brother call him Pussy when he gets home. Well, get used to it, buddy. Not only will your brother be calling you Pussy, but so will everyone who reads this here little bloggy blog. Hearing all of this, Frankie simply nods and tells Pussy, "Your brother will be proud of you."

Frankie then wonders if Jowls hinted to Donny that he was going on the block. Pussy isn't so sure and begins to hem and haw again over being such a... pussy! Frankie tells Pussy that he doesn't need to prove his manliness in the house. As a matter of fact, the move he just pulled was the most manly thing he could have done. Hayden then approaches the hammock and tells Pussy that Caleb is dumb as a rock and they can get rid of him at any time. 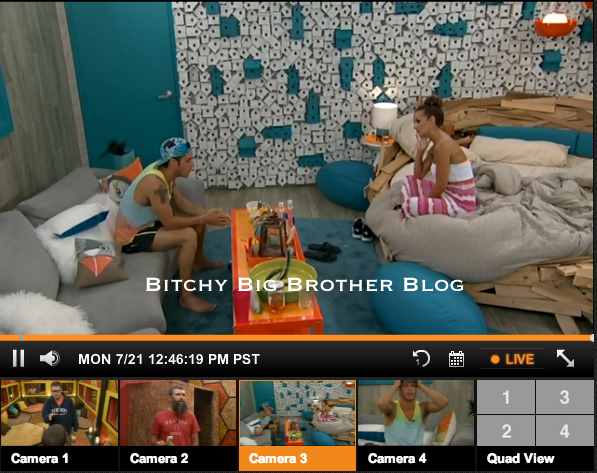 And this brings us to Jowls. Boy is she angry! With her jowls flapping in the breeze, she marches upstairs to Pussy's HOH room and begins an enormous bitch session of how it is all so unfair that she is on the block. She has kids, you see. Three of them! She came in the house and she has three kids (So?). She risked everything to come here. Her ex-husband is probably seeking full custody as she sits here right now playing this totally unfair game. Look, if you think you are in danger of having your screaming brats taken away from you, celebrate! Ha! Just kidding. Seriously though, don't go on Big Brother if you think your devil children will be taken from you. Don't hang out in bars and follow that silly recruitment whim to the very end where you find yourself on national TV for the entire summer.

I haven't the foggiest idea why people think Jowls has such a good game. All she does is bitch and whine and moan about how this is all so unfair. You know what's really unfair? Me having to listen to all of it. That's unfair! And my upchuck reflex begins to heave violently when Jowls talks about how she deserves to be there (She has kids! Kids!) when others don't deserve to be there. Look bitch, none of you deserve to be there. It's a game show. It's not a charity. You had an option to be there and you said yes so quit your bitching and start playing the damn game. 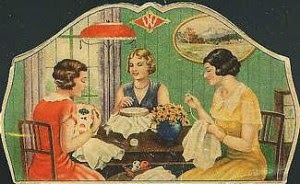 Back outside we find Caleb and Frankie sunbathing and talking about that often neglected topic: Amber. Caleb is mighty upset at how Zach keeps saying that Amber is playing the game and lying. Caleb insists that Amber is going anywhere until they get to Jury where he can lock her in a bedroom and seduce her. Zach, however, keeps saying that Amber is teaming up with the girls and starting a covert vagina alliance. Caleb scoffs at that saying that if Amber is talking to the girls, it's probably because she wants to talk about girl things like ribbons and buttons and periods.

Caleb continues and says that he really doesn't like how Zach wants Amber gone. It's not gonna happen! The other HG's might think that the Bomb Squad no longer exists, but it does because Caleb saved it with his washboard stomach and his "good talkin'." 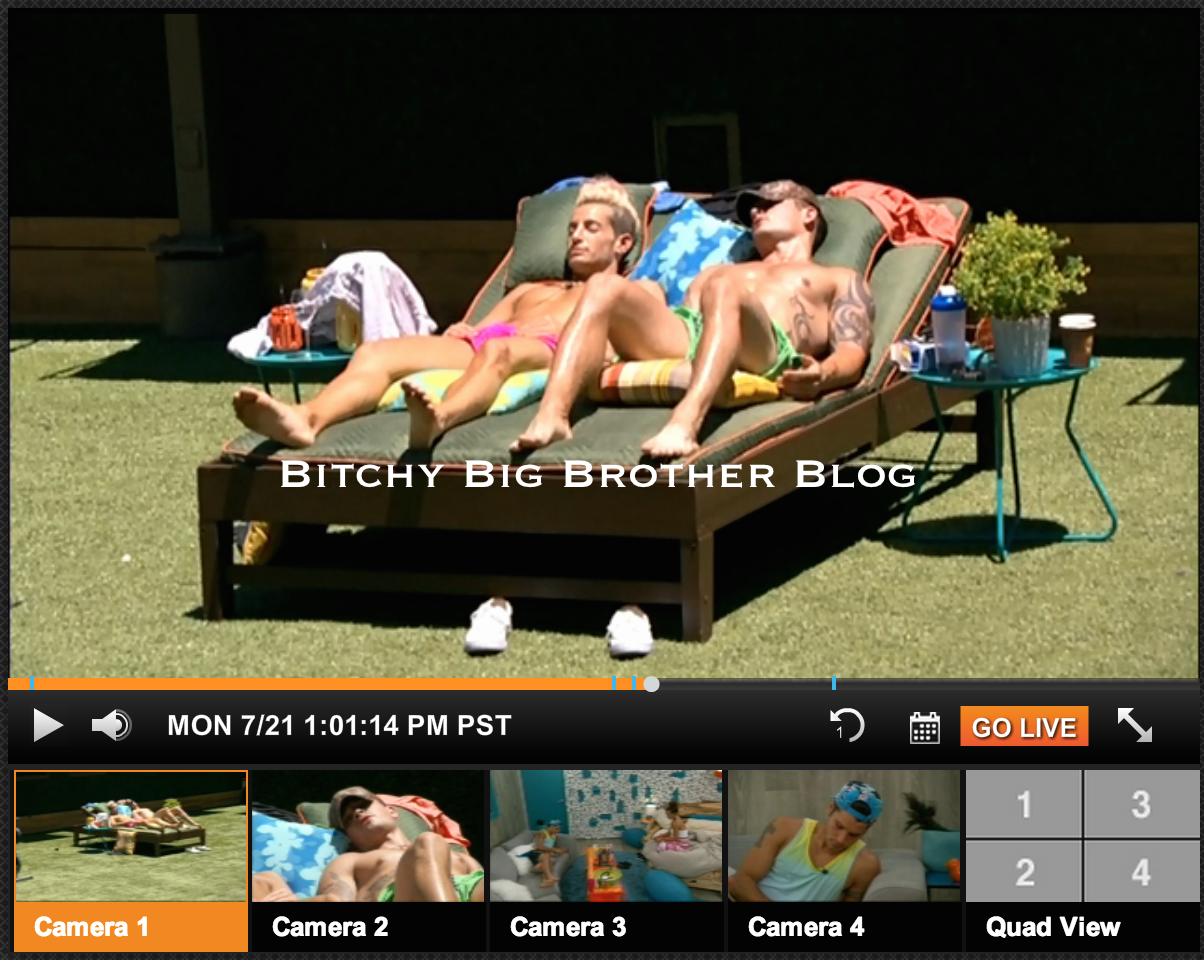 After listening to all of this, Frankie remarks that they only have to win 1 more HOH, then they're all in the Jury. Caleb says that if it's a hanging competition he might not be able to win because of all his rippling muscles. Frankie might be able to though. He probably weighs about 35 lbs less than Caleb. Frankie nods and says that lighter and leaner is best. This week he'll work on that. Caleb agrees and says that he'll eat healthy this week too. He'll eat stuff like chicken and broccoli and sunshine. The sunshine gives him his inner glow.

Frankie then asks Caleb who he'd put on the block if he wins HOH. Caleb says he'll put Jocasta and Victoria up, but on opposite sides of the HOH, not together. Caleb wants to guarantee that Victoria goes home. He doesn't want her winnin' nothin'! Frankie says that the best way to make that happen is to put her up with Jocasta since Jocasta sucks in comps just as much as Victoria does. 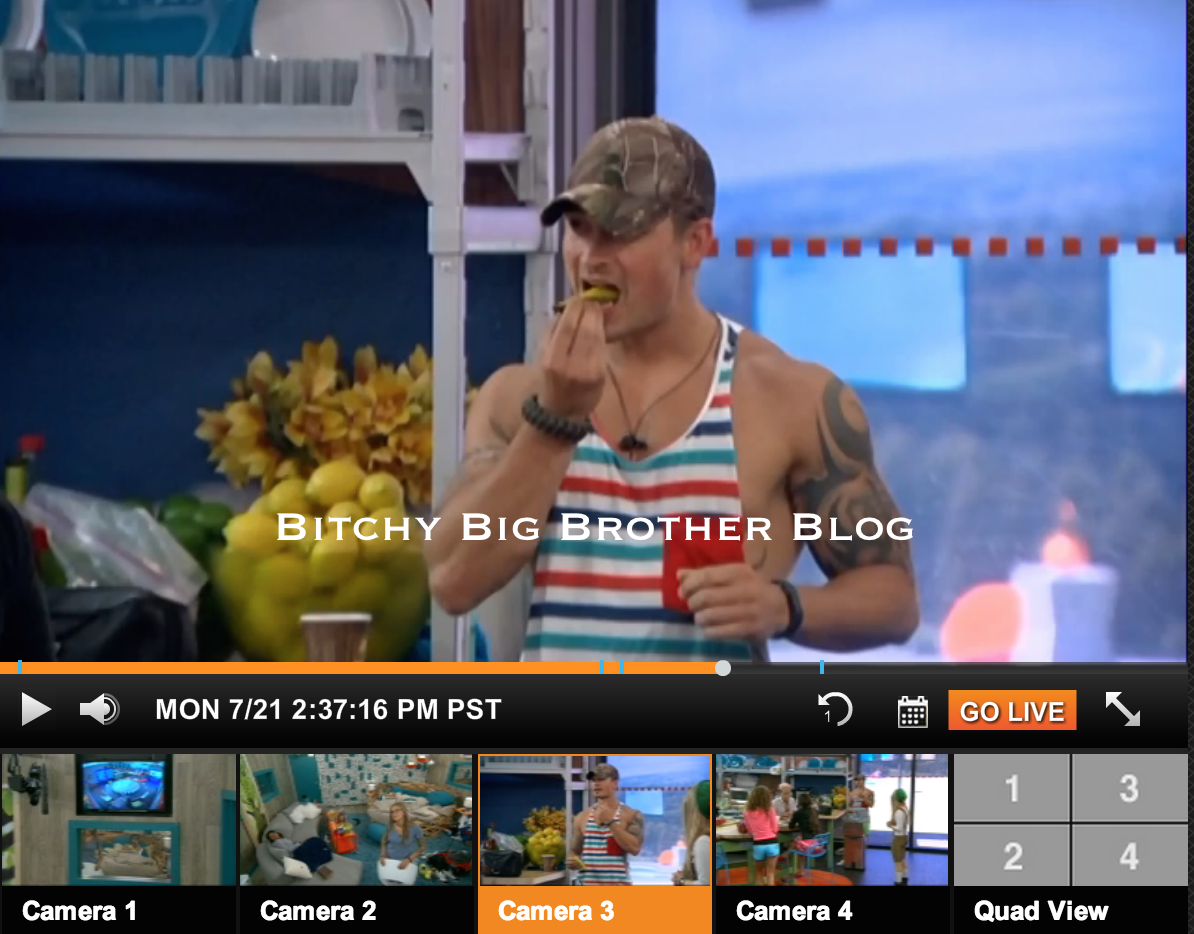 Before we end this today, I'd like to discuss an incident that took place in the kitchen. It seems that Caleb hates pickles. He hates them so much that he's never eaten one. Ever! Apparently Amber told Caleb that if he ate a pickle, then she'd go out on a date with him. Reread that last sentence. Amber is not as innocent as everyone thinks she is. She's leading the poor guy on! Well, Caleb being Caleb (i.e. desperate for a date), Caleb accepts the challenge and prepares to eat the pickle. 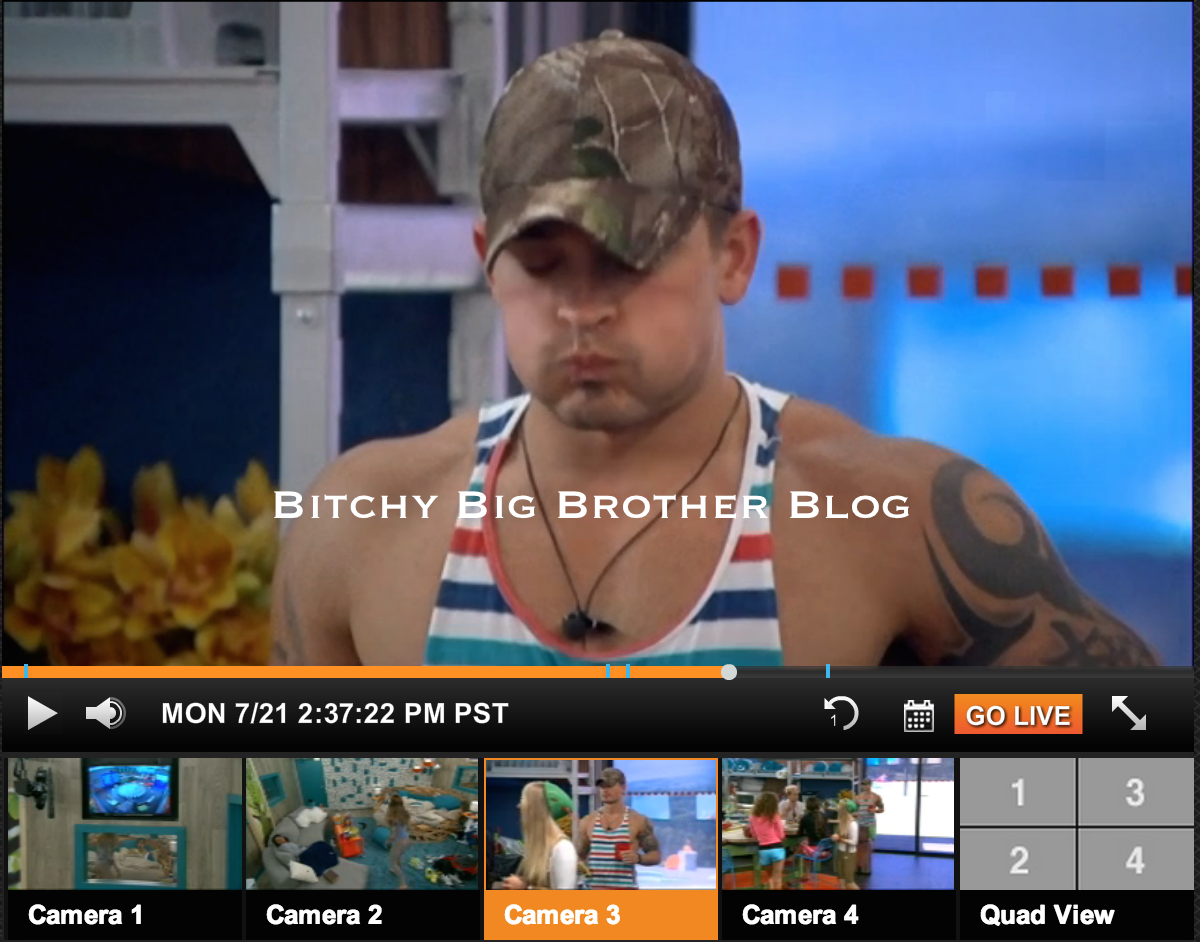 And it doesn't exactly go well. While Frankie is shouting, "Swallow it! Swallow it!, Amber whines, "You don't have to eat it! You'll get sick!" 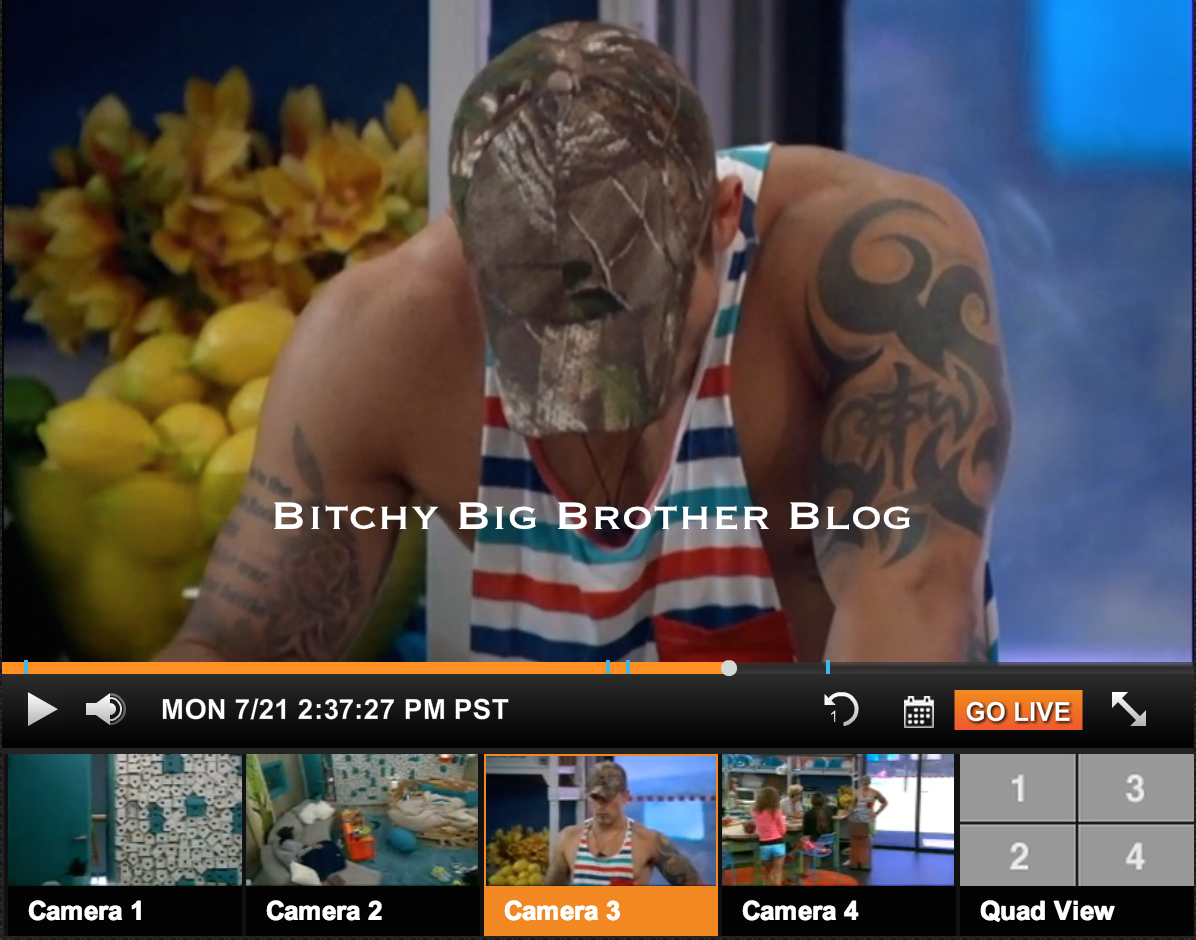 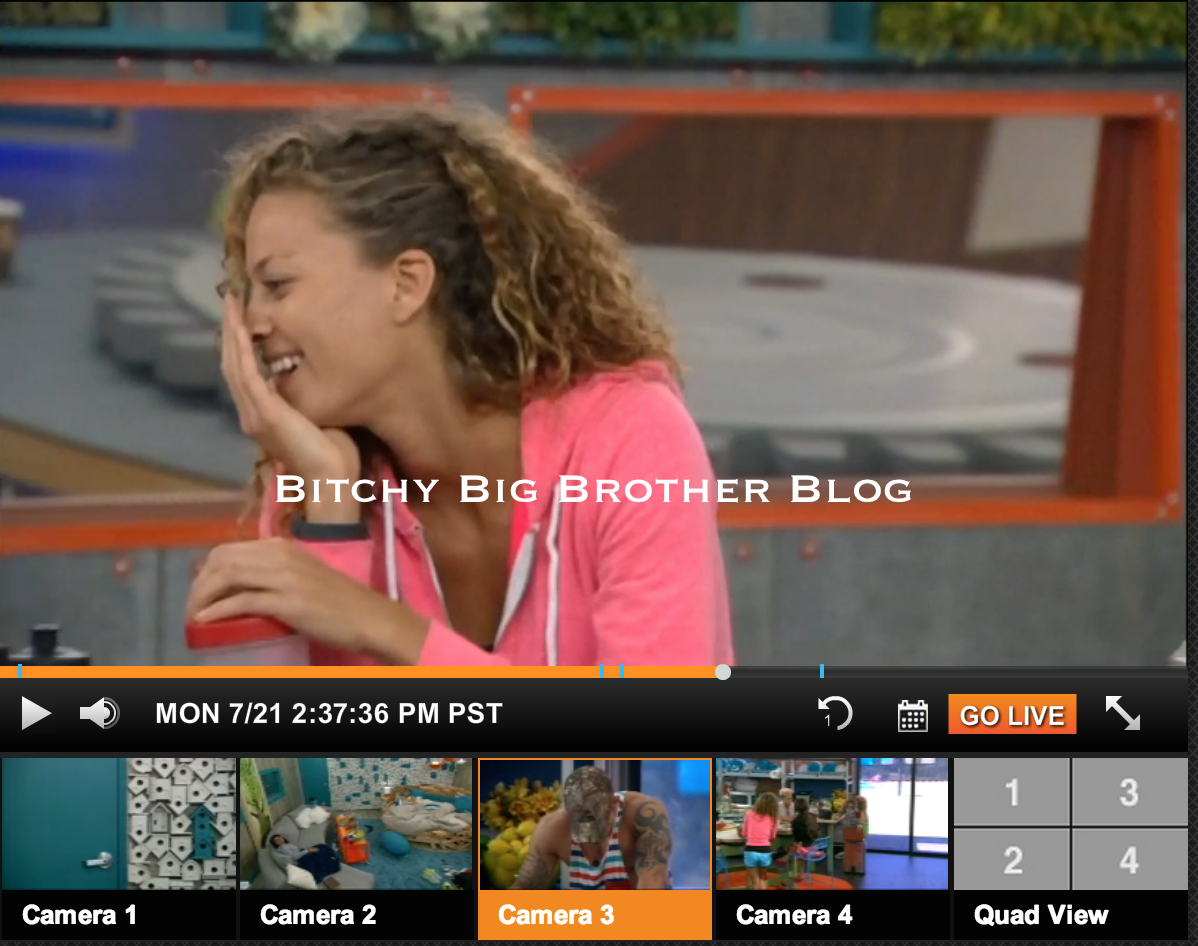 Caleb then starts to wretch and dry heave. He takes a drink of iced tea and gets back into pickle stance. Amber, with a worried look on her face, says, "Caleb, seriously, do NOT eat the pickle." Caleb then shoves the whole thing in his mouth which makes Nicole, who hates Amber and would love nothing more than to see her trapped into a date with Caleb, shout, "Ca-leb! Ca-leb!" Caleb starts to wretch so Nicole reprimands him, "No Caleb! Keep it down!" LOL She really hates Amber.

But if you know anything about Caleb then you know that he is a Beast Mode Cowboy with Man Hands. Obviously, Caleb swallows the pickle. Nicole is tickled pink and declares, "Caleb, I'm proud of you." Amber reluctantly gives Caleb a hug. Caleb tells her that the only way she's getting out of the date is if she eats a whole banana (Amber hates bananas). The scene ends with Frankie suggesting, "You guys should go on a date in the house!" I can't decide if that's a horrible or wonderfully awkward idea. Oh well. I'll think on it and get back to you.

And that is where I will end this today. So what do you think about Cody being a giant pussy? Are you as happy as I am? Will the tide turn and send Donny home instead of Jowls? Comment it out bitches and have a great day!