"From forth the loins of these two foes" - Shakespeare is in the house bitches! 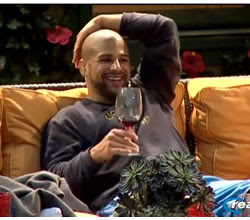 It was a long exhausting day of what seemed like interminable competitions and ceremonies. The feeds were probably down for more than a total of 6 hours over the course of the day. Let's clear up some loose ends and then move on to the magic. Late night BB was very intriguing. Lots to discuss.

First was the Have/Have-Nots competition. The Populars lost and they are pissed. Laura and Jordan were crying while Jeff consoled them. It sounds like the competition got really ugly with lots of little jabs and negativity thrown around. I'm not sure if the Have/Have-Nots was coupled with a Luxury competition or if they were separate, but Dan was the host, prizes were won, and punishments were given. Casey won a movie viewing with Chima and Natalie has to wear an army green bikini.

This brings us to nominations. Christ on a cross were live feeders pissed off about this one. It's Jeff and Laura bitches with Russell being the last to receive his key. Ronnie puppets were burned in effigy. Riots broke out in the streets. "How can the beloved Jeffy Pooh be on the block?" the frigid old hags who adore him asked. "He's so perfect. Haven't you seen him when he wears his glasses? He's like a precious porcelain puppy that you want to lick clean. Let's cancel our feeds and stuff our faces with pound cake!" Oh shut up you ridiculous crones. I realize he's given you masturbation material for the next several years, but he's really not that good of a player. This is a game we're watching after all. Either play the game or the game will play you. Jeff is letting the game play him at the moment. I like him too. I don't want him to go. I want him to get off his ass and start playing hardcore. He needs to dig in and lie and deceive and manipulate and figure out a way to stay in the game. There's nothing I hate more than an HG who gives up.

This brings us to BBAD. Jordan, sweet Jordan, is so unbelievably clueless. She believes anything anyone tells her and is, as a result, constantly shocked and surprised. Laura has been telling her over and over again that she is the main target, but Jordan is convinced they're trying to backdoor her instead. Ronnie pulls Jordan into the HOH and informs her that she is safe for at least the next 3 weeks and that there is no scientific tool in existence that can measure the hatred the Athletes have for Laura. She is their target. They want her gone yesterday. Jordan bats her long lashes, opens her pretty blue eyes and says, "Really?".

You see Jordan was brought up to give people the benefit of the doubt. Her mother instilled this mantra in her from a very early age. Sure, the boys oogled Jordan all the time, but that's only because she's a natural beauty. Who wouldn't be sniffing around Jordan all the time? She had to learn to take it as a compliment instead of what it really was - creepy men getting overly excited. Wilting Pines Trailer Park hadn't seen someone with a face like hers since Crazy Mariana Dufresne. Mariana was a legend and her ghost can still sometimes be seen out on Wilty Lake with her flaming red hair blowing behind her. Mariana just wanted the boys to leave her alone. She wanted to row her boat and smoke her unfiltered camels without a boy sneaking up on her every 5 minutes. Everyone had warned Mariana that her inflatable boat wasn't sea worthy, but Mariana knew better or at least she thought she did. The black waters of Wilty Lake swallowed Mariana that night and to this day you can sometimes hear her singing faintly in the wind. Mariana's story was Jordan's bed time story. It taught her to trust everyone and to never ever ever take inflatable boats out onto Wilty Lake.

Russell knows Jordan is overly trusting so he takes her into the storage room to have a little pow wow. Russ just wants to clear the air. He wants to assure Jordan that he doesn't hate her at all and that she has no reason to be scared of him. He just has a scary face he says. That's all. Jordan says that she feels weird when she walks by Natalie and Lydia. She feels like they all hate her and talk about her all the time. Russ just doesn't understand what it's like to be Jordan and have everyone get quiet whenever she walks into a room. Russ gives her a hug and assures her that he likes her. Little do they both know that Natalie was eavesdropping outside the door.


Jordan goes out to rejoin Casey, Laura and Jeff. She tells them about her convo with Russell. Russell shortly thereafter, having turned over a new leaf or being scared shitless over getting his key last, goes out and offers Team Jeff some wine. He joins them on the couches and begins his carefully planned soliloquy explaining how he'd just like to be able to hang out with everyone and not have to talk game all the fucking time. He knows Team Natalie is inside wondering where his loyalties lie, but he doesn't care. He just wants to be able to enjoy himself after 8 pm. Team Jeff warily begin to loosen up around Russ and together they all bitch about how some people NEVER stop playing the game particularly Natalie.

Natalie, the fiery latina who will never pick her own fight but involves herself in everyone elses, has run upstairs to Jessie to tell him that Russell is now deeply ensconced in an alliance with Jordan. While eavesdropping she heard her name mentioned and something about Russ wanting to be friends with Jordan and that was it. A new alliance had been born . This girl can weave a tale of lies like no other. Actually, I have to take that back. In Natalie's mind she really truly thinks that Russell has an alliance with Jordan. They were in the same room together for crying out loud! That's evidence enough for her.

One of the main recurring themes in the house so far is that whomever you talk to must be in an alliance with you. This ridiculous idea is perpetuated by Chima and Natalie. They firmly believe that if you are on opposing sides that you should never ever ever look or talk to one another. It's this moronic way of thinking that's made the house as divided as the Capulets and the Montagues.

So Natalie is ratting out Russell and Manbeast Jessie is just sitting and listening. I think maybe Jessie questions Natalie's sanity, but he's so cautious this year that he'll never say a thing. Jessie is so scared of going home that he's not picking fights with ANYONE. He stays away from his house enemies as much as possible. He's learned that making a big fuss over the tiniest things will get your ass evicted. I realize that most BB fans really loathe Jessie, but I'm finding it really interesting how he's getting Chima and Natalie to unknowingly do all his dirty work for him. Jessie is the king of cool sitting back and letting the drama unfold all around him. He's never to blame for anything. He never points fingers. Stories can never be traced back to him. As long as Natalie and Chima keep acting like psychotic spider monkeys Jessie is sitting pretty for a few weeks.

Back outside Russell has a new group of friends. Jeff and Casey are so through with the unnecessary drama that they've pretty much thrown their hands in the air and said, "What the fuck! Might as well have fun while we're in here." Russ and Jeff let bygones be bygones and they clink their wine glasses and laugh gaily about their disdain for Chima. I'm going to do something here that's going to anger some of my readers, but I have to give Russ props. He is ALWAYS playing the game. Don't doubt for one second that him going outside bitching about his alliance wasn't part of an elaborate plan. He is the only one in the game (save maybe Ronnie) that is playing completely devoid of emotion. Laura tried to play that way but the reins that are her heart strings got in the way (Did you see what I did there? I said REINS.). Russell doesn't care one fig for any of these people. He's going to align himself with whomever is going to get him to the next week. He sensed a possible mutiny in his own alliance so he's now laying the foundation in case he needs to jump ship.

Russell at one point went back inside to get something and as he passed Chima and Natalie at the kitchen table he said jokingly, "Are you guys still talking game?" Lydia, who was in the bathroom with Jessie and Kevin, thinks Russell is being a smart ass to her so she shouts, "No! I was sharing a story about something in my life!" Russell goes off! He says, "I wasn't talking to you bitch! This has nothing to do with you!" Blah blah blah. Knowing Russell, I know he made that much more loud than it needed to be just for dramatic effect.

It's pretty hysterical. Watch it for yourself:


Russell is slimy and he's definitely got a game plan, but he's beginning to intrigue me. Everything he does and I mean EVERYTHING has a purpose. He's so determined to win this game that he's got extreme tunnel vision. I don't think I can remember a player so blatantly without a conscience in this game. I still maintain he was touched by a priest and it'll all come out at some point, but until then I'm definitely keeping a closer eye on him.

Later Jessie, Jeff, Russ and Casey are all playing pool. They're being silly talking in some atrocious Scottish or Irish accents. They're having a hysterical time laughing and joking and finally relaxing (except Russell, he's always planning). Natalie was out in the hot tub and you should have seen the look on her face. I sat up in bed laughing so hard because I know Natalie's inner monologue must have been going a mile a minute. The little hot tamales brain was going so fast I think I saw smoke coming out of her ears. What was Jessie doing playing pool with those guys? Everything good in the world Natalie believed in crumbled and turned to dust at that very moment.

Meanwhile, Lydia was crying and complaining to the DR about how mean Russell is. Oh Lydia shut up!

The big question is: If Laura or Jeff come off the block, who will go up as a replacement? Will it be Jordan, Casey or Russell? Has Russell burned enough bridges to become a solid target? Is he setting someone else up? Maybe someone like Lydia? This POV is huge. Personally, I wouldn't mind if noms stay the same and Laura goes home. I just don't like her at all. She's doing nothing for me in terms of game play, entertainment value, or inspiration. If she gallops off into the distance I'll be one happy gal, but since I want her gone so bad she'll probably stay. It happens every season. Whoever I can't stomach stays around for weeks and weeks and continues to torment my precious life. I have one word for you. Keesha.