Hell To The No

Soooo much to talk about today and hardly any of it has to do with Big Brother. I can't not comment on the VMA's last night. OK so how wretched is Kanye West? Seriously, his desperation for attention is nauseating. I'm not a Taylor Swift fan by any means. I don't think I can name a single one of her songs, but the poor girl was mortified last night and Kanye was the big bad wolf. What a complete and utter asshole! I've never liked him, never listened to his music, preferred Carlos Mencia's version of Gold digger, and pretty much think South Park had him nailed. Wasn't he supposed to have undergone some big spiritual awakening after his mother died? Apparently, humiliating a teenage girl in front of millions of people isn't a sin in his own personal religion. What's even more annoying is that he's on the premiere episode of Jay Leno's new show tonight. Everyone and their grandmother is going to tune in to see what the douche bag has to say and it'll get HUGE ratings and Kanye will take all the credit. How annoying! As for Beyonce... total class act. Never liked the bitch, but I adore how she spun it last night. Sure it was probably preplanned and not even her idea, but it was generous and gracious and I hearted her for a little bit last night.

Secondly, cracky Whitney Houston is on Oprah today! The little gay man living inside me is doing backflips right now in excitement. It is going to be off the chain... and I swear to god I've never ever ever used the phrase "off the chain" before in my life. She's going to come clean about her addiction to crack, living in pajamas for 7 months, and the intervention her mother organized. It's going to be dipped in dark chocolate, rolled in macademia nuts and redipped again in liquid diamonds. The only thing that can make it even more perfect is if Kathy Griffin tweets during it. Speaking of tweeting, I will most definitely be tweeting my reactions as it airs. I've noticed several of you have signed on to Twitter to follow me and Mr. O'Shaugnessy. I wholeheartedly thank you and have a piece of advice that will make you all want to send me a fruit basket. Do yourselves a favor and download Tweetdeck. It's a program to use with Twitter and it's pure heaven. I get notified immediately whenever any of my friends tweet or mention me. I can also see whenever anyone anywhere in the world says anything about BB11 and it's all laid out for me in little organized windows. I'm obsessed with my Tweetdeck and this afternoon I'll create a new "oprah" window so I can tweet to other Oprah watchers if I'm so inclined. It's a great way to meet new people, get new followers, and stay up to date on everything. Click here to download and enjoy. It's free. 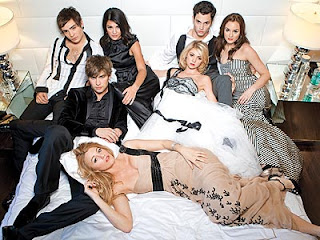 Thirdly, new season of Gossip Girl tonight! MissJavagirl, welcome aboard the GG train. Please tell me you started watching it from the very beginning. Anyone looking for a new show to be obsessed with will benefit greatly from watching Gossip Girl tonight at 9pm on the CW. It's fashionable, scandalous, delicious, hot, evil, wicked and completely addicting. I'm only mad I didn't discover it sooner. It's divinely stylized with an intoxicating soundtrack and clothes that'll make you drool. I think Chuck Bass is my personal hero. Investing in the DVD's is SO worth it. Believe me when I tell you you'll thank me profusely. I've put the DVD's up for sale here on the BBBB over on the right hand side. Click and enjoy! 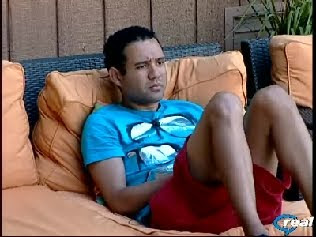 OK so let's talk some Big Brother... once again the bitches slept all day and when they finally awoke all was not necessarily well. Kevin is sitting in the BY alone talking out loud going over who will vote for him to win. He's going through everyone and he comes to the (incorrect) conclusion that he can't win the $500,000 no matter who's he up against. He says, "Pretty much I have no shot against these 2 girls." He still has no idea who he'd take with him to the Final 2 and I really wish I could telepathically tell him to take the Ragamuffin. Taking Natalie is the only clear cut way I can see the Scarfed One declaring victory. I'm not thrilled with idea of the Ragamuffin walking away with $50,000, but I'd rather that outcome instead of Jordan walking away with $500,000. 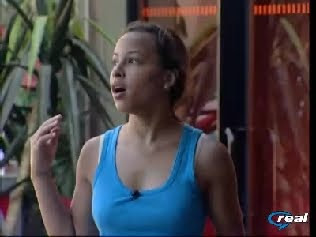 Ragamuffin eventually walks outside and Kevin tells her that he has no way of winning the $500,000 no matter what he does. He thinks he can't even win against Natalie because of Jeff. Kevin says, “I feel like I have zero chance of winning against you.” Ragamuffin, completely pissed off that Kevin is even considering taking Jordan, replies, “Well now you’re playing for second place Kevin. If that’s how you feel then all you can do is deal with it now.” She continues, “You’re completely full of it and talking out of your ass... I’m not going to sit here and try to empathize with you cuz you’re talking out of your ass." 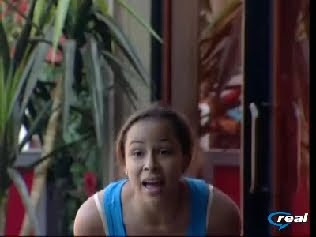 Jordan comes outside, sees they're arguing, and immediately turns around and goes back inside. Kevin just sits there while Ragamuffin continues screaming about he's "trippin'" and needs to take a "trippin' pill". Eventually, she calms down and says she wants to go inside to cook. She walks in and not 30 seconds later BB announces an outdoor lockdown. Kevin starts cracking up and Ragamuffin storms outside furious. She's livid she can't cook up some crazy concoction and she starts screaming again. She says, “When I get this mad I end up going to jail cuz I end up doing something really dumb!” LOL Maybe those rumors about her beating up someone were true after all. Kevin just continues to laugh and Jordan comes waddling out. Ragamuffin is now demanding that Kevin plays pool with her and he says. "HTTN!" For those not in the know, that translates to "Hell To The No" - which is a phrase I think cracky Whitney herself coined during Being Bobby Brown. 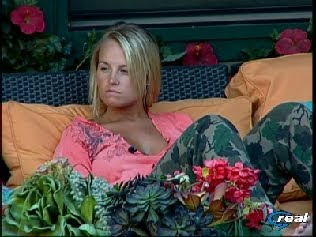 Jordan wants to know why they're mad and Ragamuffin tells her how Kevin doesn't think he can win against either of them. Kevin and Natalie keep bringing up Dan (BB10). Natalie insists he was hated and still won. Kevin thinks everyone kind of liked him because he was a nice guy. Jordan doesn't say a word and she just sits there looking a little mad. Is she mad that Natalie was out there obviously convincing Kevin to take her to the Final 2 or is she mad that her cookie dough is inside while she was outside? I'm not sure. Ragamuffin breaks the contemplative spell and starts shouting for Kevin to come play with her. Again he says, "HTTN" and just ignores her. All the chat hags got pissy because they wondered why Ragamuffin never asked Jordan to go play. Ragamuffin begins to play pool by herself and bitch seriously won't shut up. She has a total gift for running her mouth nonstop. 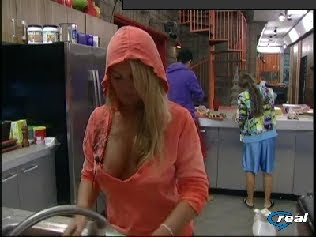 Eventually, they're allowed back inside and Ragamuffin immediately begins to torture an innocent fish. She puts all sorts of spices on it and soy sauce and vanilla and god knows what else. Kevin wants nothing to do with it and Ragamuffin gets mad. Jordan, in the meantime, is washing dishes in the sink with her boob completely hanging out of her shirt. Bitch needs to put a damn bra on. I really wish I could be a fly on the wall in her trailer when she discovers how many naked pictures there are out there of her.
As far as last night's show is concerned... I missed the last half, but it appeared to me that Jeff and Jordan got way more coverage than anyone else. That's really not very fair considering America is still voting. Oh and how funny was it that they didn't even cover Seabiscuit and Beaner Boy? You know Laura was bucking and kicking her hooves like crazy wondering how such a smart beautiful girl like herself could be ignored. Blech! Laura you have only Jeff and Jordan to blame. Their footage was much more important than yours apparently. God forbid we go a day without seeing Jeff water some silly plants with his shirt off.
We learned a little something about Kevin last night as well. Apparently, he had Poland Syndrome when he was a child and he has no pectoral muscles or something like that. He had to undergo surgeries for pectoral implants which is why we rarely ever see him with his shirt off. According to Wikipedia, Poland Syndrome is the underdevelopment or absence of pectoral muscles on one side of the body. Does this make his upper body weaker than normal? If it does then I can't blame him for not hanging on longer in the first HOH comp and in the Graduation Day comp. On the same token, it's even more impressive how long he lasted during Part 1 of the final HOH comp. I love him even more now for not revealing this earlier to garner sympathy or use it as an excuse for his physical shortcomings. Kevin for the win!
Late last night, BB must have made another trip to Michael's because the HG's got even more crafts to play with. Kevin made a BB plate and Jordan painted a mug to celebrate Natalie's engagement. Ragamuffin kept barking at Jordan the whole time telling her what colors to use and how to design it and I just had to wonder why Ragamuffin didn't paint a damn cup of her own.
That's about it kids. As to how I'm voting, I've been voting Kevin, Kevin, Natalie. Jordan winning is a travesty to mankind. I don't care how much she needs the money. Again, BB is NOT a goddamn charity. If she needs money so bad, then maybe she shouldn't have shelled out over $6000 for new tits.
Speaking of charity and worthwhile causes, if you've enjoyed what I've done here this season please click on my Donate button and show me some love. I do not get paid to do this at all. I do it simply because I enjoy it. It takes several hours a day to create this ridiculousness and anything anyone can give is greatly appreciated. It costs a fortune to keep Mr. O'Shaugnessy in whiskey and cabbage. I might be forced to start sending him out as my high class leprechaun manwhore.
What did you guys think of last night's recap show? Have you been voting a lot? Are you ready for this season to end already? Will you be selling all of your Kanye CD's today? Have you set your cell phone to remind you about Oprah like I have? Does Chuck Bass inspire you to wear purple? Take it to the comments bitches and discuss!