Will My Leprechaun Live To See Tomorrow?

Yesterday, the last full day in the house, was filled with some minor excitement and some major disappointment. It's no secret that all I want is for Kevin to win. I don't really care who wins second place. I just want Kevin to win first place. I don't think he was a floater at all. He laid low when it was smart to and he played fierce when his life depended on it. He's been funny, sneaky, manipulating, and smart. Throughout it all he's always played strategic, never letting the personal get in his way. He's likable and he's a good game player. This is something none of the other finalists have. Jordan is simply likable and Natalie is simply a good schemer. Kevin embodies it all. I will be ecstatic if he wins Big Brother 11.

In the house yesterday all was relatively calm until a banner flew over the house. The feeds went down, the rumor mill began churning, and HG's started lying. I didn't see the banner. I don't know what it said. I don't even know if it had anything to do with BB. Secretly, I hoped it said, "Kevin you can beat Natalie in the final!" Kevin says he saw the words "Natalie" and "trust". Natalie says she saw the words "Kevin" and "liar". Jordan was off somewhere eating a tub of Crisco.

Kevin and Ragamuffin have a little spat over who he'd take to the Final 2. Ragamuffin tells Kevin he's dead if he doesn't take her. Kevin says a real friend wouldn't threaten him. Ragamuffin says a real friend wouldn't betray her. Ragamuffin is convinced that if she gets evicted tomorrow night, she'll have time to convince all the jurors that Kevin is the devil. She's fucking delusional. She'll get evicted, have a commercial break to sit down, and then they'll tell her to shut up. She'll try to make Kevin look bad if she gets a chance to ask him a question, but she won't be able to do shit or convince anyone of anything.

A little later Ragamuffin begins cooking up some crazy concoction that was some kind of pasta with dressing. Kevin was scared to eat it and I don't think Jordan touched it. They talk a little pop culture and Kevin tells Jordan she's like the Jessica Simpson of the house. She's blonde, sweet, southern, and pretty (you know he almost said stupid too). He says Jeff was her Nick Lachey and Jordan just laughs. Kevin guarantees her that she probably got a really cute edit and that America will love her. Who the hell does he think he is? Sylvia Browne? They talked a little about the jury and Jordan is convinced she has no way of winning. If Jordan was smart, she'd throw Part 3 today. That way Kevin would take her to the end and she'd get Natalie's vote.

OK here's what I want to happen: I want Jordan to win Part 3 and I want her to take Kevin. This is the only chance I can see of Kevin winning. He'll have Natalie's vote and most of jury save Jeff and Michele. If it comes down America's vote, Jordan will win the whole damn thing and I'll have to curse the country. 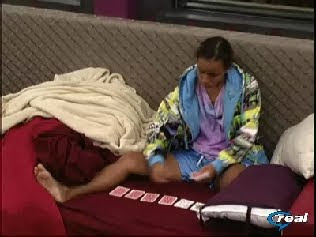 After "dinner", Jordan and Kevin go to lie down and hopefully sleep, but Ragamuffin marches in, plops her ass down, and begins to loudly play solitaire. It's futile for Kevin and Jordan to try to sleep so they wake up and Jordan begins to paint Natalie's toes. 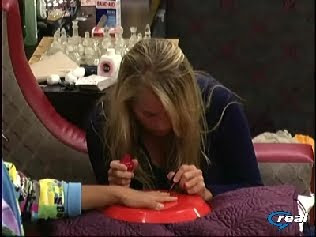 Jordan also begins to paint Natalie's nails and, I must say, Jordan looks right at home. The HG's begin to plan what they'll wear tonight and Ragamuffin is just obnoxious and rude to Kevin telling him he'll look all busted if he wears his yellow plaid shirt. She wants him to wear one of his new outfits, but Kevin claims it makes him look too straight.

Eventually, they all move outside and the Final 2 talk begins. Jordan is, maybe for the first time, keeping me guessing. She tells Ragamuffin she's taking her to the Final 2 and says she already knows what she'll say when she evicts Kevin. Not 5 minutes after, Jordan tells Kevin she's taking him to Final 2 because she doesn't think she can win against Natalie. Kevin said his mind was made up during Pandora's Box and he's definitely taking Jordan. Unfortunately, I believe him. He has beeen practicing speeches against Jordan and he's had about enough of the Ragamuffin at this point. I'm really really nervous about a Kevin/Jordan Final 2. Would Michele really vote for Jordan to win? Would she not vote strategy at all? It would kind of shock me if someone like her voted out of spite. Jeff, Natalie, and Lydia will vote entirely personal and I expect that. Michele is a wild card in my mind. For someone who claims to be so smart, would she really ignore strategy in the final hour?

I have a horrible feeling in the pit of my stomach that Jordan will win Big Brother 11. I've already told Mr. O'Shaugnessy it might be better if he watched the show from his cubby hole tonight rather than from my lap. There's no telling what I'll do if Jordan wins. My collectible figurines are wrapped in bubble wrap and my china cabinet has been moved outside. Jordan winning is a joke... a big fat roley poley fucking joke. *warms up hot poker*

Jordan will win the whole damn thing and Jeff will win America's Favorite and I'll be forced to strangle some puppies and drink their blood. Do you have any idea how annoying the chat hags and Twitter will be if Jeff and Jordan win this shit tonight? OMG... I need some Xanax. There's nothing worse than menopausal smugness. I think I'll have to wear my black veil tonight and bury all the knives in the backyard. I was going to enjoy a bottle of wine tonight, but now I'm having second thoughts. A drunken Lala is a dangerous Lala. I could disembowel my leprechaun and set the neighbors houses on fire and where would that get me? Prison wouldn't suit me at all. They don't have Bravo or opium in prison I don't think. Seriously, you guys, I'm freaking out.

Before I forget, I need to mention Ross Matthews' interview yesterday with Keesha, Danielle, Boogie, and Janelle. Thanks to BB11_Unleashed for the tip. At the beginning of the interview Ross says that Dick was supposed to be there but he backed out. The look on Janelle's face is priceless. Remember when I speculated that Janelle and Dick had fought prior to last week's show? Well, it looks like my prophetic powers were right on the money. Ross mentions Dick's name and Janelle sneered like you wouldn't believe. It was filmed right after that live show last week and I'm now 100% certain that something went down between them. I should totally start giving psychic readings from now on.

Believe it or not, there is actually a silver lining to what could be a complete travesty tonight. I don't want to talk about it too much or I'll jinx it, but something could happen tonight that will cause me to dance naked to sweet sounds of Michael Bolton on the bagpipes even if Jordan wins. If it doesn't happen I'll have to dissect my leprechaun and send his body parts to various HG's, but let's think positive shall we?

I now open up the discussion to all of my superbly fabulous readers. Do you think Kevin has a shot of winning against Jordan? Who do you think Jordan will take to the Final 2? How do you think Michele will vote in a Jordan/Kevin Final 2?

Tomorrow I will indeed be posting my thoughts about tonight's show. I will also be announcing the winner of the Big Bitchy Contest. If you've enjoyed what I've done here this season, please feel free to click on my donate button and show me some love. Thank you so much for all of your support all season. It's been a blast and I look forward to doing it all again for BB 12.