Happy Finale Day bitches! It's been 10 weeks in the making and it all comes down to tonight. Personally, I think BB11 has been a great season. I can honestly say I've enjoyed it much more than BB10. The scandal, the drama, the fights, the scheming, the lies, the tears, the sex, the stupidity, the crazy... it all tickled my no-no and made me feel delicious all over. I don't watch BB for the friendships or the tanning. I watch BB to see how far people will go to win some money. The more outrageous and creative the game play, the higher my enjoyment factor. Let's take a look back at some of my most favorite moments. 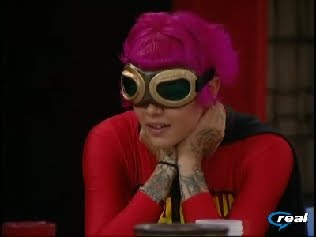 While "You got got!" and "You're a terrorist!" were definitely noteworthy, I think I have to say my most favorite fight of the season has to be Lydia all aboard the train to Crazy Town. It was also my most controversial post of the season. I praised Lydia for unleashing on Michele and calling her out in front of everyone. Lydia went batshit crazy dumping out Michele's beer, she slurred her words when confronted about being drunk, and she vowed to turn the house upside down if she was kept in the game. Lydia was always such a good time for me. It was poetry when she shouted to Michele, "Bipolar psycho bitch get your straitjacket and your padded room!” That's a quote that dreams are made of. Fairies come out of their hidden shelters and flutter around majestically when such divine insults are thrown. Lydia didn't stop there though, "Fake blue contact wearing ugly motherfucking tranny bitch!" Oh Emm Geee, it's heaven dipped in ice cream is what it is. She ended her divine soliloquoy with ""Fluck you Russhhell! I'm not slerrrrring my worbs!" Good times. Such good times. The house was never the same when Lydia left. Lydia did crazy with style like none other.

What was your favorite fight? 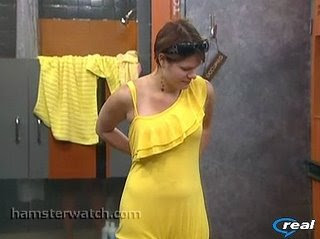 (Image via Hamsterwatch... this was before I got bbreloader and did my own screenshots)
This cast was absolutely delightful in their outfits. We had Lydia's silver space pants, Natalie's apron dress, Laura's red Hookers At The Point dress, Kevin's pedal pushers, Ronnie's dorky shirts, Russell's fedoras, Jeff's Let's Dance t-shirt, Jordan's booty shorts, but my favorite outfit of all time has to be Michele's Canary Yellow Dress. When she wore it magical things happened. I might have to fight for it if she puts it up on eBay. LOL. Totally kidding. That thing probably stinks of ass and B.O..
What was your Favorite Ensemble?
Favorite Jason Bourne Moment: 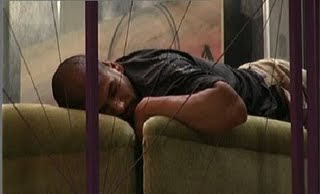 I remember this day like it was yesterday. I was on my treadmill and I had set up my laptop so I could still watch the feeds while I worked out. Ronnie had been shunned from society and had taken to hiding out in the HOH room. All of a sudden Russell runs up the stairs to have a secret meeting with Ronnie. I leapt off my treadmill, while it was still running mind you, and ran to my computer. Russell making an alliance with Ronnie was indeed shocking, but what followed afterwards had us all giggling. Russ was trapped in the HOH and couldn't find a safe route back downstairs. He got on his belly and hid waiting for his chance to escape. That chance never came and he had to pretend he had fallen asleep while waiting outside the HOH to taunt Ronnie some more. 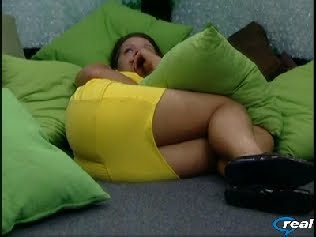 Michele takes this one by a landslide. It even beat Jessie's widows I think. Lydia had a few breakdowns as did Ronnie, but none can touch Michele in her yellow dress in the Green Room talking to herself and switching personalities. Actually now that I think about it, I'm thinking the breakdown where Michele kept staring at me might be better. 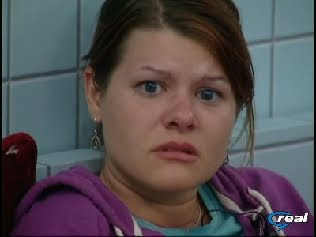 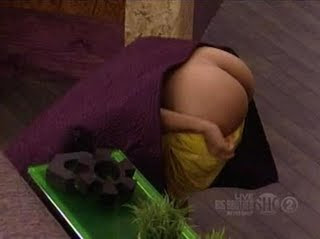 (Image via BigBrotherLeak)
There were many all around funny moments in the house. Launch night beauty pageant, Michele talking about loving to lick ass, Lydia and Jessie in their sex forts, Jordan shaving her legs with a garden hose, Lydia painting Jessie's toes while he slept, Natalie drunk and yelling at everyone, the puke fest Graduation Day HOH comp, but one of my favorites was Truth Or Dare. When Natalie dared Kevin to cuddle Jessie while he slept I was in hysterics. She marched right in and put Kevin's arm across Jessie and Jessie awoke all pissy and angry.
What was your Favorite Good Time Moment? 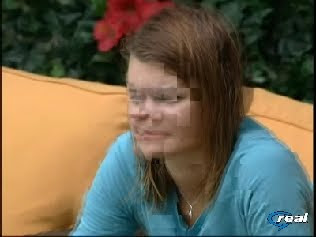 It was divine providence that delivered this precious gem. It's 100% untouched by human hands and, yet, it speaks volumes.

So what were some of your favorite moments of the season?