Urine In a Snake Carcass 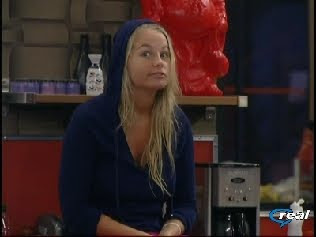 Happy Sunday bitches! 2 days to go and it's all over. Well, not exactly. Even though BB will be over, the fun will still continue here... for a little while at least. I've been sitting on a certain announcement, but I figure now is as good a time as any to reveal it. I have secured an interview with a past HG and I can guarantee that it will be funny, shocking, and interesting all at the same time. I've already spoken to this person on the phone and not only is this person a fan of the blog, but they're very forthcoming and honest. You won't want to miss it. Who knows? Maybe it will lead to some other interviews as well (I'm dying to talk to Lydia - if anyone reading this knows her, tell her I found her to be immensely entertaining and rooted for her since Day 1.). Also, if any of the HG's make videos, pop up in the news, or do something stupid it'll be covered here as well. Keep checking back or follow me on Twitter so you don't miss a thing.

Lots of interesting comments in yesterday's post. Thank you everyone for sharing your 9/11 stories. It was so interesting reading how different generations and various locations reacted to the tragedy. I love hearing from new people who've been reading all along, but have never commented before. It tickles my no-no in much the same way that Mr. O'Shaugnessy is right now. A note to Aslan: I could be standing next to you at Le Grand Appetit or sipping margaritas at Rio Grande and you'd never know. ;)

Once again, not much happened yesterday in the house and I was much too busy getting my KICK ASS NEW PHONE to watch all these bitches sleep all day. Never go to the Verizon store on a Saturday by the way. The store was packed and the guy who was helping me had the softest voice and I had to keep saying, rather obnoxiously, "What?!? What did you say?!?" Funniest part of my experience was that they were playing Man V. Wild in the store. I was waiting for them to transfer all the contacts from my old phone to my new phone so I was sitting down watching the giant TV. Bear Grylles had gutted a snake and filled it with his own urine to drink later. I must have had quite a look on my face because a Verizon lady started pointing at me and laughing hysterically. Bitch. Who wouldn't be horrified by a crazy British man holding a snake carcass over his head emptying out his own urine into his mouth? I almost started gagging. The lady next to me covered her face while her boyfriend turned the other direction. A good time was had by all.

OK so in the house they slept all day again. When they finally woke up and started talking Ragmuffin began to discuss how she wants to get married immediately. Kevin tells her that's silly and that being engaged is the best part. He says if she rushes it people will think she's pregnant. Ragamuffin hints that she wants CBS to pay for her wedding and Jordan chimes in and says, "Yeah! Like Trista and Ryan!" They begin to talk about The Bachelor and Jordan thought the one who was a doctor was "fine". Jordan brings up Melissa Rycroft and how she did Dancing With The Stars after she got dumped last season. She tells the others that she'd love to do DWTS and Kevin tells her to tell someone she wants to do it. He thinks they'd totally let her be on the show. Jordan then says she'd never do it and that she's too embarrassed to dance in front of other people. WTF. Then why did she just say she wants to do DWTS if she has no intention of dancing in front of an audience? I will kick puppies if this bitch wins this show. Seriously, you don't want to see what the tantrum I will throw. I've already begun wrapping my fragile valuables in bubble wrap.

They all remark about how the house is like a ghost town now. Ragamuffin says that she doesn't miss having to do Diary Room sessions. Jordan and Kevin both say that they loved going to the DR and being able to say what's on their mind. 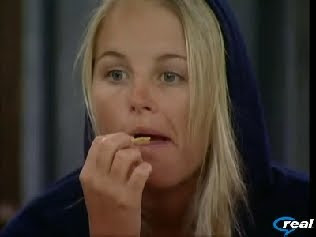 Conversation turns to past HG's and Jordan says how she didn't like Braden or Laura at all in the beginning. She says she liked Kevin because he was funny. She was intimidated by Casey and she thought Natalie would be young and sweet. She thought Chima was funny but had the potential to have a major attitude. Lydia totally stood out to her and she never really noticed Jeff at all. Michele or Ronnie didn't stand out to her either. Jordan tells Kevin she liked him immediately because he was gay. The gay men in her salon are funny so she automatically assumed that Kevin would be funny too. Kevin just laughs and chalks it up to southern ignorance.

It turns out that Jordan has never enjoyed Cup O'Noodles before entering the house. She thinks they're magically delicious and remarks that she'll definitely buy them when she gets back home. Kevin tells her how cheap they are and how college students live off of them. Ragamuffin says, "Yeah... that's what you live on!" Uh oh... the moment passed and no one caught Ragmuffin's little age faux pas. Jordan just keeps on talking about how she thought it was weird how healthy everyone was and how they all took vitamins. Well Mashed Potato Maisy, not everyone thinks cotton candy and marshmallows are food groups. I'm a total vitamin junky btw. I blame my mother and Suzanne Sommers. My mom was reading Suzanne's book about menopause or some shit like that and she freaked me out telling me how many diseases I could get if I don't take my vitamins. Now I order vitamins nonstop from Puritan's Pride and read by the neon light of my pee when the power goes out. Turns out Suzanne Sommers was on to something cuz I feel and look great and my mood has improved. Now I only give 5 people a day the finger instead of 10. Yay vitamins! 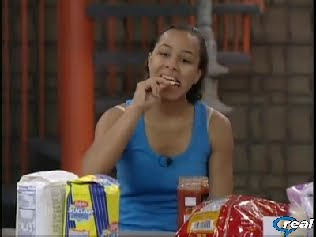 Ragamuffin asks Kevin if she can wear her blue hoody. Kevin tells her no and she snarls and growls saying that she doesn't know why she has to ask him whether or not she can wear her own hoody. It's not her hoody and I'm going to be livid if she gets it. Kevin better seriously hide that shit from her when he does his final packing because I would not put it past her to totally steal it.

They all talk about how they're worried about their jobs when they leave the house... Kevin, especially. When he left his assistant took over his work and now he's worried that she'll have infiltrated her way into his job and completely taken over. By now she's probably gotten the hang of it and she's cheaper to employ so Kevin is a little bit concerned. Ragamuffin says that Blockbuster may not exist anymore so she might not have a job either. Jordan doesn't really care either way. Her job sucked before she went into the house and will still suck when she gets out of the house.

Then they talk about all things pop culture and Kevin confesses to loving New York from I Love New York. He says he can't help but cry from laughing so hard whenever he watches her show. Jordan says BB should have a spin off like VH-1 did with Charm School and Real Chance Of Love. They should compete for money or love or something. Natalie says she'd do it in a heartbeat. She'd even do another season of BB in a heartbeat. Kevin says he'd do another season, but he'd want a year break first. Jordan doesn't know if she'd do another season. The game was a lot harder than she thought and it's been really stressful for her. Kevin chimes in saying he thought it would be a little more relaxing and not constant stress all the time.

Convo turns to game play and they recap the Braden fight. Ragamuffin says she feels bad she said shit about Jordan behind her back, but she didn't really know her at all. Now that she knows her she thinks she's sweet. Bitch please. She's just kissing up to get taken to the Final 2. Kevin says he never really got to know Jordan either until Jeff left. Jordan says "Really?" They say yeah she was always around Jeff and they never got to know who she was as an individual.

Kevin confesses he never thought he'd bond with Lydia. He toally thought he and Chima would be "ghetto sisters". He had seen Chima in casting and took the IQ test at the same time she did. He says she was dressed in head to toe pink and didn't have her weave on. I would pay money to see a picture of that. He says she had a doo rag on her head and looked ghetto fabulous. Once in the house when Lydia told him she was bisexual and began to talk about all things pop culture he knew immediately they'd be besties. Jordan says how one night when she was sleeping Lydia was rubbing her arm. Jordan didn't tell her to stop because it felt so good. LOL Then Jordan confesses to making out with girls in clubs for various contests while drunk. Had Jordan made out with Lydia, I might have liked her some more.
Late last night during BBAD, BB kept focusing on various different design elements around the house especially the bikes and light bulbs in the green room. What was the point of those stupid bikes anyways? Hardly anyone rode them. The camera conitnued to focus on the different recycled bottles, plants, fruit, cameras, couches, everything. I don't know if it was a bored camera operator of if they were trying to give us a hint that the Final HOH component would be about counting. The damn conspiracy theorists have rubbed off on me and now I'm looking for meaning in every little thing.
OK I'm gonna end this here. Remember to keep voting for the BBTop50.
Let's do something different today. How about you guys tell me who you want to win BB11 in the comments. I'm interested to see who you guys are rooting for. Don't worry... if you're rooting for Jordan I'll try not to make fun of you too much.