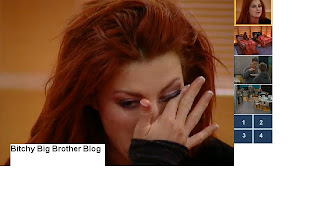 Hey Y'all. What's UP in the hizzie? I'm SO psyched to be like writing this BLOG today. SEriously, I literally like said to myself, "Colette LALA you get to write a blog. Aren't YOU so psyched?" Then I said to myself, "YES I'm psyched. OBVI!!!" It's like I'm RUMpleSTILtskin and let my hair down and you all climbed UP inside and was like "Hells yeah, THIS is awesome!" and I was like "Don't be MESSING up my weave and all that!" Heheheheheeeeeeee Oh my god, I'm soooooo funny! It's so AMAZING that you guys like show up every day. I'm like SO blessed. All my homies be bitches wit the itches. Get some on ointment on that shit y'all. LULZ But seriously, it's like I have a super fun time when I get to RITE about all these bitches yo. Girls be crying and boys be sighing. The roof, the roof, the roof is on fiyah! Majorly totes the place to be. It's so CRAAAAAAZY that's this is the place to BE. :) Thanks AMerica. It's SO good that you like push buttons and like whack whack whack whack tada! POW! I'm here at COlette Lala's super cool blog. Wooooooow.
*gun shot sounds in the distance*
*thud*
Ok, she's dead. Let's recap, shall we? 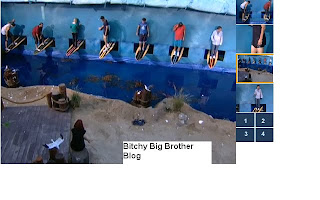 Monet is gone, no one shed a tear (except Monet), and I sat at home mumbling chants to myself that the HOH comp goes my way. I built an altar and mixed some rosemary, garlic, and olive oil together. That's either the secret potion for Brendon losing or my recipe for an Italian salmon rub. I'm not sure, but I do know that only good things happen when those ingredients are mixed together so I crossed my fingers and hoped for the best. It took about 15 minutes for the Feeds to return and when they did we discovered what we had known all along. Kathy Faye couldn't find a way to take a nap on her surfboard so the bitch is already out (thanks Angela). In addition, Lane, the silent killer who probably throws everything, is also out. Word of advice: if ever Kathy goes a day without her mascara and 18 naps and Lane says more than 100 words, you know the apocalypse is near and you should seek shelter. 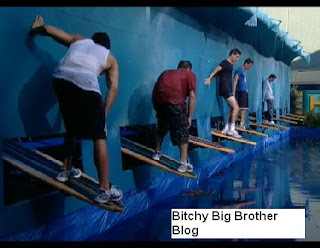 On the sidelines of the comp, Dragon Lady looks for her smokes, Lane shrugs his shoulders, and Hyena Fuckface has now put on a cheerleading costume. Her cries are shrill and I broke my headphones hurling them against a wall. "Go Brendon! You can do it! Wooooohoooo! You got this!!! I'm here for you! You're doing SO awesome!!! Keep going. OMG You're the best!!!" I put a call in to my local gun shop, taped my headphones back together, and returned to the Feeds to find that not only has Kristen dropped, but so has Hayden. What in the sam hell is going on here?!

*It's at this point that I encounter my car drama. Twitter and Facebook followers know what I'm talking about. I arrive back home and I'm furious.* 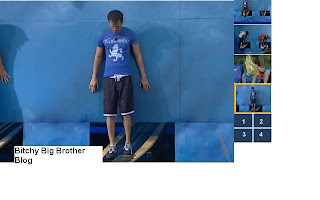 Not long after that Britney falls, then Enzo - making Enzo the first Have-Not. The dipshits left on the surfboards focus and concentrate on the task at hand while Ragan seizes his opportunity to reprimand every bully in school who has ever fucked with him. Shut up Ragan. Last time I checked there wasn't a soapbox permanently attached to your feet. Britney interrupts him up by telling him his tip is slippery or something. Rachel begins to talk louder than Britney and shouts, "Oh my god Ragan! You look sooooo hot! All the boys at home are thinking how sexy you are!!!" Shut up. You stupid cunt. 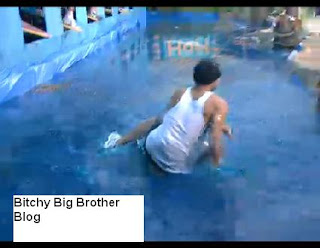 Eventually, Bitch Boy Brendon falls and, let's face it, that's all I really cared about. It shuts Rachel up and the two begin to pout together. 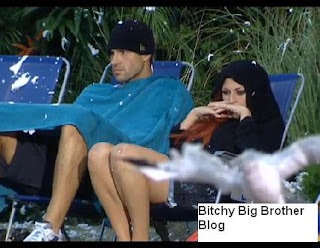 Looking at them all sad and forlorn I began to get a tingle in my tummy. It was a tingle of happiness and hope. I felt my soul come alive again. I knew at that moment that fairies existed. One fluttered prettily and landed on the top right corner of my laptop. I gazed at her thinking how lovely she was. She had teeny tiny princess shoes and a garland of delicate lilies in her hair. She blew me kisses as her wings fluttered. I smiled and thought... "Life is good. I don't have to hate anymore." I named my fairy princess Arabella. She liked that name and patted my hand with her little itsy bitsy fingers. It was precious and priceless. I wanted to stay like that forever. 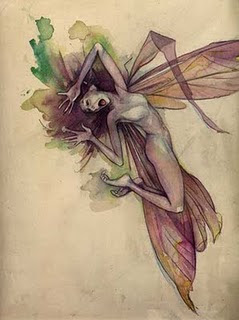 Then... I raised my palm as if to pet sweet Arabella and brought my hand down lightening quick smashing her into a pink gooey sticky mess. *sighs* I'm sorry. Rachel started talking to Brendon about how she told Chenbot love only comes once in a lifetime and I reacted on instinct. I will miss Arabella. She will always be a reminder to me of what could have been. Mostly because, I can't seem to get remnants of her little fairy skin out of the crevices of the keyboard. My 'K' button is all sparkly now. 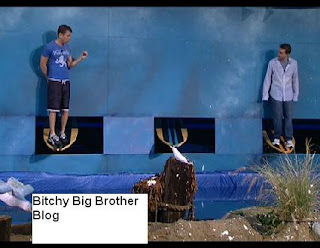 Ok so eventually, we're left with just Ragan and Matt. The two immediately begin to scheme with Ragan telling Matt he wants him to be HOH. They talk about possibilities for nominations and, it turns out, Matt is hell bent on getting Kathy out of the house. He'll put up either Kathy or Rachel or Kathy and Brendon. It doesn't really matter. He just wants Kathy out. Ragan moans a bit about not wanting to look like an asshole to Rachel, but basically he's on board with getting the Dragon Lady out as well. Ragan suggests they bring certain people out to talk about nominations and I'm just thinking to myself "Why?". Why does every damn thing have to be workshopped and mulled over? Ragan would probably prefer to make sculptures of his feelings and write letters to dead relatives explaining the ins and outs of why and how he does what he does. Well, I'm sick of it! I'm sick of everything being a potential seminar for learning and understanding. Ragan's got that disease Rupert had last season on Survivor. Talk, explain, feel, open up, understand... What Ragan needs is a good Buddhist monastery experience where talking is forbidden and silence is golden. I'm on the phone to Tibet as we speak. I'll even pay for it. Anything to get him to shut the hell up. 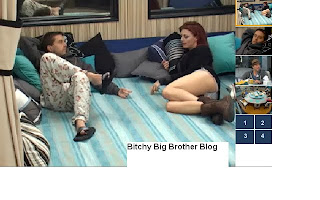 Matt pretty much tells Rachel point blank that everyone in the house wants her and her pussy boyfriend gone. Rachel is stunned. She's flabergasted. How in the world could anyone want the most perfect couple in the world out of the house?! I'll tell you how Rachel. When I walk by a pet store and see precious puppies in the window, I think of your face and I very systematically crush everyone one those puppies' skulls in with my bare hands. If I see a baby on it's daddy's shoulders and I hear your voice in my head, I grab the baby and smash it on the ground. You make me want to do vile and horrible things Rachel. I'm sitting here with no toenails, one eye, half my hair yanked out, and Satanic symbols carved into my skin. When you speak, I want to die. It's as simple as that. Your voice, your laugh, your tears make the world not want to turn anymore. It's permanently noon here now because of you. It's hotter than fuck outside, my car is being a total bitch, and I FUCKING HATE YOU!!!!!!!!

Great, now I'm crying. God, she makes me so angry. I now know how women snap and kill their husbands or abandon their children. They heard Rachel speak. Susan Smith, Pamela Smart, Aileen Wuornos, Elizabeth Bathory, Lizzie Borden... they were normal well-adjusted women who just happened to bump into Rachel Reilly on the street. They got one whiff of her and went on to commit horribly heinous crimes. Lawyers will start to use the Rachel Reilly defense in court. If the bitch doth shrill, then the women must kill
Matt and Rachel continue their little convo. Matt is trying to talk game, but Rachel keeps steering the conversation back to her and Brendon. Matt is literally telling her how she can stay in the game if she agrees to send Kathy home and Rachel is interrupting saying moronic things like, "People really want me and my man to leave? Whyyyyy?"

After her meeting with Matt, Rachel shuffles into where Kristen is lying down. She's crying and saying she refuses to kiss Matt's ass which is such a total lie because she just got done telling him how great he is and how happy she is for him. Anyhow, the HG's get a liquor delivery and Rachel wants her red wine. Oh, did I forgot to mention that just minutes before she was saying "I can't eat. I can't drink. I think I'm getting an ulcer. Me, me, me, I, I, I..."? Even though her love is paralyzing her ability to eat and drink, bitch wants to get drunk, only... wait for it... BB won't let her! LOL It's so perfect, it's divine. BB needs to do a DR with Rachel and they know when she gets going on that red wine that she's more insufferable than usual so they tell her she can't drink and this makes her cry... more. Alright, to be fair, I'd probably cry too if someone told me I couldn't drink. Then again, I'm not an asshole like Rachel so it's perfectly ok for me to sob and weep, but it's not ok for Rachel.

Later on Matt gets his HOH and I missed it cuz I was busy having nightmares about red headed crazy women trying to kill me. Please visit onlinebigbrother.com for photos of the event.

I'm gonna end this here. Again, my apologies for phoning it in. I'm going through some stuff right now that's unfortunately affecting my blogging. I assure you it's almost done with and hopefully *fingers crossed* all will be back to normal here shortly.
So, are you happy Matt won HOH? Do you think Matt is telling the truth about wanting Kathy out? What violent crimes has Rachel made you commit? Are Hayden and Kristen going to start backing away from Brenchel? Will Kathy regret her moronic vote last night? Comment it out bitches and have a great day!
Posted by Colette Lala at 7:54 AM