Why Were There TWO Darrens? 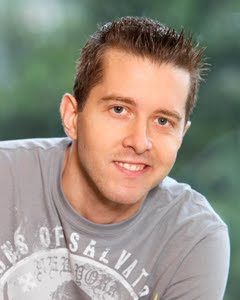 Once upon a time there was a house full of strangers. One night after farting and eating fish sticks, they all reached under their beds, drank a concoction that came out of Rachel's hoo ha, and then died. Blissfully and peacefully the house was quiet. Feedsters paused for a mo, looked at one another, sighed, and then... CELEBRATE GOOD TIMES C'MON!!! Kool and the Gang burst through the doors, disco balls appeared out of nowhere, and at home we all stood in front of our laptops and danced to the infectious groove. Somewhere in the world Annie was laughing and saying "I told you so". BB12 bloggers decided to blog about Bewitched reruns instead (That Endora can be such a bitch!) Seriously, you guys, I can't take it anymore! Nothing ever happens in this house. I'd rather watch Paradise Hotel (come on, how great is that show?) to analyze game play than this sorry sack of idiots. *sigh*

I'll keep blogging. Don't start freaking out. I'm not quitting or anything. I'm just saying it's extremely difficult to write about a day where, literally, next to nothing happens. Last season, by this time, we'd already had the Beaner fight, scheming went on DAY AND NIGHT, Ronnie was runnning from group to group, My Friend Flicka was eating her oats and neighing trying to stay in the house, and I'd barely leave my spot to even get a potty break. I want that back! I want the delight, the excitement, the wonder. I want to bite my fists and say "Oh noooo she di-in't!". I want to be able to sit through an entire BBAD without either falling asleep or throwing shoes at the television. Alright, let's recap... I guess. 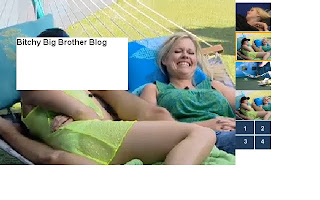 The HG's awake and Kathy Faye begins her daily workout. She walks outside to the couch, lights her cigarette, and she's done. It's amazing she barely even breaks a sweat. While sitting outside and aging herself about 15 years, Andrew comes out and does his "version" of a workout. He gets on the Elliptical and does things like move his arms and legs. Kathy Faye doesn't get it. I mean, seriously, why go through all the trouble? With nicotine oozing through her veins, Kathy tells Andrew that it's not fair for him to go on the block and that she and Kristen will do whatever they have to to keep him off. She tells him he has a lot more friends than he thinks and then she passes out with a lit cigarette in her yap.

Here's what bugs me about this: Why can't Andrew fight for himself? He's a grown man, a father, a doctor, yet he's got these blonde bimbesses having hour upon hour of conversations about him like he's a special needs case and has to have someone chop up his food for him. They say "Oh Andrew is so awkward", "He just doesn't know how to communicate.", "It's really not fair they pick on him." - if that doesn't sound like a Special Olympics participant than I don't know what does. Why all the coddling and pity? Let Andrew fight his own damn battles.
The POV Ceremony comes and goes and I guess whatever Kathy and was doing was working because Matt went up on the block instead. I'm really meh on Matt. I don't think he's cute, I have yet to see Mensa potential, he doesn't make me laugh, and he's not hating on anyone yet. I need hate. I need these bitches to actually feel an emotion other than "glad". Hey, I think I've just pinpointed what's missing in this house. Sure, Britney and Monet can bitch, but 2 out of 12 isn't nearly enough to get this party started. Everyone needs to stop being so fucking happy to be there and start aiming for the jugular.

So, the Plastics hear the POV news and how do you think they respond? They decide to nitpick and talk about all the STD's flying out of Rachel's vag. Yes, it's funny, but why isn't Monet fighting to stay? I'd rather watch Monet going person to person and making a case for herself. Calling Rachel a busted up hag isn't going to keep anyone in the house - no matter how much I agree with the assessment. When Annie went up on the block she cried for a little bit, threw a tantrum, then bitch got to work! For 4 days she didn't stop trying to save herself. I can respect that. I look back on it fondly. I kick holes in my walls wondering why the hell it didn't work!

What else, what else? Oh! Ummm I think Hyena Fuckface and Bitch Boy From Hell are getting closer to doing the nasty. They were well on their way to making something happen when BB actually came on the speaker and summoned Rachel to the DR. Come on, Big Brother! Get with the program! Rachel looks like a squealer and I'm almost positive Bitch Boy will cry afterwards. He's probably a cuddler too. Ewww. I'm more of a "Don't touch me", "Get the fuck out!" kind of gal. Last thing I want to do is talk about your stinky feelings or, worse yet, let you spend the night. No thanks! "Hit it and quit it" - tattooed on my ass.

This brings us to the late afternoon. Everyone is puttering about doing this and that. It's like an old folks home kind of. The house should really be called "Shady Pines". Sometimes they sit in the sun. Other times they eat soft easily digestible food, and, once in a while, they even get gassy. Yesterday was one of those whiles. Enzo was farting left and right and saying it smelled like wet puppies or some shit like that. I think Enzo's farts probably smell like Ass Licker's breath - hot, pungent, and will melt your face if you let it.

Later on Hyena Fuckface begins to talk about what she wants to do when she leaves Big Brother. If I had things my way, she'd leave within the next 5 minutes, but unfortunately I'm predicting she might stick around for another week or two. Oh my god... what if she stays for like another 4 weeks? Oh nooooo! Seriously, I don't know what I would do. I might have to find a bridge to leap off of or have my ear drums surgically removed. All I know is, if you think I'm bitchy now... just you wait and see exactly how evil I can get if Hyena Fuckface sticks around. Shit! Anyhow, I think her post BB plans were to hit the beach and get sushi. I think she even invited Kathy to stay out in California with her and Bitch Boy. Can you imagine touring L.A. with Hyena Fuckface? OMG I'd push her off the Universal trolley right into Jaws' mouth. Sure, it's a mechanical shark, but if I prayed hard enough, maybe an electrocution type thing would happen and the shark would malfunction and her boobs would get caught in all the it's wires. A girl can dream, can't she? 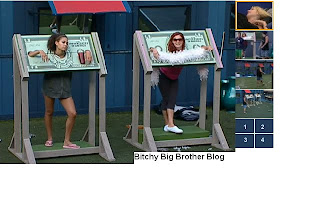 Then the assholes got stuck in the stocks again. I'm not sure how this works and it's really sad that I don't bother to look it up and find out. All I know is Hyena Fuckface's stockade is missing a very large ball gag. Everytime she's in that thing it's chat time! She never stops running her mouth for the entire hour... and this is where I begin to wonder if Bitch Boy is an amazing actor or just really really stupid. How, I repeat, HOW, can he stand to be around her? Either he's playacting the whole thing in an effort to be the next Jeff or he's a tremendous idiot. I'm thinking there's no in between. I refuse to believe that anyone on the planet would willingly spend time with this woman.

While the bitches were being punished, the couch crew got busy talking about all the money they'll make after the show is over. Ok, this really bugs me. Shouldn't they be focusing on the game and not eBay? Besides, no one really pays big bucks for any of their shit anyways. Didn't Ass Licker's yellow dress sell for like $33? What these assholes in the house need to remember is that you must be somewhat likable for people to want to buy your stuff. And, it's week 2 for crying out loud! Live in the now, not the later.
This brings us to BBAD. Ohhh the angry tweets I saw. I'm not kidding when I say people are pissed off at this season. Personally, I'm hoping the HG's are all just slow starters and eventually the fights and nonsense will begin. I mean, they have to. I will will it into fruition. I will go to my potion cabinet and mix up something super powerful. I refuse to listen to Enzo talk about his Slop Pastina for another minute. I want late night naked orgies with everyone making out in the pool. To this day, that night is still the best night in BB history. It was one of my least favorite casts, but those bitches knew how to party. Sure, half of them are in jail now, but who cares?! I was about done with them anyways.

Alright, that's all I got for today. So, do you want Matt or Monet to stay? Will Hyena Fuckface and Bitch Boy ever seal the deal? How long until Kathy Faye gets one of those throat box thingies like that old lady in Beetlejuice? Do you have faith this season will get better? Comment it out bitches and have a great day!
Posted by Colette Lala at 8:26 AM