Expect The Unexpected - OH SHUT UP! 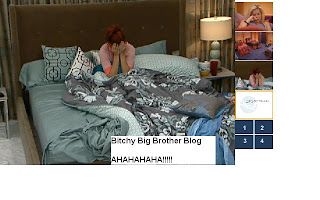 Back in the olden timey days if a woman repeated herself over and over again, gallavanted in the open air, and muttered nonsensical phrases, I'm quite sure they'd cut out her tongue and send her to a sanitarium of some sort. There she would be free to apply and reapply mascara all day long. She could fingerpaint, maybe make some friends with the terminally comotose (because, seriously, let's face it, those are the only type of people who'd be able to tolerate her), and putter around all day in shoes without strings. I'd like to bring back this long lost tradition of willy nilly locking up women that the powers that be deemed unfit for society. I hereby name myself one of those "powers that be" and my first order of business is to commit Rachel to an indeterminate period of time in a padded cell. Let's recap, shall we?

There's lots to cover so let's jump right into the POV competition and end at our gloriously disturbing denouement that will surely haunt our souls for years to come. The POV competition was one where the HG's had to hang onto something and try to determine when one hour had passed. Whoever was closest to the hour without going over was the winner. As it turns out, our own little Mistress Of The Dark Bitchney ends up winning. She dropped at around 52 minutes with Enzo dropping at 1 Hour and 14 seconds. 14 seconds! That's a phrase we'll be hearing until the end of time. Trust me. 14 seconds! Enzo swears there's no way he waited longer than 8 minutes to drop after Bitchney and some of the HG's, the ones who lost, begin to suspect if maybe Big Brother fudged the numbers and rigged it so Bitchney would win. Who the fuck cares? Bitchney won POV, thank god, and we get at least one more week of her threatening to kill people. I, for one, am thrilled.

I didn't care for Britney earlier and I thought she was catty and judgmental, but, at this point in time, all I want to see in the BB12 house is anything and everything happen that will make Rachel and Bitch Boy's life a living hell. It is my distinct opinion that these two assholes are completely ruining the house, the game, and my sanity. I want them split up and I want it to happen sooner rather than later. Again, I must warn that anyone who wanted Annie out last week might be infected with a dangerous parasite like in The Matrix. Of course, you could also just be an idiot, but I'm willing to give you the benefit of the doubt here. Please seek medical attention as soon as possible and get that thing distorting your ability to reason and use logic sucked out of your bellybutton ASAP. Ok? Thanks. With the competition over Monet cries and probably barfs up her lunch while Matt is up in the HOH reprimanding the players for not dropping immediately after Bitchney did. Rachel and Brendon look at each other realizing that maybe they should have put some more thought both into their nominations and how they were going to compete. After a minute of super hard thinking, Bitch Boy shivers and declares, "Monet is going home no matter what." Oh, is she Bitch Boy? Well, last I checked you're were not the HOH. Your flighty giggly excuse for a girlfriend was in charge and assuring all of us that you had no say in her reign.

The conversation turns to what will happen next week during the HOH competition. Ragan is still convinced it'll be Endurance. Rachel declares that there's no way Britney will win it. Both Ragan and Hayden are quick to tell Rachel that small girls always do well in Endurance comps. Apparently, Chelsia even told Matt in his pre-interview that it was good he was so small. Big meaty asshats never win Endurance comps. Rachel is dismayed to hear this news and decides herself that Britney still won't win. Rachel literally thinks she's got this whole game figured out when, in fact, she's ignoring what she needs to focus on and focussing on the minutiae that doesn't even really matter. She even says that if Britney wins next week she'll be fine, because Britney hates Andrew more and he'll be her target. The whole HOH room laughs at Rachel and informs her that no, Britney won't be after Andrew, she'll be after RACHEL for nominating her in the first place. Rachel cocks her head to the side and says, "Really?".

Ragan begins to steer the conversation to who the replacement nominee should be. He says it should be someone who's a pawn, someone they're not necessarily super tight with, and someone they could make a deal with. He's basically telling Brenchel to put up either Matt or Lane. I don't mind Ragan, but I'm getting really sick of him always helping out and being the voice of reason. Later on in the night, he'll just about infuriate me. If I had things my way, I'd get Kathy's ass up on the block. She's useless and lazy. Remember how last year I made a little challenge for myself to always snap a pic of Jordan eating? Well, this year I've decided the challenge will be to capture a photo of Kathy always laying down. I'm thinking I'll be super awesome at it. For example: 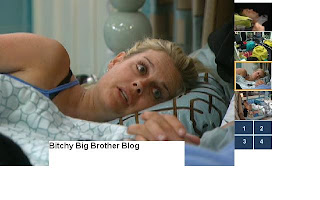 I gotta be honest. I'm having a really hard time typing this today. I got 3 hours of sleep and I can hardly keep my eyes open. I'm just going to jump ahead to the crap that went down last night and hopefully get myself a nap before the drama starts up again. My apologies, but that BBAD last night completely traumatized me.

OK so at some point Matt actually offers to go up as the pawn. He thinks it'll throw off people into not knowing that Badda-bing exists. I don't understand the logic. I no longer trust him since he was so convinced Britney was Mr. Salvatore and I could really care less if he goes home any time soon. He does nothing for me.

Well, as soon as Rachel hears that Matt has volunteered himself she immediately assumes he's up to something. She says, "Who the fuck volunteers to go up on the block?" She second guesses herself and, for some reason, decides that putting up Andrew instead is the better idea because at some point in time Andrew may or may not have criticized her. Now, you and I both know that if Andrew goes up on the block, there's a really good chance he's going home which is why I AM LOVING this plan. All I care about at this point is keeping as many people in the house as possible who'll go after Brenchel and break them up. Monet is on that list of people and so, for this week, I'm her biggest cheerleader.

This brings us to BBAD. It started with a lovers quarrel. Bitch Boy accidentally told Andrew he was going on the block when Rachel distinctly told him to keep it a secret. I almost sympathize with Bitch Boy for a millisecond because for the previous hour Rachel had been nagging and whining and complaining about Bitch Boy not being her everything in life. In reality, Bitch Boy just wanted to work out and maybe catch a catnap. All this game stuff is annoying him. He thought games were supposed to be fun. Pretty princess Bitch Boy doesn't like that all Rachel wants to do is talk strategy. Like a snotty teenager he keeps sighing and asking Rachel if they're "done now". It's pretty gross. Both of them are assholes and both of them are wrong. Here's why:

Bitch Boy is in Big Brother. He should suck it up, realize it's not Camp Thunderbird or the Paradise Island Atlantis and develop some sort of game play instead of being all pissy that he can't do his jazzercise. On the other hand, Rachel needs to calm the fuck down, stop obesssing over every little thing, and , for chrissake, stop being such an obnoxious nag. Why Brendon puts up with her shit is beyond me. If any chick ever nagged me like that, I'd grab my keys, call her fat, and march my ass right out the door. Rachel is beyond incessant. She takes incessant to a new level that incessant itself has never even reached before... repeating herself over and over again about things that happened in the past and can't even be fixed now. She's just arguing to argue and it's driving me insane. Rachel is the worst person on the planet and, for this, she must die. 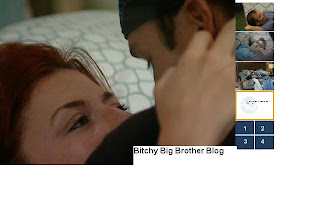 Bitch Boy actually manages to walk out of the room leaving Rachel alone with her big fat phony crocodile tears only to return 5 minutes later with his dick tucked up in his asshole like Buffalo Bill in Silence Of The Lambs. He's on his knees, apologizing, begging forgiveness, and even sniffling along with Rachel. They tell each other they have "forever" and I promptly stuck one of those shish kabob things into my temporal lobe. It doesn't hurt that much. I promise. The image on the screen hurts much more. Trust me. The numbness on the left side of my face is almost a relief at this point.


After they kiss and make up, Rachel starts getting into the red wine and then she starts to talk... and talk... and talk... and talk. She's in the BY surrounded by Kristen, Ragan, and I forget who else. It was a mummified corpse so it's not like it matters. Anyhow, Rachel is very concerned with "expect the unexpected". She's so concerned with it, in fact, that she's making sure she says it a million times. She also reminds her fellow HG's that they're on "re-a-li-ty television." I'm sure they were thankful for the reminder because it's not like the microphones and cameras everywhere were clues or anything.
So she's standing there with her feather boa, red wine dribbling out the corners of her mouth, her goblet clinging and clanging here and there, and she's stumbling around saying, "Like we're on re-a-li-ty tv right now. Expect the unexpected. Do you know how like blessed we are to be here? Like *burp* I never imagined myself here. Expect the unexpected.... do you even know what that means? It's like amazing. It's like reality tv. I mean, we are on television. If we don't expect the unexpected then like why are we here? That's what Big Brother is.... expect the unexpected. Like, we are in the Big Brother house. Oh my god.... expect the *belch* unexpected or else you're going home. They can watch us right now. People out there *pauses and points to the sky* are watching us right now. I don't think they expect the unexpected, but it's a good thing we do or else why are we here? Reality television is sooooo weird. We're like characters yet we're not. We're acting, but we're expecting the unexpected which is soooo much better than not expecting the unexpected. You know what I mean?"

*** Ummm hi, this is Colette Lala's personal assistant typing now. I regret to inform you that Colette has taken it upon herself to insert every shish kabob thing she could find into her head and now she looks like this:

I have to find a way to get her into the car and to the hospital without scratching the leather upholstery. She's mumbling something about bitches, giggles, and being sorry. I think she's saying, "Comment it out bitches and have a great day!"
Posted by Colette Lala at 9:48 AM