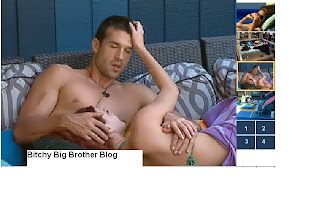 The Showmance. I never really quite hated it so much as I do now. The cooing, the canoodling, the tiny whispers in the night that make me reach for the barf bag I saved from that flight to Nepal that we just won't talk about. Now, don't get me wrong, I like when people slut around and then give each other dirty looks the next day. Hell, that's my entire relationship history in a nutshell. What I don't care for though are the sly looks out of a corner of an eye to check that the cameras are picking up every hug, every tear, every whisper, every ass grab. And when the couple is comprised of a hyena and a testosterone-lacking doofus, why, I get suicidal. I almost took my own life yesterday by plunging shish kabob thing-a-ma-jigs into my gorgeous mug. Sure, I'm a little swollen and stuff is oozing out of my cheeks, but it was worth it dammit. It was worth it!

I've gotta be honest, I slept half the day yesterday. The doctor, Murray I think his name was, insisted propofol was completely normal for a shish kabob trauma so I went with it. It turns out I didn't miss too much as far as the BB house is concerned. Tweets were scarce. Hyena and Doofus made out. Kathy slumbered and I think Bitchney poked the eyes out of some innocent squirrels. Just your average BB12 day really.

There was one little nugget I found interesting: Rachel/Hyena/Giggles divulged that she'd love to be a sexy science host of a tv show. Does this sound like anyone else we know? As much as I loathe Rachel and wish she'd get a bad case of Mange, I still hate Ass Licker more. So... if there were to ever be a battle of the Science Nitwits, I'm rooting for Rachel. Let's face it, Ass Licker's face looks like a foot, the word "charisma" doesn't compute, her boobs are now growing on top of each other, and her awkwardness sends television viewers into a rage... kinda like that episode of Charmed when the Demon of Illusion made all the moviegoers really pissed off and want to kill each other. That's Ass Licker!

We learned that the POV Ceremony will take place today and then people tanned. Bo-ring!

BBAD started with Ragan telling us about his poetry slams. Poetry slams are basically places that really angry people who can't sing like to hang out. Their cadence and meter is all wonky and I'm quite sure they're all mad at "The Man". Although, when I think of "poetry slam", I think of taking one of those gigantic heavy poetry college textbooks and then slamming it right into Ass Licker's face. It might improve her nose. I'd be doing a public service really. Oh, but enough about Ass Licker, she'll be appearing at the BN soon enough. It's something you won't want to miss.... trust me!

Moving on... Kathy goes from one lying position to another and she's got Britney on the brain. Apparently, Britney came up to her when she was "fixing" to do laundry and was all like, "Why are you different to me now?" Kathy said, "I'm not different. I'm fixing to do laundry." Britney said, "You're different." Kathy said, "Well, I'm standing up. That's different." No, Kathy Faye, that's not what's different. Don't you remember how way back when last week you were the one reclining with Britney making fun of everyone? Don't act like you're all innocent now chicken fried steak. You, my dear, were the ring leader for the Plastics. You'd get them all into a frenzy and then after 45 cigarettes you'd pass out and pretend you knew nothing about nothing. God, I hate you. You are the most useless HG ever to grace the BB house. All you do is lay around, sigh, and mumble how you never have time for things. What in the sam hell are you talking about you don't have time for things? Do you have important meetings, shopping to do, meth houses to break into? You. Have. NOTHING. To. Do. Your job for the next 8 weeks is to play Big Brother. That's it. Play the goddamn game or get the fuck out. Seriously, I have no patience for people like you. Please quit. I beg you. Just quit. You can go home and sleep and add to your mascara collection or something. Look, I'm on my knees with my oozy face begging you to quit this game. 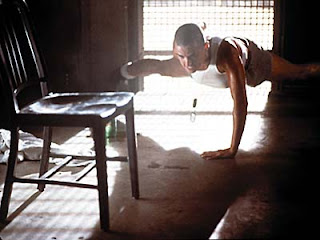 Damn I'm angry today, aren't I? There's a reason actually. I'm about to start a sort of "Hell Week" if you will. No, I'm not pledging a frat, but I might be trying out for the Navy Seals like Demi Moore did in G.I. Jane. I'll never tell. The point I'm trying to make, without getting too personal, is that this week is going to suck my luscious ass. It's the culmination of a very long and trying 2010 and it's all going down in a matter of days. I will TRY my very best to blog when I can, but I might have to miss a day or two this week. I know, I know, you're all crying already. Believe me, I'm crying too. I've never in my life missed a BB blog and it's not like I'm looking forward to this or anything. So, they may be short and quick until Saturday, but then I'll make it up to you guys I SWEAR. I've got a big juicy BB11 bombshell as well as a Survivor Nicaragua surprise so stick with me, you won't regret it. If you don't stick with me, I'll hunt you down and give you a wedgie or something.

Alright so Kathy is bitching to Kristen about Britney and they both decide that's it's completely unfair if Andrew gets backdoored this week. I disagree. It's the nature of the game. Besides, I need more Rachel enemies in the house for the time being. Kathy threatens to be on the "warpath" if Andrew leaves. Oh really, Kathy? What will you do? Roll over? Give up one of your blankets or pillows? Shut up you worthless idiot.

This brings me to Kristen. We all know I like her, but I'm having sort of an inner struggle with who she's aligning with and choosing to give tongue too. Krayden, Haysten, whatever awful name you bitches have decided for the infant Showmance #2 will not be tolerated here. If Hayden and Kristen develop into something, you will kindly refer to them as "HelmetShifter". Thank you.

And to all you bitches asking for my leprechaun, he's in Thailand at the moment procuring some "product" *wink wink*. He'll be back in the States either by this weekend or early next week. Patience. I miss the little guy too. I've had no one but my face to take my anger out on. Mr. O will get what he's been missing when he returns. You can count on that.

New readers must be totally confused. Mr. O'Shaugnessy is my leprechaun and he "does things" for me. He's not really a BB fan, but he tolerates it. He drinks a lot, packs my opium pipes, and worships Olivia Newton-John. He likes to give blog readers prizes with his ass on them (although I have no idea why) and he even has his own Twitter account ( http://twitter.com/mr_oshaugnessy). I know, I know, he's so arrogant.

Oh shit.... I'm wathcing BBAD on DVR right now and Rachel just burst into the HOH clutching a bottle of red wine screaming "Who waaaants some Merlot?!?" Ok. That's it. I'm out. I can't right now. I just can't. All I hope is that someone peed in that bottle.

Alright bitches, I'm really sorry for how short this is. Seriously, it's killing me, but this bitch has some asses to kick and life to grab by the balls. In the meantime, please check onlinebigbrother.com to fill in any gaps I missed. So, what do you guys think of Kathy? Do you change the feed when Rachel appears just like I do? Do you still like Kristen? Will you support HelmetShifter if it happens? Comment it out bitches and have a great day!
Posted by Colette Lala at 8:53 AM