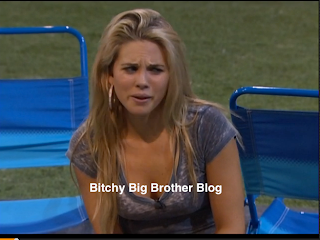 There is a movement underfoot. Can you feel the rumbling? Can you feel the stampede of angry feed watchers marching on Washington, marching to Burbank? Enraged picketers with their placards shouting and stomping in frustration...
Boycott CBS!
Sign my petition!
Remove these Houseguests from the house IMMEDIATELY!!!
CBS supports White Power!
If you watch CBS, you're a White Supremacist!
Get your free CBS swag... a cloak and a hood!
Helter Skelter is alive and well and living in Studio City, my friends. The race war between the blacks and whites is imminent. It is too late for drones, too late for chemical warfare. The only solution is to remove these Houseguests forthwith, tar and feather Robyn Kass and start all over again. Let's recap, shall we?

My, my, my... what a weekend! But before we get to all that, allow me a teeny tiny moment to gloat. Check it out, bitches! 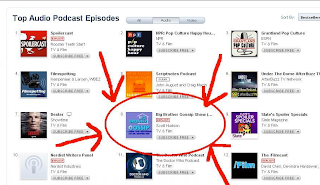 If my co-hosts and I can pull this off when we're drunk, imagine what we could do if we were sober!

But let us get to the task at hand. Typically, we hear about The Aryan Brotherhood on MSNBC at 1am in the morning while watching reruns of Lockup and wondering to ourselves if Maricopa County Jail is the worst prison in the country. It turns out it isn't the worst in the U.S. and Sheriff Joe Arpaio is simply doing his best to run a crackerjack little facility. The worst of the worst is our very own Big Brother house and, I gotta tell ya, I love it! 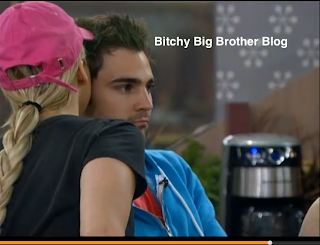 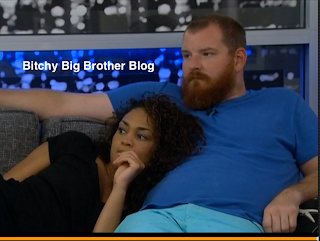 I love when Ginamarie whispers to all the boys about her N-word insurance plan. My loins quiver when David calls Candice "Black Candice" (not to be confused with Black Patsy from Dance Moms) and then giggles to himself, "That was totally racist, dude." And when Candice lies on Spencer's spare tire and he asks, "Are you gonna git mah shirt all greezzy?", my nipples get hard and I start to touch myself.

This is the good stuff, folks. These people are the dregs of society and they are on display for the entire world to point and laugh at. Watching the ignorance unfold, gain traction, acquire new members and multiply is not only fascinating sociologically, but it makes me feel pretty damn awesome about myself. I look at the uneducated heathens on my screen and I feel 20 ft tall. When an adorable blonde named Aryan, who once set the boys tongues wagging with her shorty shorts and bikini shots, wishes Helen would just shut the hell up and go make her some rice, I am once again the prettiest girl in the room.

Half of the Big Brother 15 cast are skidmarks on society and I couldn't be more ecstatic about it. What do I tell you guys season after season? What do I bitch and moan about year after year? What do I claw and pine for and write blog after blog about? Other than "gin and glitter", what is my second most often used catchphrase? ENTERTAIN ME!!! I cry it from the rooftops. I punch it angrily into my Twitter. And so now that these vile displays of hatred are actually entertaining me, you expect me to be mad about it? Hell no! Give me more! Lay it on me, Aryan. Hey David, what do you think of Jews? Spencer, aren't those Latinos stealing all of our jobs? Ginamarie, Muslims. Go!

And if you think people are sitting at home offended by this bullshit you're kidding yourselves. No African American is staring into his computer watching all of this and whimpering to himself. If anything, the Houseguests behavior is doing America a favor. By pulling this nonsensical hatred out from behind the curtains and putting it on display for everyone to see, we are no longer ignoring a problem that indeed exists. In my personal life, I rarely encounter these sort of attitudes on an everyday basis. I don't live in the south - where I think these opinions tend to be more prevalent. My friends aren't bigots. My family is educated and cultured. These displays of racism and homophobia are happily something I don't ever have to deal with... until now.

Until right this very moment am I jolted awake from my strange utopia and confronted with the horrifying reality that people really think some pretty horrible stuff. I mean, wow! As a viewer I watch this and think to myself, "These people are AWFUL!" But I don't want it to suddenly stop in week one. Good god, no! I want this to continue. I want us to write about it, document it, react to it. And then in September when these public enemies emerge from the house, I want them to see and read and know everything we've been saying about them all summer long. I want them to get online and be disgusted by their behavior and embarrassed by how they've humiliated themselves and their families. What better lesson is there than to smack all of their viciousness right back into their faces and say, "Look! Look what a horrible person you are! Look at how you've offended a nation! Look!" Sweeping it under the rug and handing out warnings accomplishes nothing. It lets these assholes off the hook unscathed (because, let's face it, by September it could all be forgotten) and fancy free.