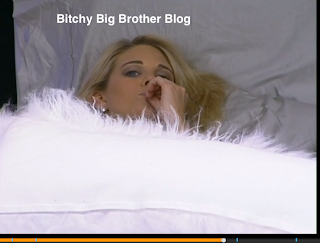 Life as a blonde woman is chock full of problems. I should know. I am one of this often looked over minority. While we may look like Nordic princesses on the outside with our light eyes and fair skin, no one knows the true pain of our daily lives, the pain that follows you the world over. Walking down the street in Madrid, Spaniards point and shout "Rubia! Rubia!" In Rome, men flock to me in circles three deep begging to buy me a gelato. Gelato isn't on my diet! Even here, in my own country, no one can understand the heartache that comes with getting self-tanner on your cream colored bathmats. And the extra expenditures that I have to endure on a monthly basis... I'm sure one of those welfare inner city people could totally never afford it. Root touch-up's, eyebrow pencils and sunscreen aren't handed out by the government you know. So while some not-blonde women are getting free cheese every week, I have to waste 30 minutes at the M.A.C. counter arguing with Tatiana over whether "Fling" or "Lingering" is the better color brow definer for me. Tatiana is such a bitch, I'll have you know. And while summer is inherently my season and I may look at home lying by the pool in my bikini, I am constantly at war with myself. What if I freckle? What if my scalp burns? I want to go swimming, but the chlorine... the chlorine! *weeps* Green pool hair is a flaxen girl's shame to wear three months out of the year. If only people took the time to understand our daily struggles, they might not be so quick to judge and shout slurs like "Barbie!" when we walk by. Let's recap, shall we?

Wednesday is usually my day off, but a conversation went down yesterday that I feel is important to touch on. It is the conversation that everyone has been waiting for. The fans have addressed it, CBS has addressed it, but the Houseguests themselves haven't addressed it... until now. 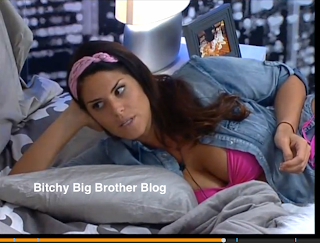 After weeks of racial slurs, awkward jokes and general all-around horrible behavior, Amanda has taken it upon herself to confront Aryan on the things that she has been saying in the house. Amanda didn't have to do it. No one told her to do it. And nothing yesterday precipitated it. She was very non-confrontational and approached it as a friend giving another friend advice. In the house, the two aren't besties, but they're trying to work together in a foursome alliance that includes, Asshat (Jeremy), Aryan, McCrae and Amanda.

When approaching a friend about delicate matters like bad breath, body odor, how fat they look in those capris or the extremely inappropriate racial slurs they've been spewing, it is important to be gentle and nonabrasive. Amanda did just that. Let's face it, it's not easy for anyone to say to someone else, "Hey bitch, you left your Klan hood on my bed last night." It is an incredibly awkward situation for everyone involved, but Amanda is worried that the comments could affect both her and her alliance's safety in the house. 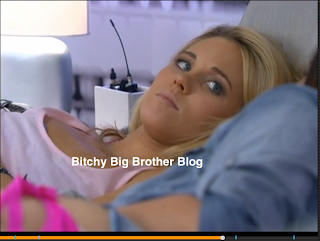 Amanda: "I want to tell you something that might upset you a little bit. I want to tell you so that you're mindful of it."
*pause*
Amanda: "I think you're joking every time there's any sort of like racial thing comes out of your mouth. Like, I do the same thing. But I think it's, I think the people who are a different race are taking it offensively. Like there was a conversation downstairs with like Howard, Candice and umm Helen and... who else was down there? There was a couple other people down there. There was some fish comment made and I don't think you meant it racist at all, but I don't think they know that. I don't think they know you're joking. So umm, just like, and that's what I said downstairs too, 'I think she was just joking.' You know what I mean? I don't think it was malicious."
Aryan: "The fish..." *scoffs*
Amanda: "People look for any sort of excuse to villainize you. Just like, just like, be careful."
Aryan: "Who was down there though?"
Amanda: "I don't know. I like walked in on that conversation. And this is not to like start shit. If you make comments like that, just be mindful that they're not taking it as a joke."
Aryan: "I don't even know what I said that they would think that."
Amanda: "I don't know. I wasn't even here when you said it, but you made some sort of segregated comment about the fish up here or something that like..."
Aryan: "Well, they are."
Amanda: "Yeah but like you said the black fish should get at the bottom where they belong or something like that."
Aryan: "No, that's not what I said. I said the black fish stay on the bottom because they're camouflaged on the bottom and that's where they hand out the welfare checks and the white fish stay higher because there's light and it's closer to God."
Amanda: "Just be mindful of it."
Aryan: "Who started that conversation?"
Amanda: "I don't know. It doesn't matter who started it. I just want you to know and be more mindful of it. I know you're not a racist person. This is just from a friend to a friend."
Aryan: "That is the most annoying obnoxious thing I've ever heard. There's nothing I can do about it. I don't feel like I need to pull someone up here to say something."
Amanda: "Just be mindful of it. Candice was saying it had malicious intent."
Aryan: "Candice is the one starting it! And when you said you never heard of the phrase 'Jewed over' that immediately put it in my head so now I'm saying it all the time. That's your fault!"
Amanda: "Uh huh."
Aryan: "When you're blonde and blue eyes, people will make a big deal out of everything. Candice is obviously insecure."
*Aryan stretches*
Aryan: "I just woke up. I don't want to talk about this anymore. There's nothing I can do anyways until I get back home and am able to burn crosses in peace. God, this is so annoying!"

Maybe I paraphrased some parts, but that is pretty much the gist of it. Bravo to Amanda for trying. I'm not sure I would have had the balls to say something.

But the real kicker of it all of this is that while Amanda was trying to warn her friend from becoming a target, her so-called friend and alliance mate is now using it against her saying that Amanda is starting shit. Rumors began to fly through the house about a "Minority Alliance" which Aryan then blamed all on Amanda. Even Howard is angry about it.

Aryan is a selfish little pig who takes any form of constructive criticism as a personal attack. I'd like to send her a message though. The only message that someone like her can understand. I want to make Amanda MVP this week after Elvira (Elissa) leaves. Lord knows, the girl deserves it. She went into the danger zone and emerged alive. She's in big trouble though next week and it would be pretty shitty for her to get booted out after she put herself out on the line like that. Let's make it happen, bitches!

So, what did you think of the conversation? Have you ever met anyone as selfish as Aryan? If I started a "Save The Blondes" fund, would you donate to it? Comment it out bitches and have a great day!