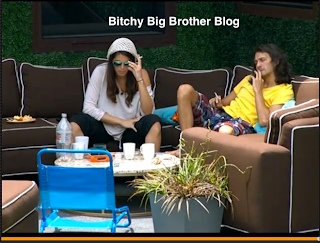 Firstly, welcome Canada! We wanted you rubbing noses and asses with us from the very beginning. But today, with my maple syrup nipples, I can officially welcome you back to the Big Brother family. That's right bitches, your prayers have been answered. Canada, you can get your Live Feeds now!

And believe me, if there is any season that you want the Live Feeds for, it is this season. It is almost annoyingly great. I say "annoying" because yours truly can never seem to take a day off! My alcohol intake has slowed to nil, my bathtub full of gin has things growing in it and I haven't watched Bravo in like 4 days. Once again, on my planned day off, the house flies into a tailspin so profound that it could change the entire direction of the season.

Here is where we left off - The Moving Company seemed all but unbreakable. Douche after douche after douche crossed their hearts and hoped to die, stick a needle in their eye. Meanwhile, Amanda has been trying to finagle a way to keep Elvira (Elissa) and send a blow to what she suspected was a men's alliance. Spencer and Howard got themselves all worked up over Amanda's efforts and put her on the top of their target list for next week. McCrae reassured the MC that even though Amanda was doing her own thing, McCrae was still onboard to evict Elvira. So, no matter how hard Amanda worked or how many votes for Elvira she managed to get, Elvira was still going home because of McCrae's loyalty to the MC.

And then we saw last night's episode of Big Brother on CBS. As someone who has her eye on the house 18 hours of the day, I am rarely surprised by anything CBS has to show me. Until last night. Last night we were privy to a chink in the MC armor. It appears that the other members of the MC (save Spencer) aren't exactly thrilled with the idea of Asshat (Jeremy) bossing them around and giving them orders. Whatever Asshat says, goes, making the other members of the MC resentful. It was an interesting edit that is clearly laying down the foundation for the MC to crumble... perhaps tonight.

For all of you CBS-only viewers out there, here is another thing you should know - Elvira is rarely on the live feeds. So while she may have dominated last night's episode, I've seen her exactly once this week when she almost took a dump on the Have-Not floor. Overall, she is an incredibly boring houseguest. I rarely get to write about her because she is simply never around.

BUT, and this is a big but, I loathe Jeremy and his meaty cohorts so goddamn much that all week I've been struggling over whether or not I want Elvira to stay in the game. Yesterday, I wanted her gone. Today, I want her to stay. I've weighed the pros and cons over and over again and it all comes down to longevity for me. You see, I like Amanda and McCrae. I like them a lot and there is no way in hell I want Amanda in danger next week. In order for her to be safe, I'm going to need Elvira to stick around a little longer. Losing Nick really isn't going to bother me or impact anyone other than VaGina (Ginamarie) which, let's face it, will be AWESOME. Nick is another one of those Houseguests that you rarely see. He sleeps a lot and seems to be playing by the Dan Gheesling principle of being invisible. I hate that!

The Pros to keeping Elvira are as follows:
1) Asshat will throw an enormous hissy fit.
2) Spencer will tinkle in his pants.
3) VaGina will lose her ever-loving mind.
4) Eyebrows (Kaitlin) will probably cry.
5) Amanda will be much safer.
6) McCrae will have finally left that godawful alliance.
7) The MC's dreams of being the most famous alliance in BB history are CRUSHED.

The Cons to keeping Elvira are as follows:
1) THE MVP IS SO UNFAIR!!!
2) The Brenchel army.
3) Hnmm Mnmm
4) People like Candice and Helen could stay in the game longer than they should.
5) McCrae becomes the number one target of the remaining MC's.

So, if I add all of this up - and even though I HATE the idea of Elvira winning MVP every week - I think I would like Nick to get evicted tonight. If I think long term... if I propel myself forward to August and imagine a house filled with douches slapping each other on the backs... if I picture that nightmare, I have no choice but to, reluctantly, hope Elvira is safe.

Now, some of you might be saying to yourselves, "But Lala, McCrae will never leave the MC!" Yesterday, I would have agreed with you. Today, not so much. You see, it looks like the young curly fop might be officially jumping ship. Amanda spent the day rustling up votes for Elvira and uncovering dirt on the men's alliance. She was also called into the Diary Room repeatedly which makes me think that the DR was telling her not to give up. And after what I saw last night on CBS, I have a sneaking suspicion that the DR may be gently nudging McCrae out of the MC. I loathe DR interference as much as the next person, but I also really really really want to see Asshat go insane. It's Sophie's Choice! The inner conflict, morality at war with instinct, teeter totter, this way or that, the angel and the devil... oh god, it's delicious. 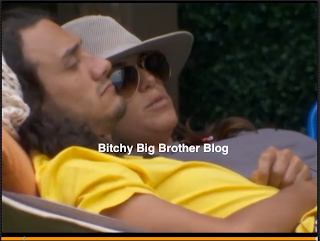 And so, in summation, as of right now there are 5 votes to evict Elvira (Asshat, Spencer, Howard, Eyebrows, VaGina) and there are 5 votes to evict Nick (Amanda, Candice, J-U-DD, Andy, Jessie). The lone undecided vote is McRae. Will he stay loyal to the MC and eventually lose the game to a jerk like Asshat or Spencer? Or will he leave the MC for good and join his woman in an all out war against the men? I don't know! No one knows! And, don't you love it?! I can't ever remember going into a live eviction show where I was absolutely clueless.

So, what do you think McRae will do? Will he grow a sack and leave the MC? Would you rather see Elvira or Nick evicted? Does the inner turmoil tickle your nether regions? Comment it out bitches and have a great day!