Good morning my lovelies! I'm in a good mood today... not sure why. Could it be because I'm going to treat myself to a kick ass new phone today? There's no one I love getting gifts for more than myself. ;) Knowing BB is coming to an end is a bittersweet feeling I need to come to terms with every year. On the one hand, I'm very glad to not have to sit here and watch my computer all the time. On the other hand, I'll have to find a whole new set of people to make fun of now. It takes a few days to adjust back into my normal routine which is why every year after BB I run for the hills. Literally, I get the hell out of Dodge and have some quality "me" time. The trip is all planned. I leave next Friday. Instead of looking forward to my little vacay, I'm actually fretting over when is the best time to post my Survivor Premiere recap over on the Bitchy Survivor Blog. Survivor is only once a week... how will I make sure all you bitches will keep coming back and not forget about me? Oh, but I won't think about that today. "I'll think about that tomorrow." (Tell me where that quote comes from and you're a winner!)


The house is super laid back now as you can imagine and the HG's literally slept all day. BB isn't really even bothering to wake them up anymore. When they do finally get up Kevin asks America to vote for him. Ragamuffin immediately bitches about how they won't be eligible for the "Juror's Prize". Kevin corrects her and tells her that everyone is eligible, but that it doesn't matter because Jeff will win anyways. Ragamuffin says, "You never know." Bitch you have no chance in hell at winning. My money is on Jeff or Jordan to win America's Favorite. Kevin says Jeff never even really played the game and that he should thank Jordan for winning the Coup D'Etat. Kevin thinks the pairing of Jeff and Jordan is what made Jeff so popular. He's not too far off the mark actually. Had Jeff been tight with, let's say, Lydia, America probably would not have voted for Jeff to get the Wizard Power.


Kevin says he's really conscious about everything he says now knowing that America has begun voting for their winner. Ragamuffin thinks people already know who they're voting for and that what happens now makes no difference. Kevin disagrees and cites Keesha as his example. He said how the last episode aired of Keesha was when she was betrayed. She got a good edit and America voted for her. I can't disagree with that. I found Keesha to be insufferable. I couldn't stand that screechy crazy bitch. I never could figure out how in the hell she won America's Favorite.


Kevin makes his way outside and he and Jordan begin talking about what they're supposed to do with their time now. Jordan asks BB if they can go on a field trip. Kevin says even a "ghetto field trip" would be fine. Jordan agrees and says a ride in a car would be sufficient (of course she didn't use the word "sufficient"). They both think a ride in a car around the CBS lot would be very cool. 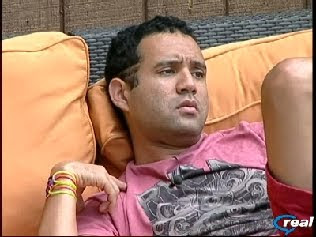 Not long after, Ragamuffin comes outside. She animalistically chomps her cereal and kills all the fun. Jordan goes inside and Kevin and Ragamuffin begin to recap the game and the plays people made. They keep bringing up Chima and how Ragamuffin thinks she was done wrong. Kevin is saying that is was actually smart that Michele nominated Chima. He says that Michele got suspicious of them all because Jessie's girls were acting like someone died when he left. He says, "Michele was smart. She smelled blood and was like 'Bye Chima'" Ragamuffin gets quiet and refuses to comment.

They talk about how they couldn't believe Michele got the fact/fiction question wrong that said that Lydia and Jessie weren't talking in the jury house. Apparently, Michele thought that comp was geared towards Natalie to win since it was about Natalie's friends. Ragamuffin scoffs and says that's ridiculous. She wasn't friends with Casey and they asked about him. Kevin says, "You know how BB makes you suspicious of everything." 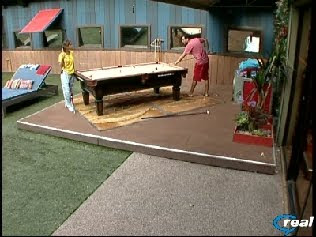 Kevin and Ragamuffin begin to play pool. They talk about their favorite comps and they agree that they both liked the Otev comp. Not long after Ragamuffin tells Kevin he'll be the biggest douchebag to America if he doesn't take her to Final 2. She tells him there's no way he'll win unless he takes her. Kevin doesn't comment and changes the subject to Russell. He says he always thought Russell and Natalie had a secret thing going on. He asks Ragamuffin about her conversations with him and Ragamuffin says she can't remember any conversations with him at all. Kevin is kind of quizzing Ragamuffin about things she's done in the house and it's a quiz she's not doing well at. Kevin says, "So you swear you had nothing with him?" Ragamuffin says, "I swear!" Kevin asks, "Then why did you cry when he left?" Ragamuffin says she started to feel bad about the things she did. Yeah right.

Kevin says he's dying to figure out all the secrets in the game and Ragamuffin says she's doubting everything about Kevin. She begins to give him a guilt trip about how she threw the HOH comp. He tells her he's done way much more for her than Jessie ever did. He brings up Pandora's Box and how Ragamuffin swore on everything she was telling the truth. Kevin thought it was weird that Julie didn't really ask her about it and how Ragamuffin brought up the proposal on her own. He's still suspicious about it all since they didn't bother to make it a huge part of the show on Thursday. He thought for sure Julie would ask specifically about the proposal and she didn't. Ragamuffin tells him Julie didn't even ask her about it in their private interview and she begins to whine again about how Kevin should give her his Japanese hoody. He still says no way.

The rest of the afternoon was pretty low key. At night they got a bunch of games like croquet, dominoes, crafty things, etc. Ragamuffin made them all dinner and Kevin was scared he'd get salmonella from it. Ragamuffin is on this new cooking kick where she wants to try to cook something new every night. Kevin tells her to cook fish tomorrow and then he says he'll make Hamburger Helper for himself. LOL

All 3 remaining HG's begin to discuss 9/11 and where they were when the planes hit. Jordan says that she was in school and someone came into her classroom to tell her teacher what happened (it's like that scene in Mermaids when Winona Ryder's teacher hears about when Kennedy was shot). The teacher told the class and Jordan put her head down on her desk and fell asleep. Yes, go back and reread that sentence. Jordan goes on to say that she didn't even know what the Twin Towers were and thought it wasn't a big deal at all. Kevin is mildly horrified. You can tell by the look on his face. Ragamuffin says she was in elementary school at the time. At least she got that lie correct.

8 years ago Jordan was 14 or 15, right? This is what bugs me. How could a 15 year old not grasp the severity of 9/11? Even little kids knew that something was amiss when that went down. Children are very peceptive when something isn't exactly right. I remember when Reagan was shot and being told to say a prayer for him. I didn't understand what was going on, but I knew it was serious. As far as 9/11 goes, I remember I was at my parents house when it happened. I was actually watching Good Morning America and I saw the 2nd plane hit. When we heard there were more planes unaccounted for and that some might be headed to DC, my mom became very worried for my little brothers and sisters. Their high school was right next to the CIA and she wanted them to come home. ALL the schools in the area let out early and I remember looking out the window and seeing all the roads packed with cars. Everyone was coming home from work and school. The country completely stopped that day. Maybe one of my readers can tell me if it was different in a small town. My experience was that everything paused. Is that just because I'm near Washington DC?

Anyhow, Jordan asks Kevin what happened with the planes and Ragamuffin says there were bombs on the planes. Kevin says, "There weren't no bombs girl! They crashed into buildings!" Ragamuffin refuses to believe it and Kevin goes on to explain how the terrorists took over the cockpit. He tells the two idiots how before 9/11 the cockpit wasn't locked and airport security was completely different than what it is now. He says little kids used to be able to tour the cockpit and go see the pilots.

Jordan then says her boobs feel weird and she asks Kevin to touch them. Ragamuffin says, "Have you ever touched a boob before?" He says no and Jordan says they don't feel right and she wants to get them fixed. Jordan talks about how she loves to watch the food channel and I think to myself she just makes it way too easy. Bitch doesn't cook. Why in the hell is she watching Rachel Ray? Wait. Don't answer that. I know why she's watching. I just lost my head there for a second.

Well, I'm going to end this here because I've got a new phone to go buy and I'm too antsy to ramble anymore.

Oh CBS has posted the application for BB12. Please, if you're an idiot, do not apply! I can't take it anymore. I want some smart crafty players to entertain me next summer not Chrissy Snow from Three's Company. And whoever suggested I go out for BB12 in yesterdays comments, here's what I have to say about that: Hell no! Knowing that there are evil people like me out in the world making fun of the HG's each and every day is not my cup of tea. I'd totally hook up in the house and then I'd be labelled the House Slut and be forced to do Playboy after I got out or some shit like that. I'd have to tour the country judging wet t-shirt contests and, as fun as that sounds, it probably gets old real quick. As flattered as I am that you think I'd make a great HG (I totally agree btw), I think I'll stick to my high maintenance existence and continue to observe from the sidelines. The idea of 10 weeks without internet, TiVo, or my leprechaun is too horrific to imagine.

Quick hello to Cheryl. What the hell took you so long babe?

One more thing, they reset the votes over at the BBTop50 so I need your votes more than ever now. I was ahead by almost 300 votes. WTF! Bitches. Ok so click on the voting button up at the right hand corner of this page and then click "Enter This Site". Thanks everyone!

Gah! One more thing... that shitty site that's totally stealing from me just gave away a mug in some contest... are you fucking shitting me? Why can't they get any ideas of their own?