Don't You Touch My Piggies! 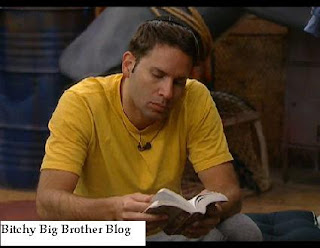 Dear Allison Grodner,
I don't care for you. I think you're delusional and possibly in need of medication. Every year your twists pretty much suck ass and every year you force HG's down our throat with inaccurate CBS editing. Last night you went overboard. Editing Lane to look like a moronic hillbilly while simulataneously making Brenchel look somewhat normal pushes the boundaries of good taste. And, for the love of god, do NOT bring Jeff back. I realize he makes you wet and all gooey inside, but enough already! He's a moron with an annoying accent who's really not all that good looking when you stop and think about it. Furthermore, the handling of the Feeds this year is beyond atrocious. Technical problems aside, 4 cameras on someone eating (loudly and grotesquely) is ridiculous. Scheming being cut short so I can see a nauseating redhead on an elliptical is nonsensical. Please retire and leave the show to someone with taste - and take Robyn Kass with you.
Love and other indoor sports,
Colette Lala
The day began with a frustrated man-child in a little hat yelling at some half naked women. Yup, Andrew's angry and, for some reason, he can't hold it in. Kristen and Kathy were in the bathroom getting ready for the day. Kathy was about to step into the shower and Kristen was either brushing her teeth or blowdrying her hair. In walks goofy awkward "worst eater of the year" Andrew. He marches up to the girls and begins shouting "Stop playing me like a fiddle!". Look, Fiddler On The Roof, no one's playing you like a fiddle so just pipe down. Kristen is shocked and says, "I have no idea what you're talking about." Andrew, wide-eyed and crazy, huffs, stomps his feet, then turns around and walks out. Kristen mutters that he better talk to her like a normal person from now on or she might shift into a grizzly bear and show him what's what. 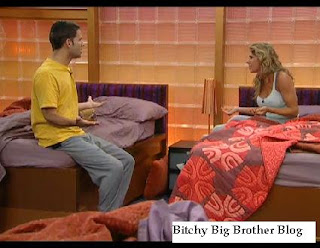 A few minutes later Captain Douchebag is at it again. He finds Kristen in the bedroom and begins to scream at her for not consoling him. Andrew's big beef (with no cheese on it mind you) is that Kristen has been spending time all week with Kathy. He actually says, "I want to be comforted!". Kristen shouts back, "You're digging your own grave!" Andrew retorts, "You're digging YOUR own grave!" Aaaaaand scene!

Was it good for you? Yeah, I dug it too. It was great to see Kristen shake her calm exterior and really let loose. Unfortunately, the whole shouting match was cut incredibly short by that nosy overly jealous bitch Rachel when she walked in naked and wrapped in a towel. The other HG's at least had the decency to stay back and eavesdrop outside the door like any normal person would, but Rachel knows a good clip opportunity when she sees one. She's no dummy. Fights get aired on CBS and what does Cunty McCunterson want more than anythng else in life? Attention and air time. Worse still, the only part of the fight Rachel really caught was Kristen saying, "You're digging your own grave." so of course she interprets it as Kristen threatening death. Outside the bedroom Matt, who's slightly douchey yet much more open-minded than Rachel, tells Ragan and Britney, "Andrew digs his own grave everytime he speaks." Ahhh I see someone has finally had a change of heart. Welcome Matt. The sane world is a fun place to be. Please take a brochure and have a look around. You're a little late to the party (no sane person would let Brenchel be safe), but you're welcome to some refreshments and appetizers. We hope your stay is a pleasant and comfortable one.

So after all the excitement everyone begins approaching Kristen wondering what the hell just happened. She recaps the story accurately and says that Andrew was upset because he thought that she was only consoling and comforting Kathy. In fact, Kathy was the one who sought out Kristen not the other way around. Kristen was open to talking to anybody all week long. It's not her fucking fault Andrew hides away by himself doing god knows what. 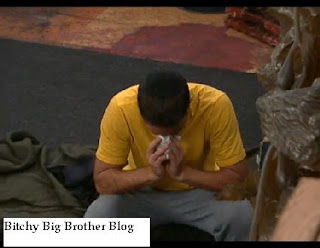 Speaking of hiding all by himself, that's exactly what Andrew did after attacking Kristen. He shuffled back to his little Have-Not room and began to cry like the little bitch he is. A grown man, a father, a doctor runs and hides so he can cry over a 20-something girl not consoling him. Go back and reread that sentence again. I want the full weight of it to really hit you. I'm sorry, but if I ever happen to be in Miami and a foot problem arises, Dr. Andrew Gordon is the last fucking man I'm letting lay his hands on my little piggies. Worse still, he turns to his Bible for comfort. Maybe he's looking for the Leviticus passage that says, "Thou shalt throw baby tantrums and cry for hours." Who knows?

As if Andrew wasn't bad enough, we're now treated to Ragan putting on airs and making the "necessary" visits to everyone letting them know that he's going to vote for Andrew to leave. He doesn't just say, "Look bitches, I'm keeping Kathy. Deal with it." No. He launches into a speech about good and evil, spirit, sanctity, equity, something about the truth setting you free, and he may or not have quoted Lincoln at some point. I don't know. It was ridiculous and I don't really have time to go through it all. In a nutshell, Ragan told Brenchel, Andrew, and Matt that Andrew said something snarky about the Have-Not's which was a clear indicator to him that Andrew's character was tainting the spiritual equity of the house so now he's voting him out. Whatever. I hope you get laringitis Ragan. 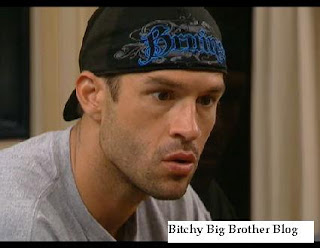 This brings us to the juicy part. OK so Andrew is still crying and Brendon sneaks in and tells Andrew that he needs to fight to stay. Andrew says that on Thursday he's gonna make a speech that'll shock everyone and leave Brenchel in good standing. Brendon isn't too thrilled with the idea of Andrew making another one of his speeches so he advises Andrew to hold a "house meeting" to apologize to everyone. Andrew starts to weep again saying that apologizing won't help. They begin stealth whispering and it was really hard to hear, but I think I heard Brendon telling Andrew to tell Lane that he's after Brenchel. Brendon was also saying something about how the votes may go and I heard Andrew say, "Are you serious? Are you really that clueless?" That kind of made me laugh.
In the end, there was a lot of blubbering on Andrew's end and hot air on Brendon's. Andrew actually agreed to do the "house meeting" plan and, at home, we all got super excited for some fireworks. Miraculously, Andrew managed to sop up his tears and go outside for a breath of fresh air. He begins to talk to Enzo and he mentions the "house meeting" he wants to have. Enzo sighs and tells him that he can't blow up on people like he's been doing. He's on the block! He needs to watch himself. Andrew blames stress and the slop diet for why he's so douchetastic this week. 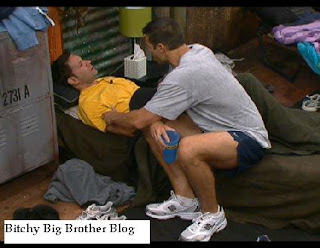 While we waited, Andrew started to cry again. Oh for fuck's sake, he cries more than I did when I found out Jeff was going to be visiting the BB12 house for a night. I just can't escape that guy. So yeah, Andrew is now doing that loud, snorty, hiccup like crying thing and Brendon sneaks in to console him... again. Brendon starts talking about Andrew's daughter and how he needs to stay in the game and it's so not helping cuz Andrew is only crying harder. Brendon tells Andrew how genuine he is and, for a second, I thought they were gonna make out or something. I think it might have been the only time I actually wished Rachel would have entered the room. She's still not too keen on Andrew and it drives her nuts that Brendon has little secret plans with him.

After hours of waiting, the house meeting finally happened. Of course, I missed it, but those sassy bitches over at onlinebigbrother.com informed me that it was like 3 minutes long and all Andrew did was cry and apologize to Kristen, Brendon, and Rachel.

Unfortunately, this is where I leave you today. I have some personal stuff to take care of today that sucks so much more than you could ever imagine. I'd much rather sit here and write for you assholes. The good news is all these interruptions I'm having will soon be over. I don't know if I'll be able to blog tomorrow. I'll be gone most of today and into tonight, but I'll try my best. Perhaps I can cover the HOH room reveal.

So, who do you bitches want to go home tonight? Who do you absolutely do NOT want to win HOH? Would you ever trust your feet to a crying baby like Andrew? Comment it out bitches and have a great day!
Posted by Colette Lala at 7:54 AM