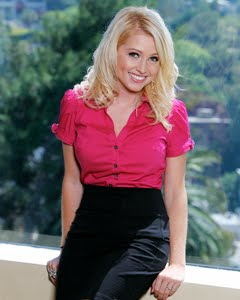 The day started with the heat... hot, sweltering, oppressive heat. A stunning girl with a spring in her step goes about her business running errands, popping in to say hi to friends, and shipping a package off at the post office. She flips her hair just so, slides into her leather upholstery, turns her key in the ignition, and then.... NOTHING. Fucking nothing. Sure, I'm talking about myself and not BB, but, trust me, my adventures totally trump the BB12 adventures yesterday afternoon. So my car wasn't cooperating and I was melting into a small puddle on the floor and what do you think my first thought was? "Dammit! What if Mr. Salvatore strikes again and I'm stuck sitting here with these post office assholes?!" I called Flo over at Progressive told her to hightail it on over to my location and rescue me because I had bitches to blog about, people to make fun of, and more evil Britney metaphors to plan. Flo said, "Who's Britney?" I replied, "She's the breath of the devil. She's the bump in the night. She makes the hair on the back of your neck stand up straight. Just trust me, she's not to be trifled with and I'm pretty sure she eats placentas for breakfast." Flo tinkled a little in her white jumper, a big beefy tow truck driver arrived, and I was finally rescued. Hooray! I arrived home with my hair stuck to my face, my will crushed, and I began a frantic search for my favorite gin tumbler. Let's recap, shall we?
I turned on the Feeds to find the HG's playing a game of "What Would You Do?". They asked questions of one another like "Would you suck Ronnie's balls for a chance in the Final 2?" and "Would you have sex on top of the covers for $500,000?" As my personal life seems to be the result of an evil voodoo curse, I answer yes to all of the above questions. I'll whore myself out for $500,000. What do I care? I'll move to Bali where I'll undoubtedly be bitten by a deadly spider and that'll be the end of me, BUT at least I'll die with a tan. That's all that matters. 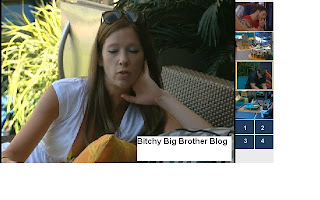 We get some more mindless chitchat that really has nothing to do with game play. Annie's the only one talking strategy, but at this point she's a broken record wondering why her, why is she so threatening, why not Rachel, everyone will be sorry, blah blah blah. *sigh* Yes Annie you're making some good points. The problem is you're fucking annoying and, at this point, people just don't really like you. If the house were thinking strategically, they'd keep you, but they're not. They're thinking personally right now. It might bite them in the ass in the end and I know it sucks for you now, but please, for the love of god, take off your turtleneck flip-flops and shut the fuck up already! Play pool, go swimming, stick a ladybug in the heart (that might get you on Britney's good side), but, for crying out loud, ENOUGH with the "why me" crap.
Fast forward to BBAD... Annie is still asking "Why me?", "Why not Rachel?", "Why aren't turtleneck flip-flops more popular?" I stabbed myself in the eye with a knitting needle and let the blood drip down my chest. I guess I'm doing laundry tomorrow. I wasn't knitting or anything. I just bought one for situations such as these. Knitting needle on retainer if you will.

Just when I thought all hope was lost I hear Annie telling Lane that he's a "teddy bear stuffed in a hillbilly's body". Lane replies, "Why would you say that?" Annie says, "I want to rub your face in shit." See? Now this is good stuff! This is what BB12 should be all the time - poop references and insults. That would be like the best summer ever. More people should threaten each other with poo, that's all I'm saying.
OK so later that night Brendon and Rachel are fucking around under the covers. I'm thinking there's no penetration... at least that's what Rachel wants us to think. Upstairs in another room, Britney is on her evil high horse bestowing goodness and genuine love onto Rachel. She tells Monet, "Rachel is good at being a whore bag slut face!" *pause to appreciate* LOL Now, we're talking my language! I still don't like Britney and I'm quite certain she's working for Osama Bin Laden, but if she's the only one bringing any sort of drama, I might be forced to reevaluate her. You bitchy readers might think you've influenced me, but, in all honesty, any girl who uses the phrase "whore bag slut face" could easily earn a one way ticket into my heart. 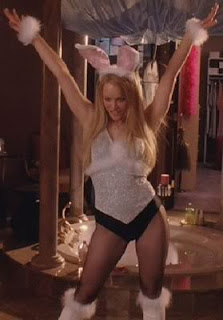 Monet and Britney agree that Brendon needs to go ASAP. Well, assholes, the quickest way to facilitate this is to GET RID OF RACHEL this week! It's like in Mean Girls when Janis runs downs the list to dismantle Regina George's life. You systematically take away everything she values in life. As we're talking about Brendon right now, the first way to destroy what he cares about is to kick Rachel to the curb. The second strategy might be to ban the use of the word "I" and, thirdly, replace his lean chicken breasts with Kalteen Bars. You put all those together and he'll be a weepy paunchy mess with no hopes of becoming the next Jeff and Jordan. In the words of Reese Witherspoon, "It's a completely brilliant plan!"

Other than the bitching and incessant whining, we do get one tiny little nugget of value. It turns out that everyone is trying to get to the big secret that Annie knows about Brendon. The secret being that Brendon is a physicist or some shit like that. At this point everyone but Rachel and Annie think he's a swim coach. The others suspect that Brendon may have something science related in his background. That's the big secret that everyone wants to get to the bottom of? Oh for fuck's sake, Jordan was a professional idiot and that didn't stop her from winning. Ass Licker was a phony doctor and look where that got her? She's turning tricks on Hollywood Blvd. with ratty troll doll purple streaks in her hair and deformed boobs. The only person who's background might make them a threat is Matt the Mensa member. Although, so far I'm not seeing him Mensa-ing anything to death so who knows? Maybe he slept with someone on the acceptance board. I'm still waiting for the flashes of genius to overwhelm me.

Unfortunately, that's all I got for today. Please accept my sincerest apologies, but my drama coupled with the boredom in the house does not an interesting blog make. I'll be back in top form tomorrow. I promise. I would, however, like to address all the assholes calling BB12 the most boring season ever on Twitter. It's been a week you fuckwits. It's clear these players have watched last seasons and have learned from playing too hard too fast. The fierce strategy and balls out fighting will come. I'm sure of it. We're just going to have to give it time. This is a new caliber of player with this year - they're careful, cautious, and hyper aware of everything. It was bound to happen after 11 seasons of watching the drama queens go home too soon. Bullying has been done, overplaying has been done, secret alliances are still somewhat in their infancy, but I have the utmost faith that like all other BB seasons, this one will bring some hardcore drama. I'm thinking that by Week 3 or 4 (or maybe even next week), shit will get ugly. Just you wait until Badda-bing blows up. Ya think Enzo's gonna sit idly by and accept his fate? Yeah right. Enzo's gonna release the pepperoni, snort some meth, and give me hours and hours and write about.

Let's not forget about Mr. Salvatore. He's hardly begun to strike. I hope my guess of Kristen is right because NO ONE will suspect her and she might be able to wreak some havoc.

It's gonna happen. Trust me. Be patient. Stop accusing viewers from influencing casting. If you think Robyn Kass listens to one iota of what viewers think, you're a fucking moron. Stop watching if you hate it so much. You won't be missed.

So, how are we all feeling today about Rachel and Annie? Do you agree that the Janis Ian plan is the way to go? Will Britney demand that we all sign our names in blood anytime soon? Comment it out bitches and have a great day!

For a more detailed account of all the crap I missed, please check out onlinebigbrother.com and be sure to tell them I sent you. Call them rude names too. They like it.