A Cinderella Story Makes Me Puke 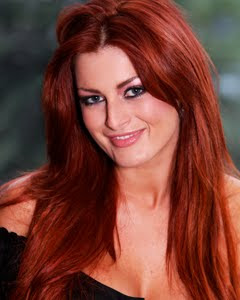 Before I get to today's blog, I need to address something that's infuriating me. Anti-Semitic, racist, and any other hate filled comments you assholes try to post on this blog will NOT be published. Yes, I have sometimes referred to Andrew as "Jewy JewBoy". This is not an invitation for Nazi propoganda. It's actually an homage to Sarah Silverman. Anyone who follows me on Twitter knows I recently read Silverman's autobiography Bedwetter. I'm an admirer of her comedy and the fact that she calls herself "Jewy" makes me laugh. Most of the comedians I'm attracted to push political and social boundaries rather than get caught up in the rigid and clearly unfunny political correctness infecting everyone today. Comedians like Lisa Lampanelli, Chelsea Handler, Jeffrey Ross, etc. not only inspire me and sometimes influence my writing, but they also make me laugh my ass off. I realize some of you might not have beyond an 8th grade education, but that's not my fault. I refuse to accommodate idiots and overly explain myself everytime I make an off color joke. I work blue. Deal with it. If you don't like my style, my honesty, or my profanity then please do not read this blog. I don't want you here and neither do the rest of us with the correct number of chromosomes. Fuck off. Let's recap, shall we?
(I've conveniently put a link to Sarah Silverman's Bedwetter on the right hand side. It gets Lala's stamp of approval.)
Well, let's start with last night's live show. What. The. Hell. Was. That? Annie gets voted out unanimously in favor of an overly giggly idiot with a built in alliance? Oh for Christ's sake, you've gotta be kidding me. And then.... and then... we find out that Annie was Mr. Salvatore! I really don't think last night could have gone any worse. Oh wait, of course it can! You wanna know how? Rachel, with the laugh of a thousand deaths, goes on to win HOH! *stabs self in the jugular with a fireplace poker* Why not just kill my puppy and tell me wine is now illegal? That would be easier to endure than Rachel giggling her way into the HOH.

Annie, I will miss you. I won't miss your turtleneck flip-flops, but I'll miss your conversations with Lane. I'll miss your will to fight. Most importantly, I'll miss your ability not to giggle AT EVERY FUCKING THING YOU SAY. Please come back Annie. I demand a "do over". Holla at your girl! 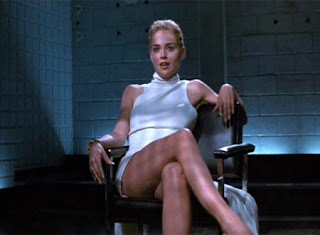 OK so yeah, Giggles wins HOH and Brendon pees himself with joy. He runs to embrace his concubine and they giggle together as the credits run. *puke* I, on the other hand, sat here contemplating the best way to mutilate my own ear drums while I waited for the Feeds to return. I decided an ice pick was a good choice as it's not only quick and effective, but it's also an homage to Basic Instinct and I make it a point to do at least one thing Catherine Tramell-ish everyday. Yesterday, ice pick. Today, commando. 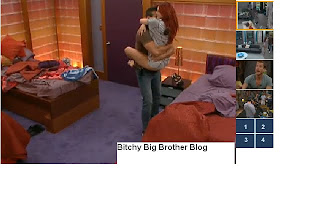 The Feeds finally return and Giggles and Brendon are on cloud nine. They escape to a bedroom to embrace and suck face while, at home, I sterilized my ice pick and poured a tumbler of gin to numb the pain I was about to feel. Brendon even calls Giggles "my queen". All together now: Ewwwwwwwww. Apparently, Britney was feeling kind of like I was because she was sullen, quiet, and mad at the world. One thing that really got her goat was how Andrew made a big fuss congratulating Giggles when she won HOH. He was happy for her and happiness is like kryptonite to Britney so she was understandably pissed. She goes right up to Andrew and tells him point blank that he shouldn't have been happy for Rachel and that it personally offended her. Andrew runs and tells Matt how psycho Britney is while Britney and Monet sit together convinced they're going on the block.

Staying with Britney... for some reason Badda-bing is now convinced that Britney is Mr. Salvatore. Well, they were also convinced that Annie was the perfect person to evict. Let's just say I don't think I'm going to be taking any financial advice from Badda-bing anytime soon. They fucked up. They fucked up big time. Hayden knows he messed up. You can see it in his face. He'll never admit it though. I'm thinking his helmet is on too tight or something. Anyhow, Badda-bing now doesn't like Britney and their dream nominations would be Britney and Monet - just like the girls predicted.

While Badda-bing and the Evil Twins should probably be teaming up, they're waging wars against each other instead which, as Annie predicted, just serves to make Giggles and Brendon that much stronger. Speaking of Giggles, she's now sauntering around the house like she's some sort of goddess. She's looking into mirrors and giggling. She's touching her boobs and giggling. She's giggling, giggling, and fucking giggling. (kill me now) Eventually, she makes her way outside to sit in the hammock and receive well wishes from the lowly peasants occupying her house. I take one look at her in that hammock and I'm reminded of the Lady Of Shalott. I'm not really sure what the Lady Of Shalott did or why poetry was written about her, but I think it had something to do with evil curses and onions. Yeah, that sounds about right.

How genius is this comparison? I mean, come on! It's so good. 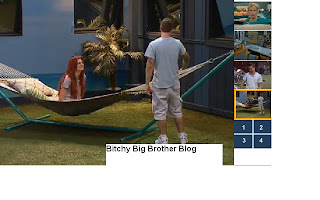 (Giggles in her hammock) 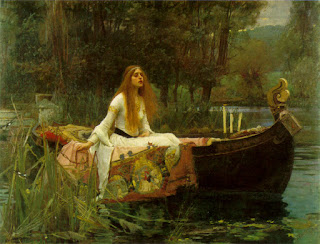 So proud by my Pre-Raphaelite comparison I dug a little deeper into The Lady Of Shalott. It turns out she saw Lancelot and he saw her and something wonky happen and she floats down a river and dies or something. Thank god... a happy ending! I call The Lady Of Shalott's death a "happy ending" in order to prepare you for the hammock conversation that is about make you hurl your innards. Are you ready? Grab a barf bag. Here we go:

Brendon and Giggles are sititng in the hammock talking about how blessed they are. Giggles turns to Brendon and says they can most definitely get to the final two together. Once they've won BB and America's hearts, they'll go on The Amazing Race just like Jeff and Jordan did. Brendon feigns ignorance and asks, "Oh, were they on The Amazing Race?" Giggles says, "Yeah, but they lost because Jordan isn't a competitor. I'm a competitior. I can win." Giggles turns to a camera and says, "Ya hear that CBS? We should be on The Amazing Race." Awful, isn't it? Wait, it gets better...

BBAD starts and Giggles prepares to get her HOH room. She comes sailing out of the DR all sing songy and asking, "Who wants to see my HOH roooooom?" Everyone kind of lays there and begrudgingly gets up. Rachel literally giggles for the next hour straight. This is not an exaggeration. This is not for comedic effect. This is bone hard fact. She. Just. Won't. Stop. Giggling.

The HG's gather outisde the HOH room and Rachel giggles her way into opening the door. She giggles over her photos. She giggles over her gifts. She giggles through a complaint that she didn't get her stuffed rottweiler. Then, she screeches, "I got tequila!" Since when has BB ever given the HG's hard liquor? It's a small bottle of Patron I think, but it's a bottle nonetheless. Then, it happens. We hear Rachel's letter from home. I'm thinking Rachel wrote it before she left and merely had her mom sign her name to it. It went something like this:

Wow! My fantastic wonderful amazing Rachel, you're the most perfect person on the planet. I'm so blessed to have endured months of ankle swelling and inexplicable pain to give birth to you. If only all other mothers were half as lucky.

I'm not surprised at all that you won HOH. You win at everything in life. You're so brave to move to Vegas. It takes skill, perseverance, and raw talent to be a cocktail waitress. You are a bright beacon of light in that desert wasteland of sin and debauchery. Wouldn't it be amazing if you got your own tv show? You'd be such an inspiration to crackwhores and small breasted girls everywhere. My dying wish is that you become famous and make your poor sick mother proud. Of course, I'm not dying or anything, but if I were, that would be my wish.

Have I mentioned yet that you're beautiful and perfect? We love you with all our might and we love you love you love you love you. Do you remember that time when we selflessly helped that hillbilly homeless family on the block? We're so nice to have done that. It's memories like that that I cherish. You're so selfless and giving - especially when you give your vagina to strangers. Your courage, sense of humor, and vivaciousness to take a Chemistry job and then quit it is unparalleled. Your brain power alone continues to astound me daily.

Continue to enjoy your journey and never hesitate to take a big bite out of whatever ass comes your way. Always remember your roots (psssst I enclosed some hair dye). Always remember who you are and that you were wanted because, well, it was too late to abort you in the third trimester. You'll always be a winner to me.

(Portions of this letter have been embellished. Scarier still, portions are word for word what her mother really wrote.)

It was not long after I heard this letter that I shot myself in the face. My eyeball is hanging on by some sort of stringy membrane. I'm bleeding all over my tank top and pieces of brain are coating my keyboard.

I have to end this post here, because I just can't take it anymore. Let me first say that I was right. Annie should have stayed. Even Monet and Britney agree with me now. Their decision has gone horribly wrong and now we're all forced to a week of laughing, guffawing, giggling, snorting, and french kissing.

So, what did you bitches think about last night? Are you happy Annie left? Will Rachel and Brendon weasle their way onto TAR18? Can an eyeball be superglued back into it's socket? Comment it out bitches and have a great day!
Posted by Colette Lala at 9:36 AM