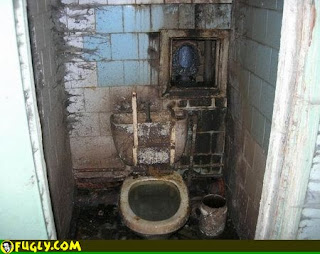 Speaking of poo, did you know that Rachel has broken every single toilet in the Big Brother house? Yup, she sits her ass down on the toilet and things shoot out that have no business shooting out. They stain and stink up the bathrooms making them useless. The poor HG's are developing Urinary Tract Infections because Rachel's ginormous shits are making it impossible to pee anywhere in the house. Just yesterday she had to have her minion/boyfriend Bitch Boy unclog her HOH toilet for the twentieth time. Poor Britney wanted to tinkle, but found she couldn't because Rachel's explosive shits turned the HOH toilet into that toilet from Trainspotting.

I imagine Rachel's breath smells a little like her HOH toilet. Her breath can sizzle the wings off of butterflies. Rachel will be sitting outside and a lovely Monarch butterfly will flutter by. It's spreads is fragile colorful wings, not a care in the world, you look at it and think to yourself "how lovely". Then Rachel walks by, opens her mouth, and shrieks, "I AM Vegas!" That poor butterfly never had a chance. It's wings freeze and slowly begin to sizzle. It starts out slow at first then it speeds up and turns the poor little beautiful butterfly into nothing but a tiny puff of smoke. It's sad really. I weep for the lost butterfly.

This brings me to the overnight antics of one Miss Rachel Reilly. The HG's get an alcohol delivery and it's LARGE. It's bigger than any previous delivery which means that CBS is well aware of how much this season sucks. Anyhow, the alcohol arrives and Rachel gets started. She's slow at first, but once that alcohol gets coursing through her veins she has to have more... and more... and more. She begins to talk about Vegas and how she's Vegas. She's oh so Vegas. Yes, Rachel, you are fake and phony and covered in dust and jizz and spilled liquor. We get it. You're Vegas. Bitch Boy looks on disapprovingly. Although deep down inside he knows he's probably gonna get get laid so that's something *sigh* I guess.

Rachel begins to twirl and grab her own breasts. Her dress ends up around her waist, nipples pop out here and there, and the other HG's can only sigh and search for ways to get away. They leave Rachel outside to talk herself while they seek refuge in the quiet safety of the kitchen. Bitch Boy tries to get her to calm down. He doesn't like that we've all seen her breasts by now. They fight and bicker. Rachel slurs and insists she's Vegas. That's all she cares about really - that we know she's Vegas... whatever the hell that means. It reminded me of that chick on Bad Girls Club last season. That girl who kept shouting "I run LA! I run LA!"

Remember the other night when Bitch Boy specifically asked Rachel if she fights when she gets drunk and she said no? Well, she's a big ole stinky greasy liar. Bitch Boy, naturally, hates belligerent drunks. He'd rather kiss and coo and make macaroni art over a few sips of White Zinfandel. The whole yelling, fighting, and flashing HG's really isn't his scene.

After hours of Rachel annoying everyone to death, the HG's finally turn in for the night and try to get some shut eye. Bitch Boy is extremely upset at what a lush his girlfriend is. He climbs into bed and whimpers with his blanket pulled all the way up to his chin. Meanwhile Rachel's a sloppy mess on the floor with her ass hanging out and alcohol seeping through her pores. Can you imagine what that room must have smelled like? First the poo then the lushy Rachel skin. Gross!

Brendon has a lot to think about. There's no way his mother will approve of this harlot, but, then again, he can probably score some sex from her so that's exactly what he does. He lifts her up off the floor, tells her over and over again he loves her, and coerces a drunk girl into sex. Hot! Clearly no condom was used and I'm thinking Brendon will be asking the DR for some Valtrex any day now. Brendon knows he's in over his head. He knows she's gonna be a handful. He'll have to hold her hair back when she's hunched over puking after a night of getting jiggy with it down at the club. He'll probably have to plunge toilet after toilet for the rest of his life. Random scarlet hairs will pop up in his cereal and macaroni and cheese. Glittery mismatched blouses and skirts will litter his bedroom closet. Dried caked on make-up will stain the bathroom sink. Lipstick will mark the walls and even an odd ceiling or two. It all doesn't matter though. Brendon is in love. He's in it for long haul. He'll stay with Rachel as long as she'll have him. It's a love story for the ages.

So, what did you bitches think of last night? Were you pissed Britney used the POV? Does Kristen have a snowball's chance in hell of staying? Is any toilet in California safe? How long does it take for Valtrex to start working? Comment it out bitches and have a great day!