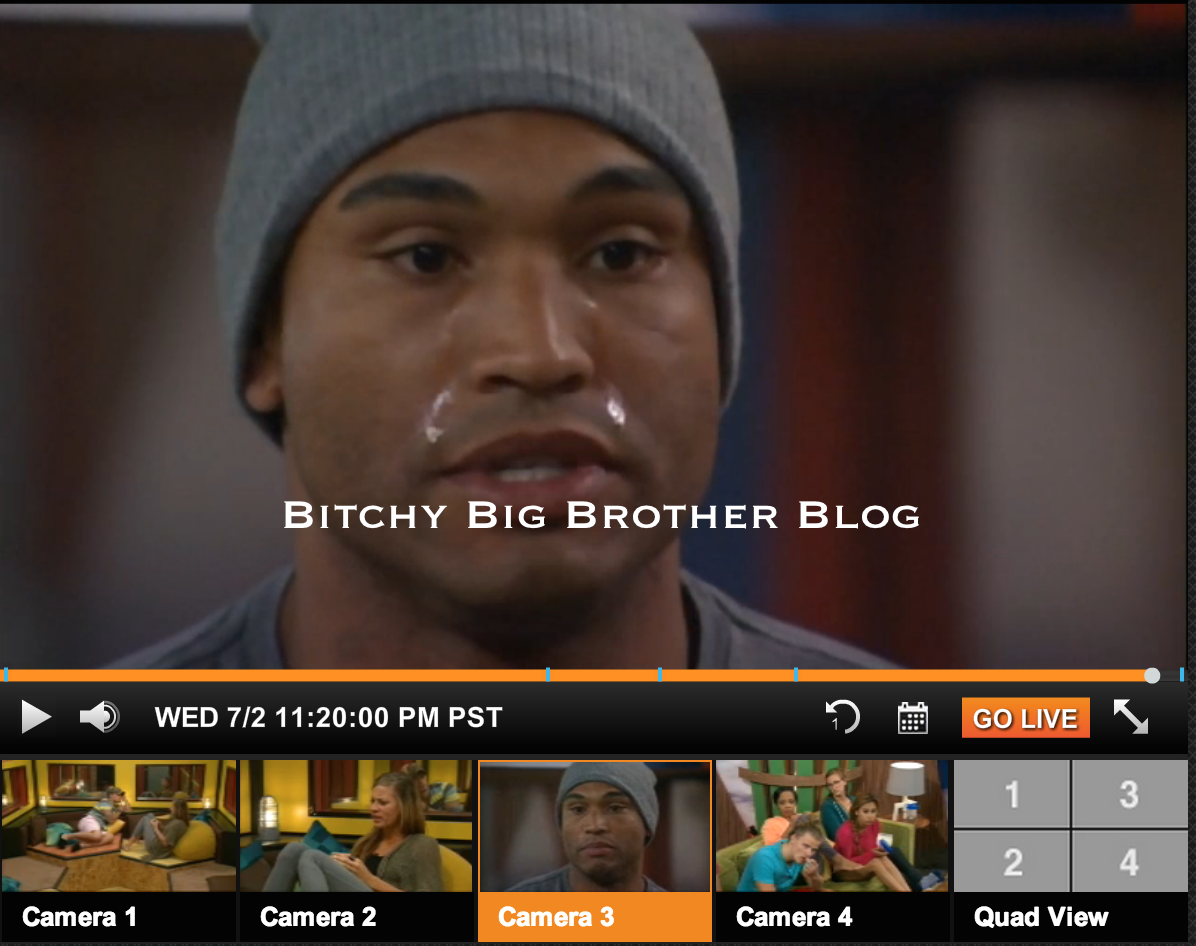 There are several phrases in the English language that excite me. "Gin & Glitter" is a big one. "Happy Hour" is another. "Buy one get two free," "Free gift with purchase," and "Double cash back" are also on the list. But one of my absolute favorites, and I'm sure it's yours too, is "House Meeting!" House Meetings in Big Brother are melodramatic narcissistic clusterfucks that typically do more harm than good which is why I hold them near and dear to my heart. And wouldn't you know it, we had one of these precious gems last night. So much for my day off. Let's recap, shall we?

Let me preface this by saying that I have no idea what precipitated this House Meeting. Today being my day off, I didn't exactly watch the feeds... AT ALL yesterday. This new batch of HG's lacks the deliciously controversial excitement I cherished so much back in BB15 and since I firmly believe in taking part in tasks that only add to my overall enjoyment of life, watching these knuckleheads sunbathe isn't exactly at the top of my list.

Alright, so let's start at the very beginning. Diva (Devin), wearing a ski cap in the summer, stands at the head of the room patiently waiting for everyone to gather around him to listen to what he has to say which I think we can all agree will be gobbledygook. Diva The Douche scans the room carefully counting and asks, "Is this everybody?" Someone assists him in counting heads and they realize that Payola (Paola) is still missing. I suggest that she was hiding under one of the beds in an effort to avoid having to listen to Diva pontificate, but that's neither here nor there.

Payola finally rounds the corner, rubbing her eyes, and screeches, "What?!" Frankie sighs, "We're having a House Meeting." 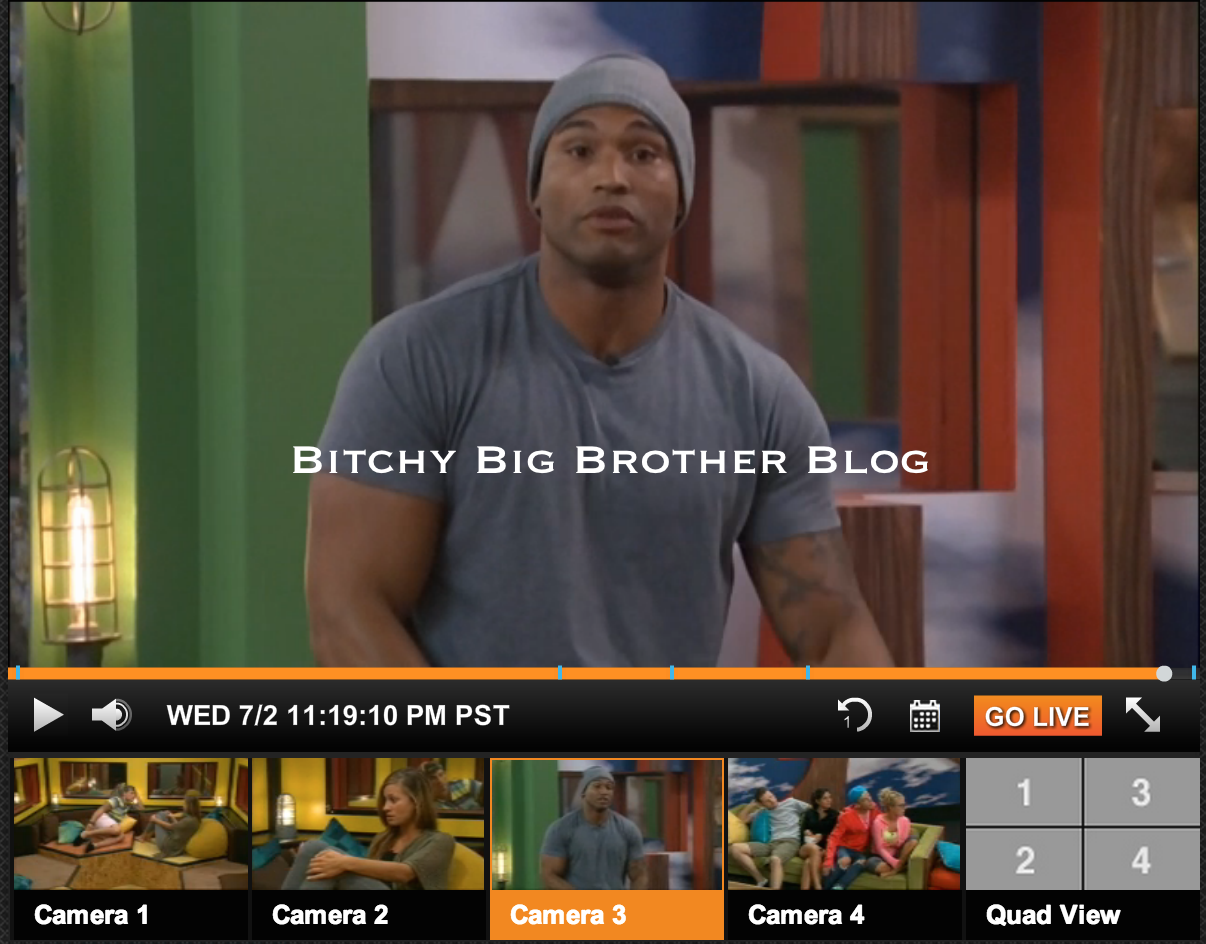 Once Payola sits her ass down, Diva begins, "Alright I just want to get some things off my chest. Excuse me if I get emotional." And then he starts to cry. His mouth contorts into that "I'm not gonna cry!" ugly face we've all worn at some point. Let it be known that it's SO awkward when that face is on an enormous man-child like Diva. Diva continues, "This is no game play. This is all real talk. You can take it for what it is. You don't have to respect me for it." Come again? Dude, NO ONE RESPECTS YOU.

Diva continues, "Coming into the house, I wanted to revolutionize the way we play Big Brother." *raises hand* But Douche, I thought you said that this wasn't about game play. Bzzz! Gank! Zrrrp! Revolutionize it, how? By being a big man baby who makes everyone observe his daughter's birthday for a solid week of solemn remembrance. Get the fuck out of here, d-bag. 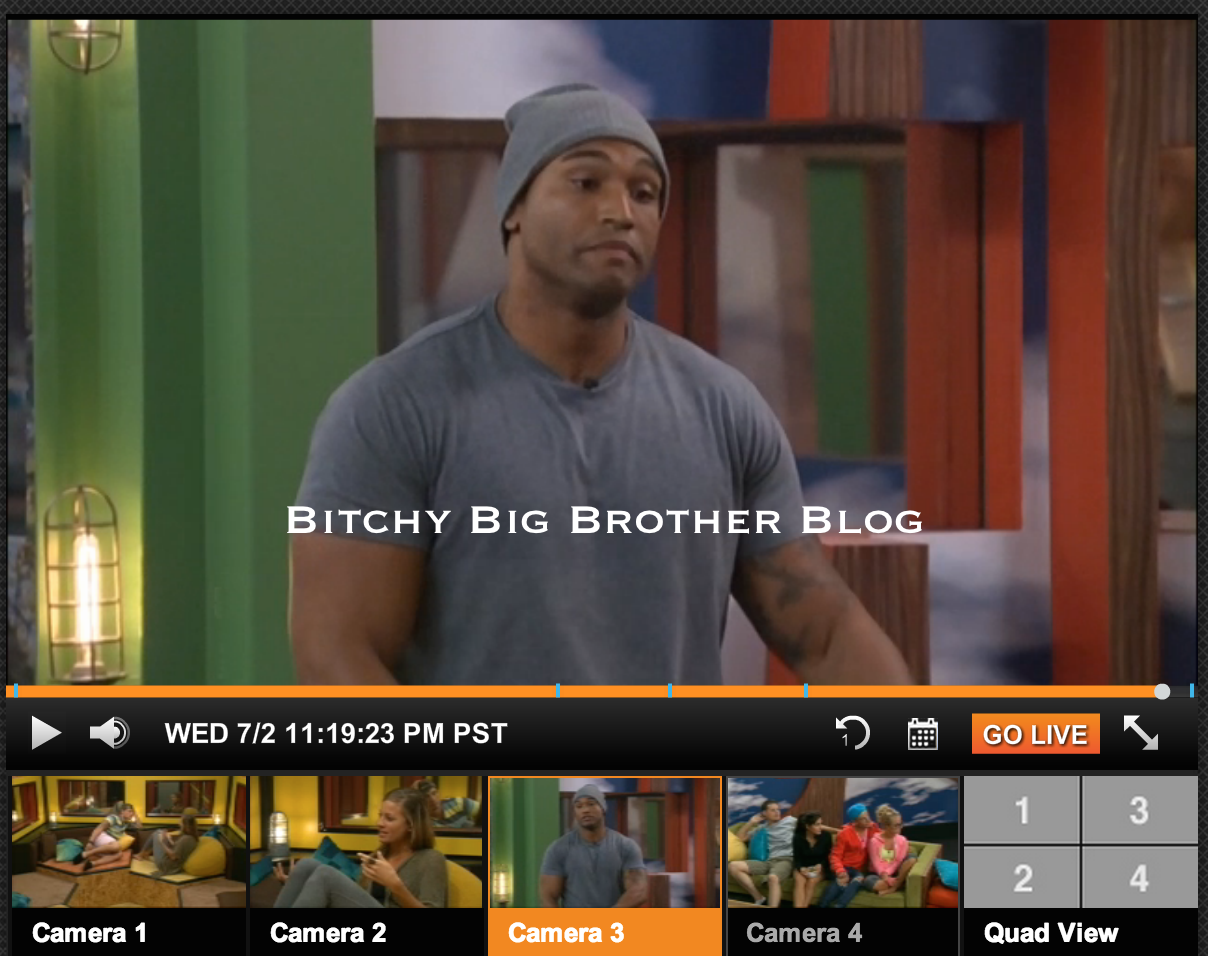 Oh Jesus, and then the blubbering starts, "I wanted to come in here and play the most honest and integral game that has ever been played." I'm going to stop you right there, Douchey Diva. Honest, how? By going behind your alliance's back and recruiting new members? By making your brah feel like shit? By LYING to a good man (Donny) who couldn't do anything mean if his life depended on it? Honest like that? Oh, ok. Just checking.

And then he really starts to hiccup and gasp. The tears! The evil vicious tears! He then pauses, exhales loudly and looks around the room where everyone is riveted by the train wreck taking place in front of their very eyes. (Side Note: As we've seen in the DR, Diva fancies himself to be a master gamer. I'd bet my life on all of this being a dramatic ruse. Oh, I'm sure he means everything he's saying, but I think we'll see on the CBS broadcast that he'll go into the DR and claim this was all strategy and part of his grand master flash plan. Mark my words.)

Dickhead Diva then says that he entered this house where some of the "greats" have played and how it has just now dawned on him that even the "greats" had to deceive at times. *eyeroll followed by tumble off the couch* And then finally we get to the meat of the issue. Diva says that he's already spoken to Donny, but he wants everyone to know that he was the one who forced Caleb's hand into nominating Donny last week and that Caleb had nothing to do with it. Watch out buddy, I don't think Caleb will take too kindly at the insinuation that you forced him into something. 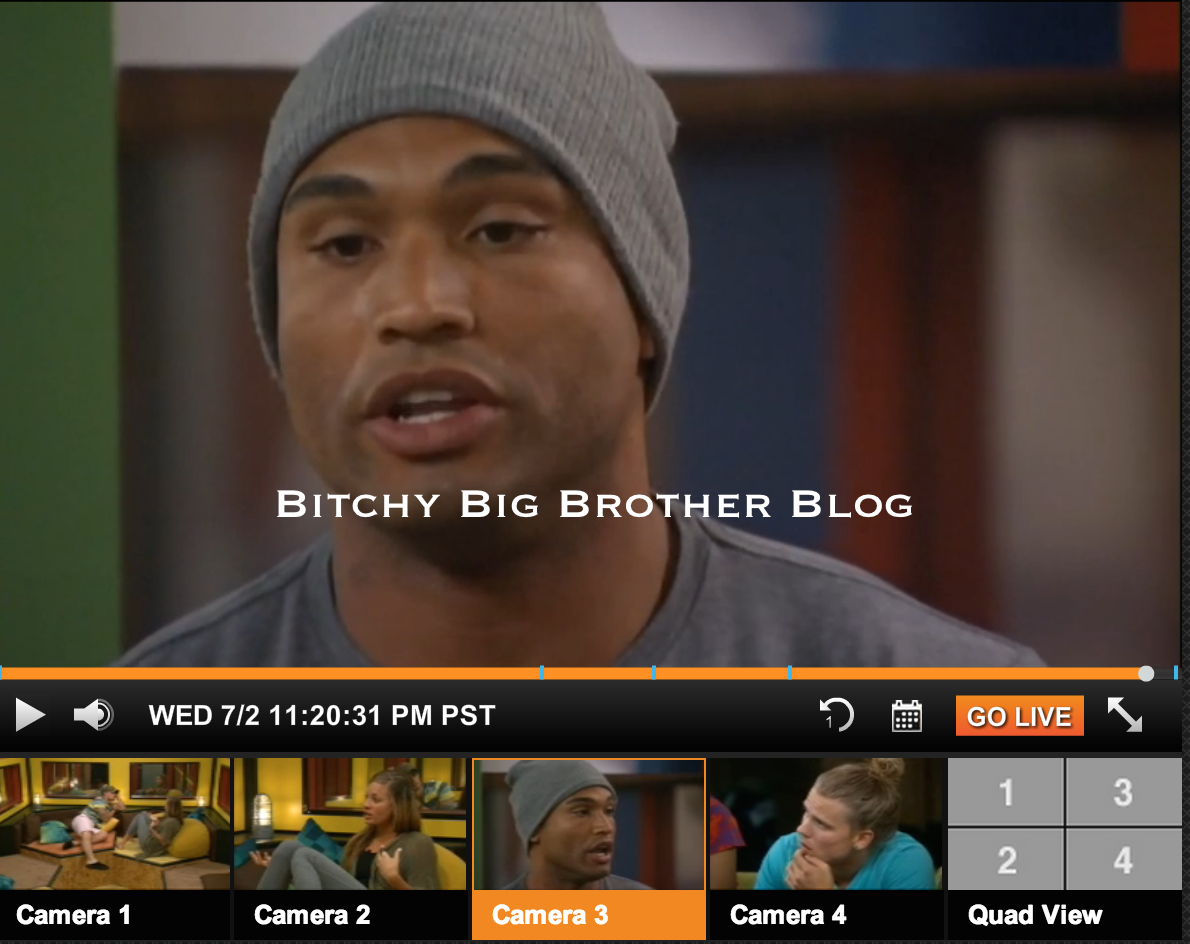 Diva continues and says that he was scared that Donny wasn't who he said he was and that over the last 4 or 5 days, he's finally gotten to know him and it breaks his heart that he has passed judgment on Donny. In Diva's heart, no amount of money, $500,000 or $500,000,000 is worth compromising his integrity. *ahem BULLSHIT!* Integrity? What integrity? And then he said something like, "blah blah flergle blah my little daughter gorple durdle blah." 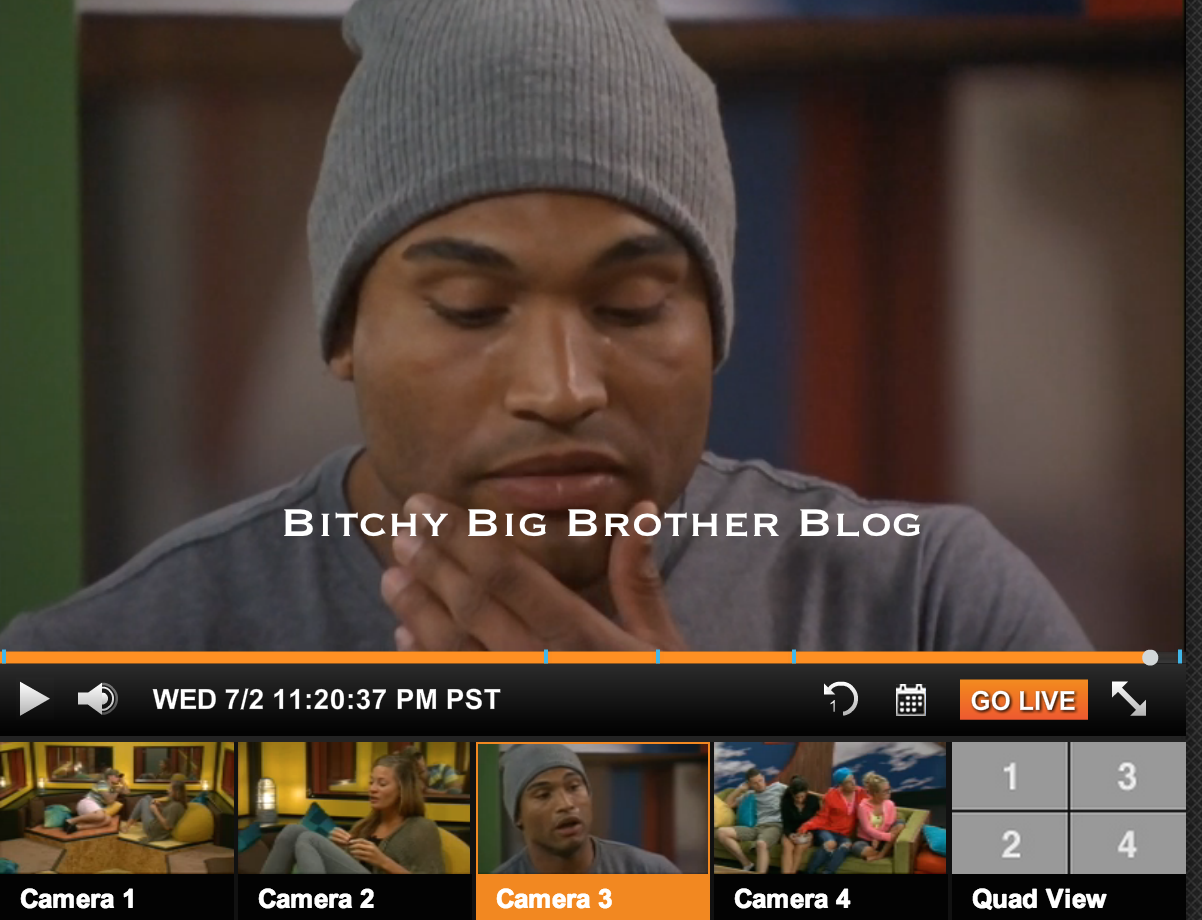 Valley girl douche goes on, "I've told you about how I was in rehab and how that was my rock bottom. Joey, if you go home, it's just a game. When I go out that door, I'm not going to bend over... " *giggles* Yes you will. And until he goes out that door and doesn't bend over, he's going to crush every competition. Grrrowr! And if he ends up going out that door, he's going to go out holding his head up high, ok? He literally said, "Ok?" Like what? Like you're addressing your constituents and don't they dare question you, ok? Like we should take you at your word, ok? No one likes you! How about that? OK???

Diva the Douchemaster just wants everyone to know that from here on out he's going to play the most honest game (more honest than all of YOU) and he's going to be the most integral person. *snickers* That's the second time he's misused the word "integral." He's going to be integral inside and outside of this game because he's NOT going to walk out of here and NOT be a role model for people who watch this game and truly can't differentiate between reality and not. *scratches head* Huh? Ok first off, Diva, you are not a role model and you will never be so let's just get that out of the way. As to people who watch the game, which would include myself, I know very well the difference of reality and fiction. I also know that what I'm watching right now is the biggest load of shite I've ever seen. How's that for reality?! 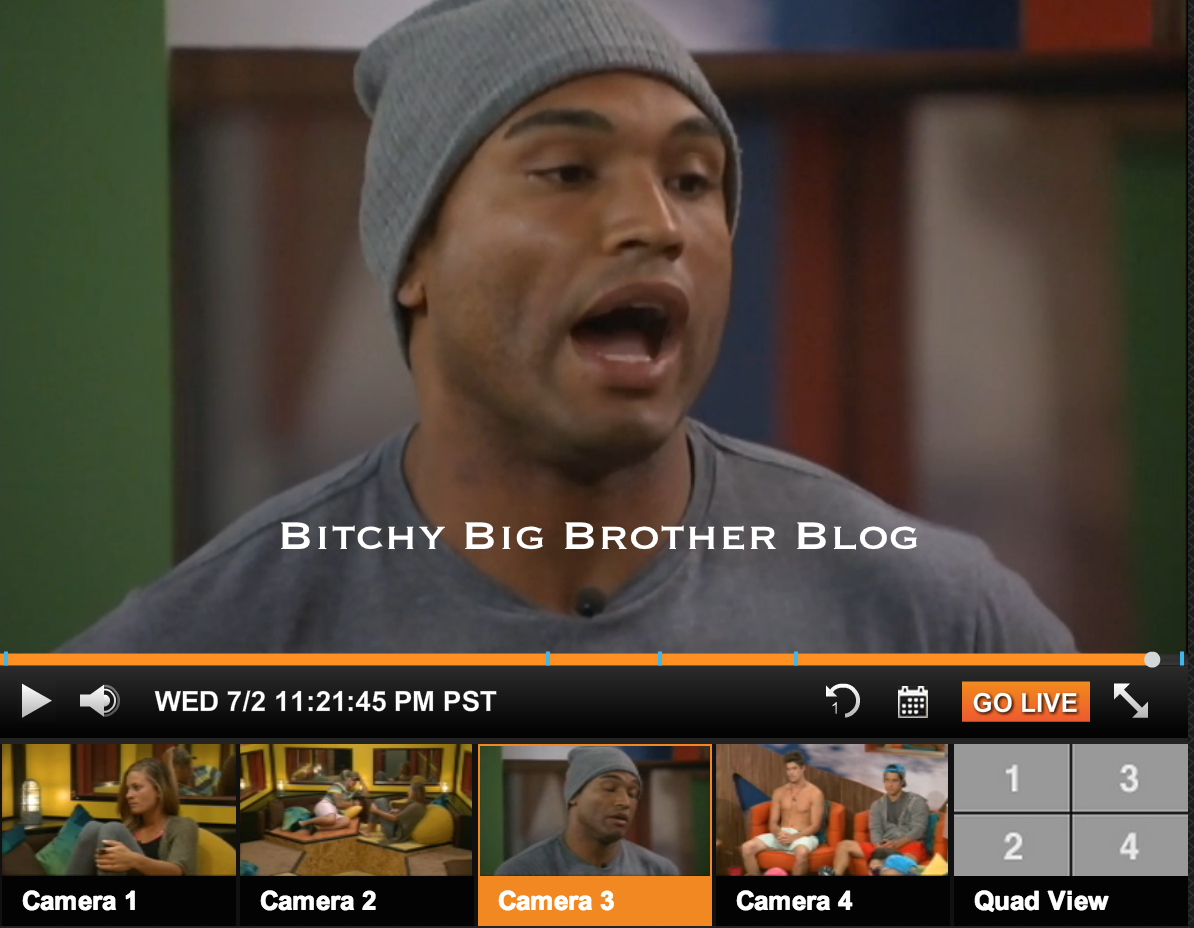 He continues, "My daughter... scrofle loogen drutle. My daughter... ghort yomer hrugen." Dude, you're embarrassing that poor girl. Shut up! "And when she plays this back 15, 20 years from now, I want her to know that I didn't compromise my integrity for anyone, ok?" Not another "ok!" "I feel so bad for what I did to Donny." Oh shut up. "Out of everybody here, everybody knows that Donny is the kindest man in this world. He's the most caring, most generous, most giving person." Get ready for this next part... "And he may not have a lot to give, you know (this is where he motions to his upper body), physically." Ha! Oh my god. That. Just. Happened. "But he has so much to give in wisdom and in heart and that means more to me in this game." No one cares about you! Your daughter has already petitioned to have a new daddy at this point. "And I just want to say that I'm very very sorry to each and every one of you because that was my decision to do that and Caleb went along with it cuz I forced his hand (no you didn't) and I just told him that it was the right thing to do. I can understand if you guys are upset or disappointed (none of them care!), but all I can do is just be honest." And then he cried like a little bitch.

Alright, I need to go kill myself right now. Fucking hell. That was brutal.

So, what did you think of that clusterfuck? Can I take tomorrow off instead? It is a holiday after all. Comment it out bitches and have a great day!