The Grapes, or rather, The Bananas Of Wrath

Goo goo. Ga Ga. Queen once came out with a song called "Radio Ga Ga" and I hated it. To me, it was like a rock band doing baby talk. I know the song was a commentary on the power of TV over radio, but it still sucked. I understand Lady CaCa (as Michael K. affectionately calls her) got her name from that wretched song. Sure, she's got some catchy tunes, but I'm so sick of her big ole bag of "look at me" bullshit. The point I'm trying to make here, and yes I do have one, is that baby talk should never ever ever be spoken by anyone over the age of 3.

Baby talk makes my ears bleed and my brain hurt. It's like nails on a chalkboard and I don't think I'm alone in thinking that. Live Feeders were treated to an inordinate amount of baby talk caca yesterday afternoon. Lydia had baby talk diarrhea of the mouth. She was cooing and teasing and questioning and pouting and oh my god I wanted to take a rusty spike and jam it in my ear. When Jessie joined in I threw up in my mouth a little bit. This brings me to my first public service announcement ever... 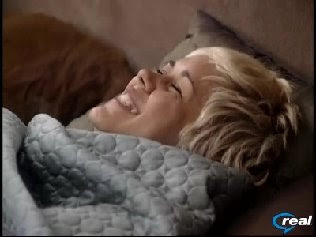 Ladies I implore you, never talk baby talk to another grown human ever. It's a crime against all that is good and holy. Angels in heaven will never get their wings if you talk baby talk. In fact, they'll plummet to earth leaving their angel intestines all over the place and that's not good for anyone. So if you don't want me pummeling you with a crow bar, DO NOT EVER TALK BABY TALK. Thank you and have a lovely day.

Yesterday and last night was basically spent with the HG's losing their ever loving minds. Casey is one angry banana and he's not shy about letting everyone know about it. It was funny until he took it to an ugly place. He said some very rude things about Ronnie's wife which, in turn, instigated a twitter war. People are actually taking the time to send her hateful and insulting tweets. She's not in the house. Ronnie is. If you get mad at anyone, get mad at Ronnie. Sending people tweets calling them fat and ugly is simply repugnant. If I see anyone sending someone who's NOT even in the game insulting tweets, you will be blocked. I don't care if it's Casey's sons, Jordan's brothers, Ronnie's wife, Jeff's grandma, Natalie's father... these people are off limits. Plain and simple. I'm not a Ronnie fan at all. I still think Michelle Talbott is a lovely woman. Ronnie is indeed running his mouth again and saying some things in the house I don't agree with, but I'll express my anger with that by commenting on HIM here and holding HIM accountable. Leave his wife out of it. Am I nuts here in thinking this is common sense? Someone please tell me if I'm not thinking rationally in believing that family members should be off limits.

Here are some Casey Banana Gems:
“I was a happy banana a couple days ago. I thought you were all my friends... until I found out different.”
“It’s all good, it’s all good, kind of …. Not really”

Casey also delighted us with some Renny inspired imitations of everyone. He imitated Chima's cackle when she laughs at her own jokes, claimed Lydia was a different person everyday, strutted around like Russell with his elbows sticking out, and said he didn't own a shirt small enough to be able to impersonate Jessie. LOL When Casey is funny I really like him. He's hysterical to watch and his one liners are great, but when he's faced with anything that's remotely challenging, he morphs into an angry yellow bitter banana. It's unbecoming and makes me forget all the humor he's brought to the house.

The HG's seem convinced that the next HOH competition will be endurance. In preparation, they're working out. Even Jordan managed to put down her sandwich long enough to hop on the elliptical. On the other side of the yard, Ronnie joined Russell and Jessie's "Who's cock is bigger" show. The boys were doing pull ups and showing off and poor Ronnie tried to lift an empty barbell and failed. Ronnie claims he'll kick ass in an endurance competition even shitting his pants if he has too. While that's admirable of Ronnie (ewww), I think he'll be one of the first to crumble in an endurance comp. If he proves me wrong, more power to him, but I really think he has no chance in hell of pulling out an endurance victory.

Later, perhaps exhausted by his thousands of pull-ups, Jessie passed out on the couch outside and Lydia, bless her jealous heart, thought it would be a hoot to paint his toenails. 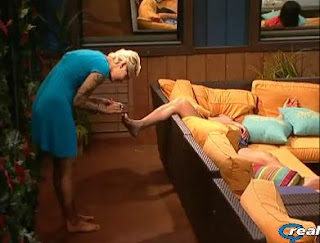 Jessie never stirred once and she managed to do both feet. Way to go Lydia! I was cheering you on from home. Here's what the finished product looked like: 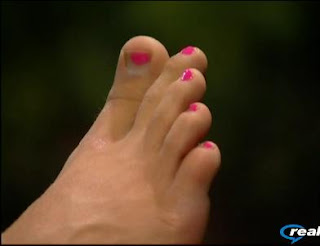 Let's move on to a houseguest I haven't spoken too much about yet... Natalie. It's getting harder and harder for Natalie to keep her lies straight. When talking about the election Natalie said she didn't vote because she didn't know enough about politics. No, Natalie. You didn't vote because you were supposedly 17 at the time. She also effed up when she said she met Obama at the graduation at her school. Lydia caught her and Natalie stumbled saying that she was thinking about going to a graduation that Obama was at. And later she told Jessie that if alcohol came, he should steal some and hide it away for her.

Oh Natalie. You walk like a duck and you dress like a boy, but that's not why I can't stand you. I can't stand you because you act like you are running that house (and according to Kevin you are), your lies make no sense (and will end up costing you the game because no one wants an 18 year old to win), and you are insanely jealous of Lydia (if you want Jessie for yourself just hook up with him and get it over with). For the record, I do not think Natalie is gay. I've been asked this many times by several people and after careful analysis Natalie is NOT a Sapphic sister. She's a tomboy who happens to be straight. I hate to crush any stereotypes out there (not!), but a tomboy does not a lesbian make.

Little Natalie, known as Gnat in her neighborhood, was tiny, spunky, and a trouble maker. Her father had spoiled her rotten giving her everything her heart desired... Ninja Turtles, G.I. Joes, Hot Wheels, Tonka Trucks... and, as a result, Natalie was bossy and hated by all the other girls in her town. She delighted in decapitating Barbies and stabbing My Little Ponies (somewhere Laura is crying over this) and never thought twice about delivering a knuckle sandwhich or 2 to the pretty girls with long blonde ringlets. Her father enrolled her in a martial arts class as a creative way for her to channel her anger. Tae Kwon Do fit Natalie like a glove. She thrived in being given permission to kick someone's ass.

She'd kick anything that would sit still long enough... the family dog (Poor Susie later ran away and joined a travelling dog circus. A dog can take being carried around by her tail for only so long you know.), table legs, the side of houses, potted plants, fence posts, etc. The whole neighborhood began to look like a giant dented can of beans. Families would wake up to find their mailboxes kicked in and they'd think to themselves, "Little Gnat must have had Tae Kwon Do class last night". Her poor father was forever apologizing and making trips to the hardware store.

One day when Natalie had her first Tae Kwon Do match with the little out of state martial arts studio her life changed forever. Her father had pressed her uniform and braided her hair even putting little tiny bows on the ends. Natalie had grumbled over the bows a litte. All she wanted to do was kick some ass and not get into trouble for it. The whole town came out that day to see what the Little Gnat could do. Bets were placed in a hope to earn back some of the money spent replacing yard gnomes and Barbecue grills toppled over by the Gnat's fierce feet. Her first match was over in seconds. Natalie owned that little rodent and almost got disqualified for spitting in his ear when she had him pinned down. She cruised through her second and third matches as well. Her coach had learned to run in and carry Natalie off before she could spit in anymore facial orifices.

It was her final match. Her braids were falling out, her eyes were wild and maniacal, and her feet couldn't sit still. It was as if an invisible pair of The Red Shoes adorned her tiny deadly toes. This was the moment Natalie was waiting for. Her head was swimming with the lyrics of her favorite song, "You're the best around, Nothing's gonna ever keep you down, You're the best around, Nothing's gonna ever keep you dooooown!" Her opponent came out and stood on the other side of the mat. He was small and scrawny and came from a hick town somewhere in Iowa. Natalie knew this kid was toast. They met halfway in the center of the mat, shook hands, and that's when it happened. Natalie met eyes with the most beautiful boy she's ever met. He had a quirky out of control cowlick, a smug sideways grin, and piercing hazel eyes. His chin was a little weak, but Natalie could forgive him that. As they shook hands, he leaned over and whispered in her ear, "Could you please let me win? My brothers are here and they'll kill me if I lose." Natalie pulled away and looked into his pleading eyes. Then she glanced at the name embroidered with care on his uniform. JESSIE. Natalie looked up at Jessie and said, "Yeah. I'll let you win."


Thanks to Bloodydove for the blog title