Someone Please Take Out The Trash 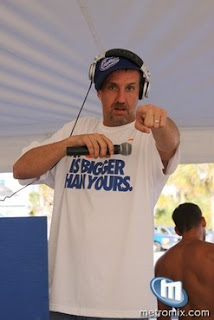 BIG show tonight, right? It's looking like we will be having our first edurance competition of the season. I love the endurance comps. I really do. Either the HG's are being hurled into a wall, tangled up in painful pretzel poses, holding on to a key for dear life, being covered in a runny vile substance... I ask you, what's not to love? Anything that tortures HG's is OK by me. The endurance competition coupled with the fact that there's a mysterious "huge announcement" makes tonight very exciting and here's where I climb on top of my soap box...

I am so sick of people saying how boring the house is, how awful the cast is, "Bring back Dr. Will!", Bring back Evel Dick!"... Oh just shut the fuck up. It makes me want to scream when all I see is constant bitching. If you don't like it, cancel your feeds, stop watching CBS, stop following 18 Big Brother blogs, just STOP everything. I don't want old people back. I say when your season is up, it's up. You can come back for All Stars and to host an occasional POV, but other than that I don't want to hear from you again. We are in week 3 people... WEEK 3! In almost 21 days I think we've had maybe 2 1/2 boring days (1 of which was yesterday). Quit your bitching, take a chill pill, and live in the now. Thank you.

So yes, yesterday was very low key. The HG's have finally learned not to push too many buttons the day before an HOH competition. Jessie got his HOH camera and took photos, Michele talked some more about her freaky sexual preferences, and Lydia totally pulled a Project Runway and made Natalie a suit out of trash bags. In anticipation of an endurance competition, Natalie is abnormally obsessed with getting wet. Who does she think she is, Chima? Is she the Wicked Witch Of The West? Will she melt if water touches her skin (insert Natalie shower joke here)? I have no idea why Natalie thinks keeping dry will give her an advantage. I hope it is a wet competition and that the water makes her suit of trash so slippery that she's the first one eliminated. 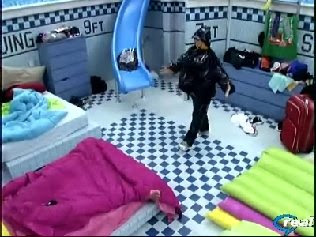 Lydia spent hours on that trashbag suit. It was actually really creative and kind of cool that she pulled it off. She made drawstrings into the jacket and a hood and everything. All Natalie did after trying it on was bitch about how a drop of water could get her face wet. She demanded Lydia put in more drawstrings and then she strutted around flashing gang symbols everywhere and sparring with no one. Natalie you are a tool. I guarantee if she loses HOH, she'll somehow blame Lydia. 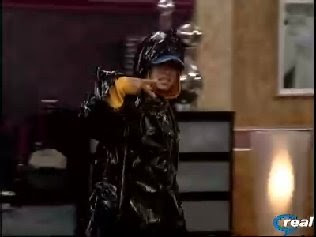 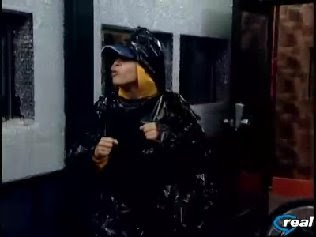 One more thing about Natalie before we move on, late last night in the HOH room Jessie mentions something about when he was 22. Natalie immediately chimes in and says, "Yeah I used to think the same way when I was 22 too." Uh oh. She then quickly says, "Oh wait I haven't turned 22 yet." She's such an idiot. Bitch can't keep her mouth closed long enough to keep up with the lie about her age. Women lie about their ages all the time. Why is Natalie finding it so damn difficult? (Insert joke about how Natalie isn't a woman here)

Earlier I mentioned a conversation where Michele once again delighted men in the live feed chats. Some of the HG's were talking about orgasms and kegel exercises. Jordan, no surprises here, had NO idea what a kegel was. Isn't this just common knowledge? Well, anyhow, Michele used to do them obsessively and now a ride in a bumpy car makes her orgasm. As funny as this is, I'm really doubting the legitimacy of it. Kegels affect an area nowhere near the clitoris. Instead, I think Michele has a long ass freaky clit that she plays with too much and is constantly daydreaming about sex thus making her more susceptible to a car ride climax.

Chima spent half the night all up on Russell's jock. She's so into him and really wants to hook up, but she's too paranoid about her grandparents seeing her doing anything. I hate that. How boring. She questioned Russ about his favorite sexual positions and how many women he's slept with. Russell refuses to divulge a number and says that men have the ability to completely detach emotion from sex so the number of their sexual partners is always really high compared to a woman's. (Lala glances over at HoodedWarrior) Russell is right. I mean, he's not saying anything we all don't already know, but he is blissfully unaware that women, too, have the ability to detach emotion. Keep that to yourselves girls because as soon as men figure out we're not always in love with them their worlds will start to crumble and ESPN will no longer makes sense.

Expect to see Casey go home tonight. He was funny and likable, but his naivete about the game was his ultimate downfall. He trusted people and that was his mistake. Getting mad at people for lying in Big Brother is like getting mad at Michele wanting to lick your naughty place during sex. Big Brother is made of lies and Michele was made for ass licking. There's no separating the two.

I'm going to actually end this early today. Real life is intervening for a little bit and I've got to motor. I'll make it up to everyone tomorrow with a thrilling recap and clips of the HOH competition.

I leave you with my picks for who I want to win HOH tonight: Lydia, Kevin or Jordan. Jeff can win only if the cliques are dissolved. I essentially want some Athletes asses on the block this week, particularly Jessie and Natalie. It's about time we see them sweat a little.

Who do you want to win HOH?