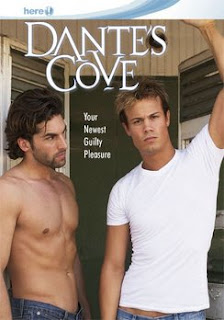 I've seen the clip and it's Braden walking down a hallway taking off his pants. He reveals an ass shot as he's knocking on a door to someone's room. A male answers the door and we see Mr. Braden's johnson in all it's glory. I've got to hand it to the kid. He's hung.

According to Wikipedia, DANTE'S COVE is ... "Dante's Cove is an American LGBT-oriented horror television show. The series airs on here!, a premium gay-oriented network.
Created by Michael Costanza and directed by Sam Irvin, Dante's Cove combines elements of the horror and soap opera genres in telling the story of Kevin (Gregory Michael) and Toby (Charlie David), a young couple seeking to be together and overcome the dark mystical forces that conspire to separate them. The show debuted in 2005 to a mixed critical reception. The third season ended on December 21, 2007. here! has confirmed that a fourth season will be in production in the fall of 2009.[1]"

Interesting. Is Braden gay for pay? Why couldn't I find him listed on Imdb? Has he changed his name?
As soon as I hear what Braden's story is, I'll post it here. Stay tuned.
UPDATE: Here's a link to all things Braden Bracha: http://www.mostbeautifulman.com/misc/BradenBacha/bio.shtml
Posted by Colette Lala at 12:59 PM