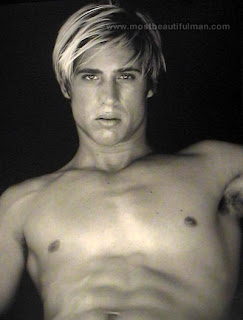 Braden Bracha is the 28 year old sensitive poet surfer - Dare I say a younger McConaughey with some Laird Hamilton thrown in? - who likes to collect shells and play chess. I'm not making this shit up. Check out his Most Beautiful Man profile: http://www.mostbeautifulman.com/misc/BradenBacha/bio.shtml. Anyhow this blonde whale saving environmentalist also has some acting credits under his belt to boot. I've seen the Dante's Cove clip (Hey there big boy!) and now I'm reading he was on something called The Brotherhood II: Young Warlocks. According to Imdb.com, he played Chandler Academy Student #1 in this low budget male version of The Craft. Upon further research, he was not a regular on Dante's Cove. Alas he only appeared in the episode entitled "The Solstice" (hmmm I'm sensing a witchy trend in young Brandon's resume). Clearly, Dante's Cove is a gay tv show (a lesser known Queer As Folk if you will) but is hunky Braden a full fledged Streisand listening gay?
Like James in BB9 (who'll do anything for a buck), I don't think he is. He's not identified as homosexual as far as CBS is concerned and we all know CBS loves it's labels. I think he's a Hal Sparks gay for pay kind of guy (which I love! Straight actors who have no problem playing gay have a special place in my heart.) Did Hal ever show full frontal on Queer As Folk? I can't remember. It doesn't matter if Braden's gay or not folks. All that matters is that he's already got the girls and guys out there in a tizzy. He's somewhat in the industry (clearly he thinks BB will seque into something else) and I wouldn't doubt that he was recruited for the show. Allison Grodner was right. Braden is definitely this years "eye candy".
Since CBS' announcement that the HG's will be divided into cliques, I think it's safe to say that Braden will be in the "popular crowd". No doubt the girlies will be hot for him. My fantasy would be a cat fight for Braden's heart only to have Braden send the gals to the curb and run into the arms of Kevin (this year's gay). Big Brother needs some hot homo loving (no, Natalie and Chelsia's dance does not count) and I'd really like this year to be the year it happens.
Personally, Braden does nothing for me. Men who are that pretty are usually useless lumps of muscle in the sack. I've got my eye on Lydia. I'll ignore the fact that she has a Harry Potter tattoo and I'll keep my fingers crossed that she's sassy, hot for at least one of the girls (who will hopefully be bicurious), and blessed with a quick wit.
You can find the link to Braden's third leg reveal here: http://bitchybigbrother.blogspot.com/2009/07/naked-houseguest-already.html
Posted by Colette Lala at 4:06 PM