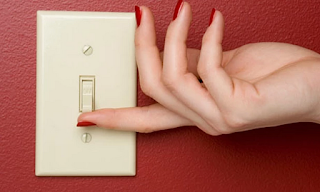 Sometimes things turn on with the flick of a switch, with a drumroll, with a curtain slowly rising or even with the loud bang of a gun shot into the sky. Big Brother 17, however, began with a Douchebag. A bouncing insufferable Douchebag of epic proportions. He jingled, he jangled. He dressed and undressed. He griped and moaned. He massaged his own nipples with creepy tenderness. And wasn't it all just a little bit glorious? Let's recap, shall we? 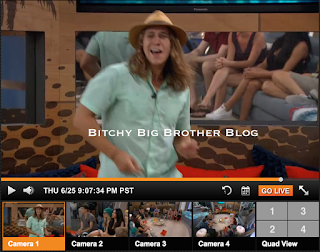 Ladies and gentlemen, meet Jace. He is a giant tool and like I suggested on the Big Brother Gossip Show this week, he's a shot caller and a leader in his own warped sun baked mind. 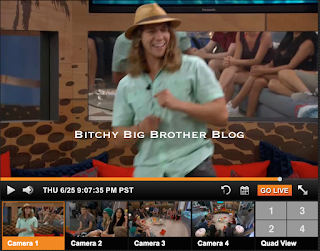 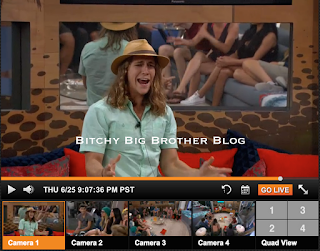 The second the feeds went live, Jace tap danced onto our screens and forced everyone to sit in a circle before introducing themselves and giving "shout out's" to everything from parents, siblings, friends, the girls at Claire's (Becky), dogs, and websites. It was loud and awful and I really wanted Johnny Mac to stick needles full of novocaine inside every single one of Jace's orifices. Sadly, that did not happen. Speaking of sadly! 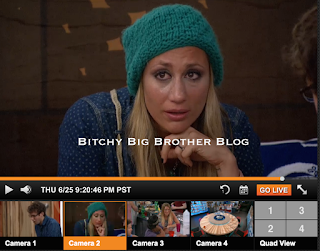 The mention of the outside world was much too much for Vanessa. After saying hello to everyone she cares about, she then spent the next 8 hours crying about how being away from her girlfriend is SO hard. Being in this house is SO hard. Having to lie to people is SO hard. Wait, hold up! Aren't you a poker player? Isn't lying what you do for a living? Yet one week in a house with 15 other people leveled Vanessa into a pile of crumbs and ash. The money on the line isn't worth it for her to be this sad. And THAT, right there, is why recruits are such a bad idea. They get to skip the pysch eval - I'm assuming this is true, because homegirl here needs a 5150 with a Haldol chaser - and they're thrown into something they really don't know all that much about. I expected moxie and sass from Vanessa. Instead I got snot and little puddles of make-up on the floor.

So that's how the night started, but let's do some quick housekeeping so we all know where we stand.

James and Jason both won their respective HOH's. James nominated Jackie and Steve with Jason nominating Becky and Johnny Mac. In the Battle Of The Block, that has yet to air, Becky and Johnny won thus removing themselves from the block. As it stands this morning, pre-POV, James is HOH and Jackie and Steve are on the block. BUT there appears to be a plan in place to backdoor Jace.

The plan is legit enough that everyone playing in the POV is planning on throwing it for Jackie to win. Letting Steve win is too much of a gamble and these homies want to ensure that Jace goes up and then out the door. I'm not sure what Steve did, but I'm guessing that he has rubbed the house in the wrong way doing something awkward or putting his foot into his mouth. Vanessa at one point made mention that she didn't like how the house was treating him. And then her face melted off again and her lifeless skull stared vacantly into the camera for another 85 minutes.

I guess Jace is a pain in the ass. I mean, the guy is an arrogant over-the-top douchemaster of all the douche people, but that's not even the worst part! To my horror Jace and my precious Austin are bros of the douchiest degree. The have nicknames for people, they walk around shirtless. There's lots of mutterings of, "We got this, Bro." And apparently, they hate Jeff. I'm not sure why, but they find him sketchy as all get out - mainly because of his "Dad Bod."

So basically I've lost my 2 favorites in the house - Austin and Vanessa - in one fell swoop. I'm not giving up yet though. Let's have a little faith. Maybe Jace will leave and Austin will become normal again. Perhaps Vanessa can scrape up what's left of her dignity and make another knitted chapeau with it. Who the hell knows. 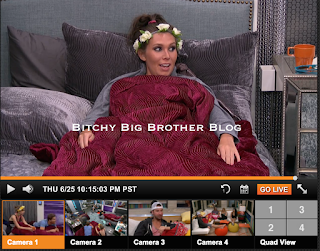 It's always a little difficult on Day 1 to figure out where the alliances lie and who is going after whom, but I get the sense that Clay and Audrey are quite close. An unlikely pairing, but I think I like it. Audrey appears to always have her head in the game. She watches the others closely and studies their mannerisms - something I expected from Vanessa, not necessarily Audrey. And that whole transgender thing? Not the slightest bit of an issue at all. Audrey is just another female HG. 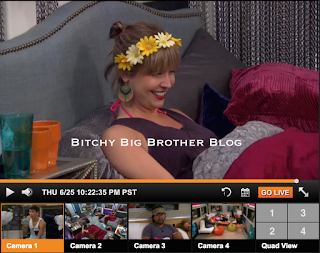 Speaking of the females, unfortunately Meg appears to be a part of Clay and Audrey's alliance. I say "unfortunately" because I can't stand her. None of them trust Becky and the consensus is that Becky and all of her price guns will be the next to go. Plus, Audrey thinks that Becky owns the store she works in since she won't shut up about it. The three worry that Becky or Liz will win the next HOH. From what I can gather, Liz is tight with Jace so she'll be none too happy if the lad is backdoored this week. 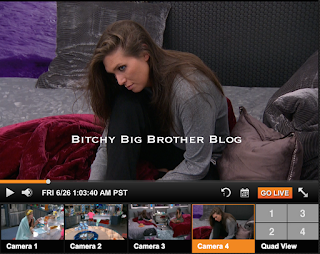 A little later on though, we find out that Audrey is a true alpha with a secret alliance (the one we saw on TV) with Da'Vonne. The two sit and discuss how long they'll keep Clay and Shelli around before getting rid of them. They decide they'll dump Clay first since Shelli has no social game to speak of. Audrey doesn't even think Shelli is playing the game and will be easy to beat in the end, but Da'Vonne has had her eye on her and thinks Shelli has been talking to both Clay and Meg. And as far as Vanessa is concerned, Da'Vonne doesn't think she has any real alliances. Audrey nods and implies that Vanessa is a total floater.

If we talk a bit about the guys, Jace is ticked off with Jason over something to do with the POV. I think Jason had "Houseguest's Choice" and didn't pick Jace so now Jace has a big bug up his ass. As far as Steve goes, he's creepy and shady and possibly wigging out over being on the block. No one is too concerned over him going home if the Jace plan doesn't pan out. 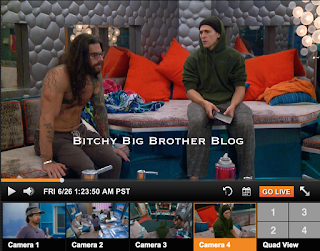 Speaking of Jace, he seems to be getting a whiff that something is "off" within the house. He talks to Austin in the bathroom, "I am REALLY pissed off right now. Jason was never my idea." I'm not sure what that means, but Austin advises Jace to calm down and go solidify his alliance with James so he doesn't get put on the block after POV. Jace whines, "This game sucks so much." Austin replies, "Dude, I think you're good... You're good." Austin guesses that James would probably put Clay on the block if the POV gets used. The conversation then turns to Audrey. They both agree that Audrey is playing all sides of the house. Jace says, "She's so fucking catty!"

I've been watching this conversation over and over again and I still can't figure out exactly what's going on. Earlier Austin was training Jason's glutes and from what I can gather, Jason said something to Austin about Jace? POV? I don't know. Jace got wind of what Jason said and now Jace is freaking out over this piece of knowledge Jason has. Jace suspects Audrey is responsible for spreading something while Austin suspects it could have been Jeff. If you know what this is all about, definitely leave a comment below because I'm completely lost. What I do know is that it's all sending Jace to crazy town and I like it!

Overall, we've got a strategic house with lots of lying and alliances already in place. As annoying as Jace is, I kind of hope he manages to save himself. Steve is bringing nothing to the table and the house would be no different without him. Who would you rather see go home? Can Audrey keep all of her plates in the air spinning? Will Vanessa ever get put back together again? Comment it out bitches and have a great day!