Bust A Cap In Her Ass 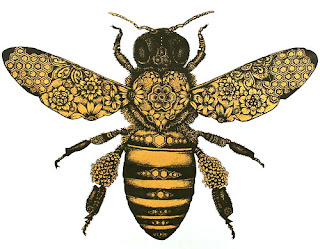 From ancient Egypt to the reign of Napoleon, the humble bee has been a symbol of immortality and resurrection. But for our purposes, here in the Big Brother house, the busy bee will be a symbol of, "Bitch, slow your roll!" Buzzing this way and that, fluttering near your ankles, humming in your ear, the simple bee can be a real pain in the ass. Making zig zaggy pathways upstairs to downstairs back upstairs then back down again, the so-called Queen Bee of the house is destroying her game and getting on every person's last nerve. Let's recap, shall we?

The day began simply enough. Vanessa rose from a pile of ash just long enough to creep into the kitchen in search of a napkin or a coffee filter to nibble on before going back to bed. But slowly and surely the house did arise. Jace disappeared somewhere in the backyard probably trying to smoke the artificial turf blunt he made while the rest of the house flitted this way and that preparing for the day.

In the Have-Not Room, we found Liz and Austin having a conversation about how they need to recruit more people into their alliance. I like this twosome. Austin is actually normal when Jace isn't around and Liz isn't a dumb giggly girly girl like Meg, Shelli or Becky. Watching them talk and plan about maybe pulling Clay into the fold was exciting. Vanessa was another name mentioned. Sure, she's a crumpled kleenex, but she's also a vote.  They were being strategic. They were increasing their numbers. I had hope.

Then, Day (Da'Vonne) walks in to pick up some clothes or something. Out of nowhere she says to Liz and Austin, "Audrey is working this entire house." And then just like that, poof! She was gone. At home, I scratched my head and thought to myself, "Wait, I thought Day and Audrey were in a super tight secret alliance. Why would Day say such a thing? Is she bluffing? Is this a poker trick?" But then I started to remember how Day has been saying similar things to some other people as well. There is never a preamble or an epilogue, it's always just, "Audrey be talking some shit in this house yo." So maybe they are not the mighty duo I thought they were??? 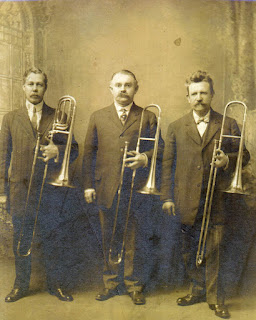 After that there was some yoga in the Living Room and then eventually the feeds went down for the big POV competition. And in that grand Big Brother tradition of never updating a Challenge EVER, it was the spelling comp. Remember, Jackie and Steve are on the block and the plan was supposed to be to throw the comp for Jackie to win. But out of nowhere, like a shot of Ritalin, Steve blows the competition to shreds (seriously, people were floored how he killed it) and wins with the word TROMBONISTS. Trombonists! Great fucking word. Good on you, Steve!

When the feeds finally return we find Audrey acting all weird and questioning everyone, "Who said that? Why are people talking like that? I didn't say that. Who is responsible?!" I looked around my Living Room at no one in particular and muttered, "What the hell is she talking about?" I turned to Twitter and asked, "What the hell is she talking about?" No one had answers. Neither my coffee table nor my Twitter confidants. But Audrey sure was fired up about something.

If any of what follows sounds confusing, just roll with it, because it is confusing and I still have no idea what the hell was going on, but it lasted for like 27 hours so we've got to try to work our way through it. 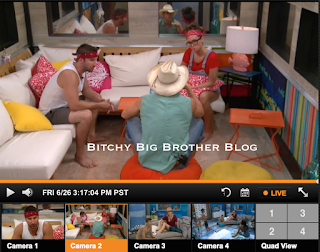 OK so Audrey grabs Jeff and pulls him into the Lounge. Audrey heard through the grapevine that Jeff said she was being sketchy. Jeff fidgets and is all like, "I didn't say that! Let's get Clay. He'll prove it." Then Clay comes in and Audrey asks, "Am I sketchy? Who's saying I'm sketchy? I'm not sketchy. Sometimes I like to draw portraits but that doesn't make me sketchy." Jeff and Clay were all, "We didn't say that. Jace and Austin did. Yeah, that's it. It was them!"


Look, here's what you need to know before we go on, everyone has been saying that Audrey is working the entire house. Everyone. She acts like the Queen Bee HOH and strategizes every second she's awake. She's playing too hard, too fast and, mark my words, it will bite her in the ass sooner rather than later. 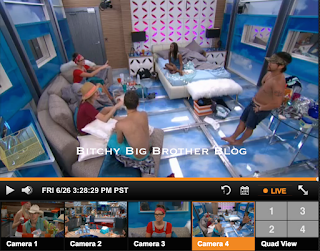 So then Audrey, armed with this new info about Jace and Austin, runs back up to the HOH and is all like, "They said so-and-so said I was sketchy and why would they say it? Who started it? Sketch, sketch, sketch, can't I get some damn pastels already?" The flibberty gibbets up in the HOH are basically pussies so they're like, "Austin is up to no good. It's his fault!" 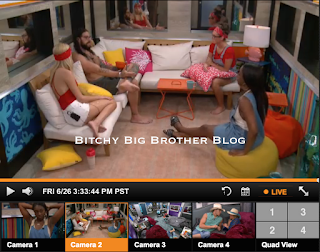 Then the Queen Bee buzzes back down to confront Austin. Austin was all like, "What the hell are you talking about? I didn't say shit." Audrey demands, "Get Liz in here!" Then Liz enters, "I didn't say shit, but you know what? Day was saying some smack earlier." Audrey shakes violently, "Day? Day?! Get Day in here!" Then Day enters and says, "I don't know what they're talking about, boo." And as quick as she entered, she disappeared. Audrey is relieved.

And then it literally just kept going like that - in weird circles - where Audrey questioned people and no one knew - especially me - what the hell was up her ass. And let's remember the most important thing - they just had the POV. Steve won and will remove himself from the block. Wouldn't you think that Audrey would slow her roll, keep HOH James happy, and ensure that Jace goes up and out? With a vacant seat on the block, the last thing I'd do is scurry hither and thither causing drama, but scurry she did. 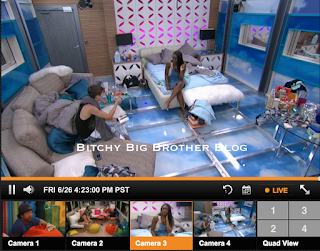 Ok so then Day goes up to the HOH with Jason. She says something to the effect of, "This BITCH! Audrey!" Ohhh really? Ok then, so now we know. Day is not tight with Audrey. She's just playing her. Then Jason says something about Steve maybe being the start of all this and Day goes OFF. She says, "That nig... ummm, I mean, man." Yikes. She smacks her hand over her mouth and silently curses herself. Look, I don't care if Day wants to drop the n-bomb. I'm not uptight like that. She's black. She can say whatever the hell she wants. Plus, it was pretty damn funny at the time. What else it told us is that when Day gets hot, back the fuck away or you just might end up with a cap in your ass. 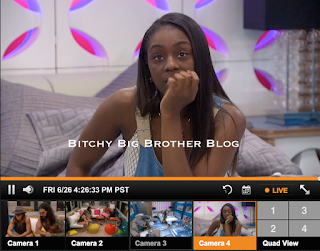 Eventually, James and Audrey start to trickle into the HOH and Day is still sitting there stewing. At one point she turns to Jason and asks him if it was really bad what she almost said. Jason assures her that she's fine. The conversation then turns to Jace and how it was probably his idea to spread a rumor that Jason would be backdoored. James then assures everyone that Jace will be going up on the block and that's that.

The drama starts to simmer down a bit with Audrey basically going room to room solidifying alliances with everyone she can get face time with. The funny thing is that the one alliance she holds dear - the one with Day - is the one that is blowing up her game. Day is stirring that cauldron. She's the troublemaker here, but what's kind of great about it is that no one realizes it's her! And when confronted, she just shakes her head and walks away.

I've got to end this here today. Lots to do, lots to do. Not to mention the Big Brother Gossip Show tonight where we will try to explain in detail everything you need to know from the past 2 days. Lawdy, lawdy. This house is a madhouse y'all and it's AWESOME!

If you haven't gotten your Live Feeds yet, now is the best time because when Jace goes up on the block... hide yo wife, hide yo kids!