And We Have Fornication... 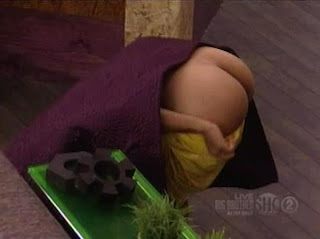 
Yesterday day in the BB house was pretty much yawn worthy, but yesterday night... va va va voom! Bare asses, gay cuddling, finger licking, genital to genital contact. In other words, it was a night BB viewers sit and wait for.

Let's get through all the boring stuff quickly because I know all you perverts really want is the filthy dirty gossip.

They had the Have/Have-Not competition and the Brains lost. Apparently, it was up to Natalie to make the final decision and she claims she chose the Brains because Ronnie is on that team. Chima seemed ok until she'll realized that her birthday is coming up. She's going to bitch to high heaven to be able to eat and drink on her birthday. She also wants extra pillows like the populars got. I really hope BB doesn't give in to her demands because I really hate her. Oh and you, the idiotic viewing public, voted to give the HG's cabbage and wieners. WTF? Why didn't you people vote for the seaweed or the pickled eggs? Cabbage and weiners isn't a punishment!

The new plan in the house is to backdoor Casey and, as a result, Jessie has nominated Michele and Jordan. Oh how the Jeff and Jordan groupies wept! Leprechauns stopped delivering their pots of gold, puppies no longer looked cute, fairies around the world dropped dead, and glitter refused to sparkle. Mass suicides were planned in the BB chats for the fateful day when one of the dynamic duo, Jeff or Jordan, finally leaves the house. Jordan ate away her feelings and stared for hours at clocks. Jeff lied around lazily in a too tight t-shirt driving the menopausal women in the chats into a spontaneous hot flash. Vomit.

I like Jeff and Jordan. I do. I just HATE them in this game. They are the worst BB players I've seen in a long time. If all they wanted to do was lay around making puppy eyes at each other then they should have signed up for The Real World over at MTV. All the alcohol over at MTV might cause Jeff to grow some balls and seal the deal. Here in the BB house he can't even get up the nerve to kiss the poor girl. She'll kiss you back Jeff. I promise.

While Jeff and Jordan refused to do anything remotely interesting, Lydia and Kevin were in another part of the house talking dirty. Alright! Now we're getting somewhere. Lydia tells Kevin that she's given Jessie several hand jobs, but she's NEVER kissed him on the mouth. She's never had sex with him and she's never licked his winky. (Lala does her "I told you so" dance) Kevin eats it all up. Like a typical gay, he loves his gossip and keeps pressing Lydia for more details. She never comments on Little Jessie, but says that he has HUGE balls. LMAO She says the best hand job she gave him was in Natalie's bed in Natalie's clothes. That is so great. I love that. Lydia declares, "I'm all about using sex as a weapon." And with that statement, Lydia is officially back into my good graces. Sex doesn't make you a victim ladies, it gives you power... if you know how to use it right.

Another note about Kevin... I haven't commented too much on him because he's laid low (and smartly so) for the majority of the time. Yesterday I noticed he was talking and strategizing with the Jessie clan and then minutes later he was privy to a strategy conversation from Casey. Like a ton of bricks, it hit me. Kevin has situated himself PERFECTLY in this game. Both sides trust him enough to confide in him. He really has no enemies and no one is really scared of him. That's not easy to do in this game. Most people usually have at least one person who's out to get them. Kevin is sitting pretty for the time being. He contributes to strategy yet manages to to stay out of the line of fire. Not a bad way to play an early BB game. Eventually, he'll have to make some concrete choices, but for now he's definitely free and clear for a secure seat in the jury house.

Casey has no idea that he's the target this week. Sometimes I think he knows something is amiss, but I swear that ever since he shaved his face his personality went down the drain along with his stubble. He's quiet, somber, unfunny, and pretty damn boring. The Casey in the house yesterday isn't the Casey we know and love. I think he's having a really hard time dealing with the fact that Ronnie is back to matriculating in BB society. Casey would rather that Ronnie be locked away in a tiny room of his own to never again see daylight or nourishment. Just knowing Ronnie shares a word with anyone makes Casey uneasy. I genuinely think Casey is scared of Ronnie. He's scared that Ronnie will get back into everyone's head again. My only question is, why doesn't Casey do something about it then? He's trusting the house and their ridiculous Algonquin Round Table plan way too much. Wake up Casey!

That pretty much brings us to After Dark. Showtime viewers were delighted with a game of Truth or Dare. At first all the players (Chima, Russell, Natalie, Michele, Ronnie, Kevin) kept picking Truth and that got real boring real fast. Little Scrappy Doo (Natalie) upped the ante when she accepted a Dare to moon Lydia when she came out of the DR. It was hysterical. Natalie didn't want to show her face at the same time as her ass so she hid the top of her body under a blanket and let her ass hang out the back. Everyone waited in anticipation for Lydia to come out and when she did, Natalie dropped trou and let it all hang out. Lydia walked away unimpressed, but the Truth or Dare crew (and me) were doubled over laughing so hard. Lydia later came out proclaiming she saw Nat's "vag" in that full moon. LOL

Ronnie had to hug Casey for 10 seconds and it was just really really awkward. Casey was grumpy and called them all immature. Then someone dared Kevin to cuddle with Jessie while he was sleeping. They all sneak into the HOH where Jessie is passed out with headphones on. Kevin creeps around the bed and is trying really hard not to laugh while he figures out where to place his hands. Natalie finally has to come in, grab Kevin's hand, and wrap it around Jessie's massive chest. Jessie begins to stir as Natalie proclaims she was trying to stop Kevin from cuddling with him. Again, the house and myself were in hysterics, but Jessie was having none of it. He got really pissed and kicked them out. Party pooper.

Russell had to lick whipped cream off the back of Chima's neck which was kind of hot in a weird way. Russell was into it and gave it his all while Chima sat and giggled maniacally. Chima REALLY wants Russ, but later she said she wouldn't break her 2 year celibacy with someone in the BB house. Then Chima licked honey off of Russell's finger and that was just gross and yucky and made me feel dirty all over. Nothing about Chima is remotely sexy. Russell, on the other hand, is beginning to turn a few heads in the chats. There is a tiny lady contigent that finds him incredibly sexy. I can see how the angry bad boy thing could be a turn on. He's unpredictable and looks like he could flip you around any which way. I kind of get the attraction I guess. His face does nothing for me at all though.

Here's a little clip of the game:

And that brings us to where the magic happens. Lydia and Jessie are in the HOH in another Sex Fort. There is zero movement or noise for the longest time. Then we begin to hear Jessie moan. I know, ewwwwwwww, but moan he does. He asks Lydia if her hand is getting tired. He then says, "Oh right there... yeah..." We then hear some mouth to mouth kissing and Jessie moan some more, "Oh... ohhhh... ahhh" (I'm trying so hard not to laugh as I'm listening and typing this verbatim) We get a lot more, "ah ah yeahhh oh ahh" After what seems like forever Jessie gets up to retrieve a condom and, yes folks, you hear the snap of it being put on.

They switch positions and then you hear a loud moan out of Lydia. She keeps moaning and we hear her say "Fuck me". They kiss a lot and she whispers, "I'm getting wet". I couldn't tell what the hell kind of position they were in, but Simon over at onlinebigbrother.com claims Lydia was on top. Simon never misses a thing so we'll go with that. There are some more small movements and then nothing. Is that it? Jessie! Come on man! Lydia then says she's fine and then that's it. That's the whole sadly short encounter. After it's all done Lydia immediately talks game - which is really weird to me, but whatever.

The clips are coming very shortly. My clip man was sleeping on the job and I had to smack him around a little. He's down in his BB factory as we speak uploading the goodies.

UPDATE!!! A clip has arrived! Sorry for the delay...

HUGE thank you to Shea and Alexis for the clips. They have the best big brother vids over at Clipser so be sure to check them out. Thanks ladies!

Today is the POV competition and we'll see if the big plan to backdoor Casey will come to fruition. If Casey ends up playing and winning, then who knows what will happen? Is Michele on her way out or will Jordan be the ultimate sacrifice?

I'll tweet when the clips are ready.
Posted by Colette Lala at 12:05 PM