The Night Everyone Was Waiting For! 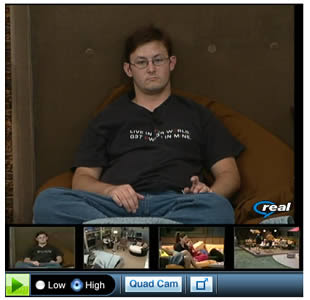 Image via onlinebigbrother.com
Well slap me on the ass and call me stunned. A big turn of events is taking place and it's all thanks to the angry uncontrollable Village People mustached pile of muscles we like to call Russell. Boy can make some waves when he wants to.

First, let's go over what led to the imminent demise of the NBK. Chima started the day bitching about not getting her iron pills. She said that if BB doesn't give her the pills that when Julie asks her how everything is going in the house on Thursday she's going to make a big scene about BB not treating her right. She's also going to complain about that horrible movie THE UGLY TRUTH. It wasn't funny to Chima and how dare BB send her to see an unfunny movie. Who the hell do they think they are? Chima is an unworthy diva. Bitch thinks she's deserves to be treated like royalty when what she really deserves is 5 to 10 at Pelican Bay for a bad attitude.

Ronnie, our resident weasel, went into paranoid mode and spent the day assuring everybody that every move he's made up until now has been in the greater interest of the group. He's been protecting everybody and therefore they should all be protecting him next week. He knows he's fucked up. He knows that come next week he just might be fighting for his life. His mission now is to do a preemptive strike and try to get everyone on his side early. If he can turn some others against each other to boot that's even all the better. Anything to deflect the attention away from him is his modus operandi.

Michele, perhaps realizing that the numbers in her alliance (Laura, Jordan, Jeff) are about to drastically decline, has decided to do a little damage control of her own. She spent a long time in the HOH with Ronnie mending fences and having to tolerate Ronnie's incessant rambling. Ronnie informs her that the only reason he put Jordan on the block as a replacement for Jeff is because it guarantees him Jeff's vote to get out Laura. True Ronnie, but that's not why you did it. You did it because Jordan made you look like an asshole. I don't believe for one second that Michele really wants to make it to the end with Ronnie. I think she's simply telling him what he wants to hear in order to stay off the block for another week.

When it comes to Michele I get very Janet Jackson. I look at her and I just want to say, "What have you done for me lately?" She's NEVER around. I always forget she's even an HG this season. She's stopped dressing up in her hooker outfits so I'm never entertained by her anymore. She is categorically the most boring HG ever. She spent one night talking about butthole pleasures and that made all the boys on the feeds dig her, but it's going to take a lot more than her unusual sexual appetite to win me over. I'd really like to see how she holds up when she's on the block. Does this girl have game or not? I need to see what she's made of.

This brings us to the man of the hour... Russell. I knew getting rid of him too soon would be a big mistake. Yes, he's an egocentric jerk, but he knows how to stir shit up. In the second episode of the CBS show Russell said in the DR that he started the Technotronic fight with Jeff to make Jeff look like an asshole. I didn't really believe him and thought he was just taking unnecessary credit for a fight that we all could see coming a mile away. Now I'm not so sure anymore. Starting fights is Russell's raison d'etre. It's his passion. It's his career. It's what he does best. It could get him very far in this game.

Russell's new mission is to create as much dissension within the house as is humanly possible before Friday. The more fights he can start and not be in the center of, the better the view looks from where he sits. First, he tells Lydia that Casey made a remark about having to carry her and Kevin. Second, he and Lydia discuss how Natalie thinks she can control Jessie. This gets Lydia's goat immediately. She resents how Natalie is always hanging all over Jessie and trying to fight his battles for him. Lydia tells Russell that if she wins HOH that she will not let Natalie use her shower.

Before I continue I need to touch on something that's been bugging me. Live Feeders have taken to calling Natalie filthy and dirty and claiming she never showers. Natalie takes a shower everyday - actually every night in the HOH room if she can. She's not dirty. She's not unhygenic. If you're going to pick on a girl for something at least pick on her for something that's factual. Nothing pisses me off more than people making up lies about someone just because they don't like them. Natalie is in and out of the pool all day. Why in the world would she shower and then go back into chlorine? Everyone needs to get off their high horse and make fun of her for what she really is - an annoying cheerleader that never shuts up.

OK back to Lydia and Russell. Russell set his sights on Lydia probably because she's overly emotional and she's beginning to resent Natalie being a cock blocker when it comes to Lydia and Jessie. Lydia was the perfect target for Russell to attack in order to start shit with Natalie. Well played Russell. Well played. To make sure that Russell's plan works, he also told Jeff that Lydia and Jessie slept together (a complete lie) and that Natalie will be furious when she finds out. Another point for Russell. He's now reeled Jeff in and opened his eyes to how easy it would be to split Jessie and Natalie up.

The funny thing about all of this is that I don't even think Natalie is Russell's true target. I think it's the great and wonderful manbeast Jessie. I think it would give Russell some kind of perverse pleasure to be the architect of Jessie's eviction. Once you cut the head off, the limbs scramble in confusion. Jessie is the head. Natalie, Lydia, Kevin and Chima are the limbs. Russell sees that Lydia is the way to the decapitation. He's bonded with Lydia and complimented her on her prowess. Together they can split up Natalie and Jessie for good.

Meanwhile back at the ranch, Casey is dreaming of mutiny. He wants everyone to rise up from their single beds and revolt against Ronnie. Magellan didn't discover a new way to Europe without a mutiny or two and Casey will never discover peace in the BB house without one either. The head of Casey's beast he needs to destroy is Ronnie. Bless you Casey. May your battle bring you much joy and success.

Well, what about Laura you ask? What is Mine That Bird doing to keep herself safe this week? Oh she's crying. She's crying about missing out on a bikini promoting job this Friday. Damn BB for evicting her on a week when she could have gotten paid! Uh Trigger, you're getting a stipend. Now shut your trap and fight to stay already! She blames the cast and the high school twist for putting her on the block. Honey it wasn't the casts fault. It was your fault. Had you not blown up in Jessie's HOH you would not be in the predicament you're in. Now get yourself together, brush your mane, and get a grip.

Eventually, Laura did make it into Ronnie's HOH and do you know what she did when she got there? She threw Jordan under the bus! She tells Ronnie that she holds no ill will against him and that she's sorry she blew up in the HOH at Jessie. She says it was her time of the month (when it doubt women, blame your period) and she was highly emotional. She goes on to tell Ronnie that keeping Jordan is a mistake and that doesn't everyone realize that Jordan and Jeff are a team. Jordan can't win competitions and protect Ronnie if he needs it, but Laura can. Laura is ready to promise Ronnie that she'll put up Michele and Russell if she gets HOH. That's a good pony Laura. *strokes her coat* That's how you play Big Brother. I'm proud of you. It took you long enough and it may be too little too late, but you gave an effort and I always give credit where credit is due.

Later that night Ronnie tells Natalie, Chima, Lydia and Kevin what Laura said about putting up Michele and Russell. The peanut gallery is having NONE of it. They want Laura out now. Chima claims Laura should have gone up Week 1 and since she didn't, it has to be done now. They all agree on one thing though - they fucked up not putting up Russell as Jeff's replacement. Ronnie knows his ass is gone if Russell wins HOH. He's trying to convince the NBK crew to keep Laura because he thinks Laura will help him out if Russell comes after him. Lydia impressed me a little in the pow wow when she told Ronnie that Laura is a caged animal and will do whatever she has to to stay in the house. Lydia tells Ronnie that Laura insulted his manhood by lying to him about wanting to help him out. HAHA! I love that.

The NBK alliance later further implodes when Lydia, Chima and Kevin dicuss how Ronnie and Russell need to be handled and how Jessie and Natalie need to be split up. Anyone saying that Kevin isn't playing, is just wrong. He's definitely playing. He's just very quiet about it. I think by him keeping to himself and not causing a ruckus will serve him well in the future. It just really bugs me that Kevin and Lydia have teamed up with Chima. Check out this new suballiances plans:

All this drama and fighting and whispering has all been leading to two things.... The Confrontation and The Meltdown. Russell confronts Ronnie and puts him straight. If you only watch a few clips in this post today, make it this one and the third one in the next cluster. Ronnie squirms and it's simply delightful. Russell trashes Laura saying, "Tears do work on guys. Big tits do work on guys." Russell basically negates EVERY SINGLE THING Laura told Ronnie. Laura has NO pull with Russell. Russell is planning on voting Laura out.

Here's what everyone in America has been waiting for... grab some popcorn and a beer and settle in for some fun people... Ronnie is BUSTED in front of everyone. I knew this would happen! I've been saying all week that Ronnie's shenanigans would come back to bite him in the ass. God I can't wait for Thursday! Before I said you could get away with only watching a few of these clips, but forget it. WATCH THEM ALL!!! It's so worth it. Trust me on this one.

The entire house is planning on how to take Ronnie down next week. The Brains are going to throw the HOH competition and Casey's dream of a mutiny will be realized. It's really quite unprecedented how the entire house has come together in a big love fest over their hate of one person. How great is this season I ask you? Seriously, it doesn't get better than this!