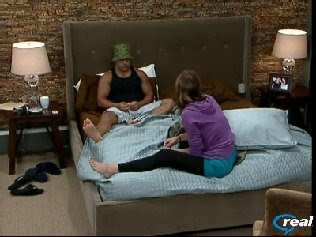 Well, it was bound to happen. I fucked up. I missed something big and neglected to report it. My sincerest apologies. I was shuttling between 2 locations today and didn't have time to do my usual research. Thanks to BB11_Unleashed for the heads up.

There's nothing I hate more than getting something wrong or omitting something big so I'm here to correct it. By the way, in the future if you guys think I've neglected something that's important to the game or see something funny you think I should talk about, do not hesitate to email me or hit me up on Twitter. I'm a one woman production here and, while I try my hardest, it's impossible for me to catch everything.

Last night a very important conversation took place in the HOH between Russell and Michele. They begin by discussing their frustration over Ronnie and his lies. They talk about Ronnie swearing on the bible and how Russell brought him up food when no one would talk to him. Russell admits to having a deal with Ronnie and tells Michele that he has no Final 2 deals with anyone. He knows he's going to have to go against Jessie at some point because he's sure his priorities lie with Natalie. Basically, he has taken Michele into his confidence and welcomed her aboard the alliance train. They are now working together. 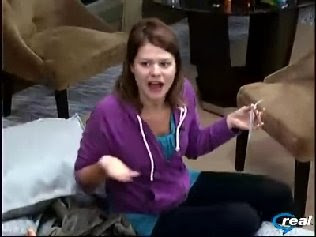 OK so Michele is sitting better than I had originally thought... that doesn't mean I have to like it! There is something that is so shady and so "off" about her that she just rubs me the wrong way. She's very awkward and jittery and unsure of herself and people like that make me nervous. I don't know why. They just do. 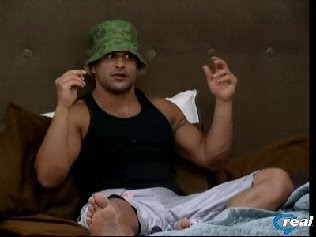 Russell goes on to trash Chima and her flirting. For the record, he does NOT like Chima at all. He thinks her flirting and bragging are obnoxious and she does nothing for him. The next time you see Russell and Chima deep in conversation just know that Russell's inner monologue is probably, "shut up shut up shut up shut up." He goes on to say that the only reason she wanted to host the POV was because she wants to be recognized as someone who's actually worth something. She saw it as an opporrtunity to audition for America as it were.

That brings us to the turning point. Russell confides in Michele that he has bonded and aligned with Jeff. He tells her how Jeff is a stand up guy and they're both Catholic (which is a big deal for some reason) and they're both sick of the lies. I went to an all girls Catholic school and all we did was backstab each other and sleep with each other's boyfriends so the whole "I'm Catholic, you're Catholic" thing really means shit to me. I've said it before and I'll say it again, religion does not belong in the Big Brother house.

Michele says that her goal in the house was to be courted. She wanted to come across as valuable and as a swing vote. Well, I don't know about the valuable part, but she's succeeded on the swing vote thing. It bothers her that people call her the female Ronnie. Russell has no idea what she's talking about and neither do I. Never have I ever thought (or heard) of her referred to as the female Ronnie. OK so I have a theory. I think Michele REALLY wants to be seen as one of the "cool" girls in life. She's not particularly pretty or sexy and she's always gone through life being known for her smarts rather than her looks. I think her telling her weirdo ass licking stories is a way for her to get attention in a world that values beauty over brains. It's one of the things she feels she needs to do to fit in. That whole, "I don't want to be seen as a female Ronnie" was really "Please tell me I'm not as disgusting as he is. Please give me a compliment." Grrrr. The more I type about her the more my ire grows. Maybe it's her shaky voice that bugs me. You can tell a lot by the way a person speaks to you and Michele NEVER speaks with confidence. I couldn't stand sad horsey Laura but at least she spoke with some authority.

So they talk about how pissed Jessie is that Ronnie is on the block. Russell did what Jessie wanted when he was HOH (except for that Casey vote) and now he wants Jessie to do what Russell wants. Michele chimes in saying Jessie bullied her into being in his alliance. That's not exactly true Michele. You went where the numbers were. No one made you do anything.

They both give each other their words and say they'll be loyal to Jeff. Michele says she wants to go out of the house with her dignity and her head held high. OK ass licker, whatever you say. You're covered in dignity.

The conversation literally goes on for hours but I think I've covered everything that's important to the game. Michele, Russell, Jeff, and Jordan are a concrete alliance. Michele ends up telling him that she's really a doctor and Russell goes on to complain more about Chima. They talk a little about Kevin and Lydia and my only concern is that they'll turn their focus to them instead of where it needs to be - on Jessie and Natalie.

Overall I like this new alliance, but I still loathe Michele. If anyone from this new alliance has to end up going home in the near future, I hope it's her. I'm going to keep my eye on her from here on out because I still think she'll not entirely trustworthy. I can very easily see her turning on Russell in the future and if she does, I hope he goes after her the way he went after Ronnie. I can also see her turning on Jeff and Jordan. She's pledged her loyalty to them, but she keeps talking about them behind their back and that strikes me as very curious