Ding Dong The Bitch Is Gone 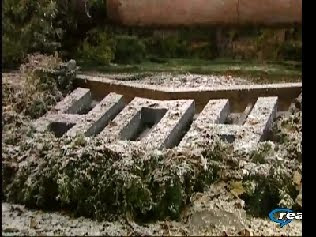 Do you hear that? It's very faint, but it's there. It's beautiful. It's majestic. It's the sound of a Michele free BB house! The clouds have parted, a rainbow has shot across across the sky, Mr. O'Shaugnessy and his friends are busy putting out pots of gold, and the choir of angels are singing "Smooth Criminal". They're really into it this time. They're totally grabbing their crotches and shouting, "Shamon!". Awwww... Mr. O'Shaugnessy is doing the moonwalk! It's precious. He had a very busy night last night and he's all about celebrating today. My little man has a Twitter account now and the little bastard got over 20 followers faster than I ever did. While I'm not exactly thrilled he's tweeting Martha Stewart, it's nice to know he's so well liked. If you'd like to hear the innermost thoughts of an angry horny leprechaun you can follow him at @Mr_OShaugnessy (http://twitter.com/Mr_OShaugnessy).

OK so let's talk about that live show last night. Michele sucks. The end. Seriously though, she's so bloody awkward and those stupid devil horns were just moronic. She's not charismatic enough to pull off humor during a broadcast. While I know I said I wouldn't mind if she stayed simply to give me something to write about, I'm thrilled the bitch is gone. How funny was it when the Ragamuffin said Michele played a dirty game? AHAHAHA!!! My hypocradar was beeping loud and clear, but it was still funny as hell. The Ragamuffin has no shame and while I'm not surprised she insulted Michele in her goodbye message; I thought it was a bad move on her part. Kevin's goodbye message was good. He complimented Michele by saying how strong she was, but he was also honest when he said he didn't know whether or not he could trust her. It was classy, funny, and smart. If I were giving a goodbye speech to a juror, I'd do exactly what Kevin did not what Natalie did.

I actually liked that POV comp. How funny is the idiot music they always play for Jordan now? She truly is a moron. I don't want anyone anywhere ever telling me she's smart. I'll throw a rotten tomato in your face and kick you in your shins if you say that shit to me. Chili Cheese Fries Chelsea has already used up all of her brain power for the summer. She's got none left and what we're left with is a doughy sticky chocolatey blonde shell of a woman. Someone in the chats yesterday mentioned that she'll procreate eventually. I pray she marries a genius and those children are sent away to proper boarding schools. Those kids will need intensive expensive private tutoring - something offered by rigid Swiss nuns with a ruler or a switch in their hands. 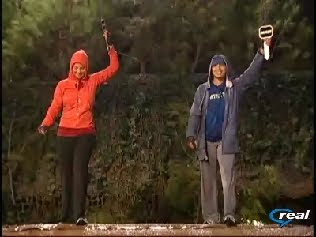 Moving on... I'll be honest I didn't expect the HOH to go on very long at all, but those bitches surprised me and ended up going for almost 5 hours. The concept was simple: Stay on the log and don't let go of your key. Everyone was happy and smiley when it started and once again the Ragamuffin ran her mouth. The bitch would not shut up as she yammered on and on about the most inane things. She tells Kevin how Julie asked her about loyalty in her interview and you could tell Kevin just wanted her to shut up so he could focus and concentrate. Then Ragamuffin brings up how this endurance is much better than the Graduation Day one. She talks about how everyone was vomitting during the last comp and, I'll be honest, I had to mute her for a little bit.

Occasionally, leaves would start blowing and rain would start falling. I thought they'd slip on that log for sure, but they were all troopers and they kept on going. Jordan suggested they all sing 1000 Bottles Of Beer On The Wall. Oh shut the fuck up Jordan! You've only been in the house for ohhhh I don't know... 9 weeks now and you're still not aware of the 'No Singing' rule? Fucking idiot. So yeah the feeds went down and BB had to yell at her. When the feeds came back Fried Rice Fanny announced she was hungry and began to talk about pizza. 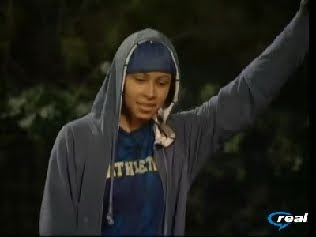 Ragamuffin kept on running her mouth only this time she was talking about Jeff. She told Jordan how happy Michele must be now that she's going to have him all to herself. AHAHAHA!!! I'm sorry, but that's hysterical. It's funny because, in a way, she's 100% right, but, at the same time, she's fucking evil. Jordan kind of scoffs at her and Ragamuffin continues, "Michele was so jealous of you Jordan." Jordan calls her a little instigator and laughs. Ragamuffin says Michele will probably try to kiss Jeff now and I just sat back and laughed and laughed. Ragamuffin is on a roll at this point and she begins to talk about how Michele is lucky Julie didn't ask Ragamuffin to make a speech about the new nominee. Ragamuffin says she probably would have gone off on her, but she's not sure. Michele was kind of decent to her last night so maybe Ragamuffin wouldn't have humiliated her after all. 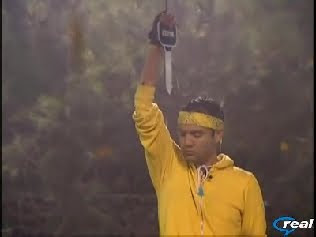 All of a sudden the log comes to a complete stop and they all almost fall. Up until this point it had been constantly moving. Kevin jokes, "Please tell me the bitch broke." LOL

The log wasn't broken at all. This time it started moving backwards. All the HG's were soaking wet at this point and their pants were all sagging - especially Jordan's. All of the chat hags began screaming for Jordan to pull her pants up... like she can hear them. Then a cheerleader faction emerged and they kept typing "Go Jordan!" over and over again. Typically, I find cheerleaders entertaining (come on, you know you love the ESPN competitions too), but a bunch of menopausal women popping correctol and estrogen cheering Jordan on to a win is just annoying. 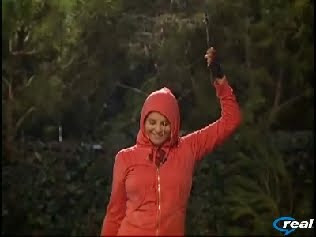 Ragamuffin started flapping her gums again saying, "This is a Russell competition right here... and Jeff. This is a Russell and Jeff." Jordan chimes in and says that if Russell and Jeff were there she'd just quit. Well, that's annoying isn't it? It kind of turned me off of Jordan even more. Up until now I'd been impressed with her determination in this HOH comp, but it bugs me to no end how she says if anyone strong was around, she wouldn't even bother trying. 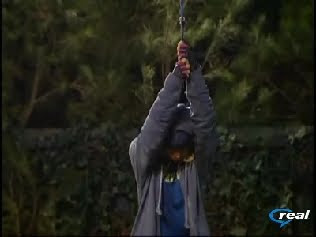 After that Natalie began sneezing constantly. It must have been contagious because Kevin started sneezing shortly thereafter. 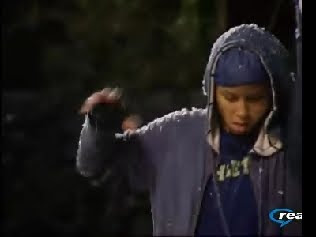 Ragamuffin's hands began to bother her and she kept shaking them out trying to get the blood circulating. 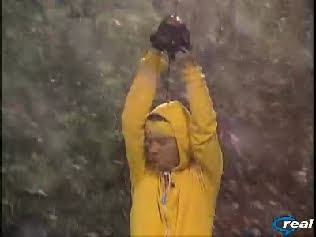 Then the fun really began. Sleet and snow began blowing right into their faces! Ragmuffin says, "This is easier than Graduation Day!" and Mr. O'Shaugnessy punched himself in the face. He REALLY can't stand her and last night she was particularly annoying. 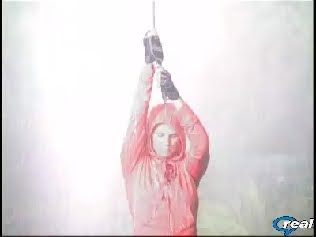 After the sleet and snow, the lightening kicked in. Do you have any idea how hard it was for me to get that screenshot? How beautiful is that? It was timed perfectly. The lightening was super bright and the HG's had to close their eyes. I would love to be the person running the effects button during this comp. I'd be blinding them constanly, blowing snow and hail in their faces, and making the log go super fast just to see what happened. Someone may die, but who cares? It's all in good fun. 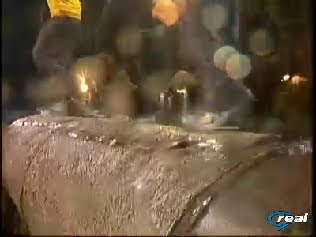 Someone must have been reading my mind because the log started to spin faster. It would go forward, stop quick, go back, stop quick... forward, back, forward, back, stop, go, back, forward. It was really cool actually to watch their feet. Ragamuffin was literally hopping and skipping every time the log would go backwards fast. I totally thought BB wanted someone to fall before BBAD started, but no dice. Those bitches kept hanging on.


Ragmuffin tried to psych everyone out by telling them they might as well fall because she'll be up there all night. Kevin told her he'll be there until the sun came up. He even had a protein bar in his pocket. He ate half and said he'll save the other half for breakfast. They remained on the logs without incident for another 90 minutes. Then it happened... the log started without warning... 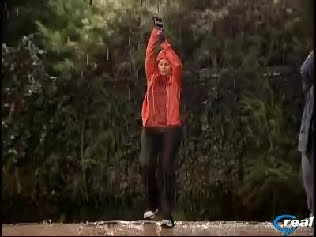 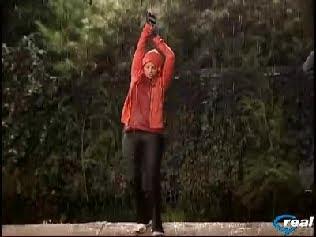 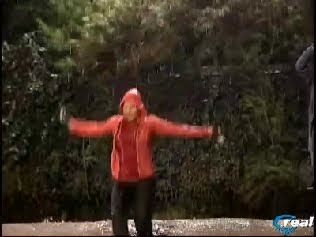 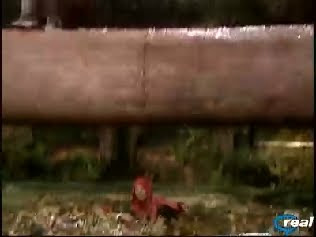 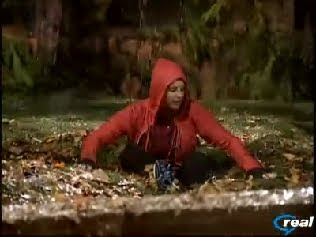 Jordan became the first casualty. The fall didn't hurt her at all and Ragamuffin advised her to get some towels. Thanks Einstein. Ragamuffin tried really hard not to burst into a huge smile and Kevin says, "It's down to you and me now wench!" Jordan headed inside and Kevin says, "There better not be pizza up in that bitch."

Jordan goes inside and Ragamuffin and Kevin begin to talk. Ragamuffin says she'll wait 5 more minutes if Kevin swears on his life he'll take her to Final 2. He tells her if he wanted to get rid of her he would have kept Michele. Ragamuffin says, "Alright. 5 minutes." Then she says tomorrow is a crap shoot and Jordan could win it. Kevin says, "Bitch can't win anything!" Again, Kevin swears on everything including his man. Ragamuffin says she'll wait 15 minutes. Kevin tells her to make it 10 because his testicles have shrivelled up into his abdomen. Ragamuffin keeps whining, "If you burn me dude.... this is mine to win... who knows what tomorrow will be... I trust you... this is proving to you my loyalty... blah blah blah." Kevin says, "Bitch don't make me go over there and karate chop you!" They agree Ragmuffin needs to fall before Jordan comes back out. 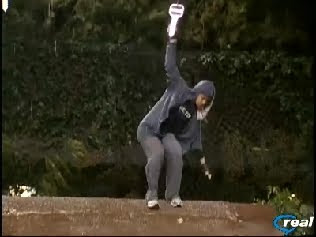 The snow starts up again and, for some reason, the feeds go down. They come back and it's lightening and raining with both HG's still holding on. Eventually, it all dies down and the log stops. Jordan goes back inside and Ragamuffin turns to Kevin and says, "Final 2?" He says yes and she jumps down. I'm a little stunned she kept her word. I'm not sure how to deal with an honest Ragamuffin. 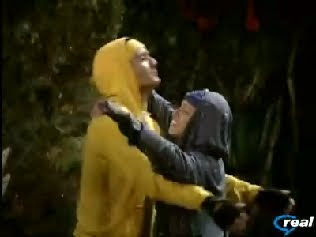 Kevin gingerly walks off the log and Ragamuffin keeps yelling, "Just jump off! Don't be a pansy!" He gets down and they embrace in victory. The night ends with showers and food.


So there you have it. Kevin won Part 1. Today we'll have Part 2 and tomorrow will be Part 3 during the live show.

A good friend of the blog, Grimace, has asked me to ask all of you good people to vote for him in a little contest he's involved in. Click on this link http://www.tardies09.weebly.com/ and type the name 'Grimace' at the bottom. He's told me to tell you all "A vote for Grimace is a vote for Leprechaun induced orgasms EVERYWHERE." How can you deny him victory?