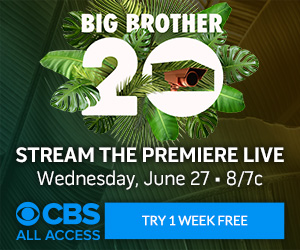 Remember, the only way to see the Cast Reveal is on CBS ALL ACCESS. Sign up today by clicking any of the banners in this post for a free trial!

Plus, stay tuned because there is one more secret surprise, several weeks in the making, that I can't wait to tell you about!

Posted by Colette Lala at 5:31 AM No comments:

Do you feel it? The tingling in your loins, the pitter patter in your chest. You guys, it's the first ever CELEBRITY BIG BROTHER!!! I don't know about you, but I am beyond thrilled. The cast has been revealed, the Roku is ready and the Big Brother Gossip Show is preparing for our pre-season episode. To get you ready for this momentous occasion, here are some important dates you need to know:

As you can see, we'll be getting four episodes a week. It's a short season, but who cares? It's a celebrity edition! It's a bonus season! This is all good news. I, for one, can't wait.


Don't miss one second of the action!