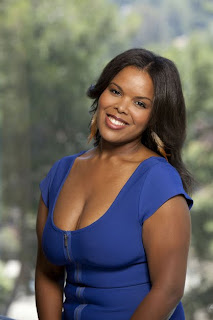 Kalia Booker is a 30 year old writer from Philadelphia, Pennsylvania who belched in a P.A.'s face right before her interview started. Why she belched, I do not know. Maybe she was hitting up the craft services table a little too hard before her shoot began. Or, maybe she just didn't care for the P.A. adjusting her mic. All I know is she's wearing feathers in her ears and she might be a voodoo princess. In my mind, she sacrificed a chicken the morning of the interview for good BB mojo so we'll go ahead and run with that angle and see where it takes us.

Kalia is a long time Big Brother fan and insists that no other black girl on the show was ever as cute or as young or as vivacious as she is. *sigh* Really? You're pulling the race card out now? You couldn't wait at least a week or so to do that?

Kalia is a brow furrower as well, but what she brings to the table (that Dominic doesn't) is a wonderfully sassy neck twitch. Back and forth, back and forth, side to side. It's says "Oh no you di-in't!" and "Bitch, you crazy!" all at the same time. As long as she doesn't do the Jameeka hand clapping thing we might get along famously. I kind of like her, "There's no other girl like me" confidence. I say that very same thing to my mirror everyday.

And, let's be honest here, I think the word "Kalia" is Sanskrit for "Drama". If there's one thing I'm sure about, it's that Kalia probably won't let anyone push her around. I'm pegging her for a fighter. Had she shown up in a past season, I probably wouldn't have liked her right off the bat, but I've grown bitches. I've learned. Big personalities are live feed gold. We may dislike them, we may want to take their red extensions and flush them down the toilet, but big personalities are what keep us watching. Kalia may turn out to be horribly wretched or incredibly gaseous (she keeps talking about farts!), but I don't think she'll be boring and that's all I really care about anymore.

Look for Kalia to absolutely 100% throw the first HOH competition. She'll try to be subtle about it, but she'll definitely throw it. She thinks winning the first HOH will put a huge target on her back and she's looking at the bigger picture rather than the short game. This vegetarian is all about the money and she's not afraid to admit it. No in-house romances for her. Although, she will eat meat if she has to. Double entendre intended.

Let's see how she answers the fan questions:

So, what do you guys think? She's kind of evil, right? Lots of potential here. I have a feeling the BB fanbase will be very divided on this one. Comment it out and let me know which side of the fence you're on.

If you haven't gotten your feeds yet, please support this here little blog by clicking below.