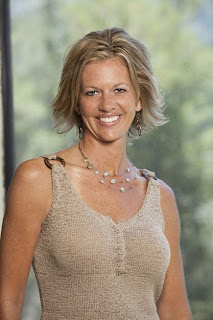 Last one! Shelly Moore is a 41 year old Corporate Executive from Baton Rouge, Louisiana. She's incredibly tan and likes to talk a lot with her hands. I think I'll refer to her hair as a "coif" - it's a Meg Ryan coif. Nothing wrong with that. Ms. Shelly loves herself some Big Brother and it's sort of precious the way her eyes light up when talking about the show. On my gut instinct, I like her. She puts her whole body into whatever she's saying and she's got a nice throaty voice with a southern drawl - I wonder if she's a smoker.

Shelly's got a big personality and I'll bet she's one of those people who approaches life with excitement and fervor. She's what I might call a "tough broad". There's not much for me to pick on here. I mean, she seems like a nice lady. I dig her enthusiasm. My only real concern is who she teams up with. We've all heard the rumors and let's just say I can see her teaming up with a certain duo and then never leaving their side for the rest of the game. That would be a tragedy for Shelly... at least on this blog it would be. I don't play fair. I will judge you for who you team up with. It's part of my charm.

My hopes for Shelly is that she plays her own game and doesn't fall for the rusty remnants of star power she'll be confronted with. Only time will tell...

Let's check out her CBS video:


What do you guys think? She's definitely not bland. I think there's something there. Do you agree? Disagree? Comment it out bitches and have a great day!

Thanks to everyone who's been supporting this blog. Every click helps. You guys rock my world.