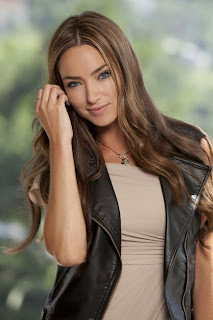 Next up is Cassi Colvin. She's a 26 year old model from Nashville and will tell you straight up, with no problem at all, that she's a recruit. She's never seen Big Brother before, but after having watched a few seasons she was immediately sucked into the black hole that I'm currently flailing around in. It's a lot like trying to swim through a vat of molasses. Your hair sticks to your eyeballs and, inevitably, your pants come off.

Her accent is thick, but I don't mind it so much. I like her confidence and poise. And, any opportunity for me to type things like, "Ahm jess lookin' ta hayevv a good tahm een tha howse an' meet sum new paypull" is always good fun. Now I know why Rooster Ralph (Survivor: Redemption Island) was put on this Earth - to train me for Big Brother 13.

Cassi is a beautiful girl - there's no doubting that - but she says that she doesn't care for judgmental people. Well, excuuuuuuse me! Judgmental people are what makes the world go round girlfriend. Judgmental people put those pennies in my PayPal account I'll have you know. When you're pretty, you're judged. Bitches get jealous, they key your car, they slip in insults when they want you to think they're complimenting you. That'll never change honeypie. Just get used to it and give the haters the finger.

When asked about the possibilty of a showmance, Cassi became a little tongue tied. She doesn't plan on having one - which is what they all say - but she also doesn't know what she's looking for in a man. Call me crazy (or just wishful), but I'm thinking "closeted lesbian". Oh please please, pretty please, let Cassi be gay. There's nothing I love more than a hot chick with zero interest in the douchebags hitting on her and who instead secretly lusts after the girl in the next bed. Lesbians are great fun and I want one on Big Brother dammit. We always get our token gay man, but we really need a fun sexy lesbian to mix things up. She's probably straight as an arrow, but I'll keep my fingers crossed for a late night coming out of the closet moment.

Cassi doesn't give us many clues about her strategy and I'm ok with that. It's always so silly to me when people overplan and plot elaborate lies before even knowing who they're playing with or what the twist is. She doesn't strike me as a windowlicker and I think she'll pick up her own strategy fairly quickly once the game starts. There's not much for me to dislike Cassie for yet. Her favorite word is "shit" and she seems comfortable in front of the camera. I'm also not getting a famewhore vibe at all. Then again, I completely misjudged Rachel last year and will never live that down so, who knows?

There is, however, a potential for boredom here. I can't tell if she'll be evil and crafty in the house or if she'll float her way through the game with nonconfrontation. It's going to be a waiting game with Cassi, but upon first impressions, she doesn't bug me... yet.

So, what do you guys think of Miss Cassi? Are we sensing any bitch potential here? How do you think she'll get along with the returning Houseguests? I don't know about you, but I think Cassi is my ticket to a certain rancid hosebeast being taken down a few notches. Comment it out bitches and let me know if we're on the same wavelength.

Don't forget to get your Live Feeds! This season just got a hell of a lot more interesting.