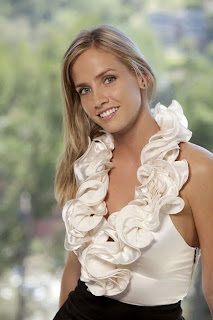 Porsche Briggs is a 23 year old cocktail waitress from Florida and is, for some reason, named after a car. I can't take her seriously when all I'm wondering is "Did her parents name her that? Is she considering a career in porn?" I'm going to be really honest here, I'm watching her video and hoping that those ruffles on her shirt come to life and strangle her. I'd like little tiny yellowing claws to jut out of that blouse and pierce her jugular. Just a nick. That's all I need. Just one really quick swipe and then she'll be out of my life forever.

Look, I don't care who she's friends with or what movie star she's dated, I don't like her. Maybe it's because she's following the scrumptious Lawon or maybe it's because she seems really really fucking boring. If you say Daniele Donato is your favorite Houseguest, I simply have to assume you're just not very bright. Daniele Donato was a whiny little snot who gave us nothing but booty shorts and Uggs.

It's not all a lost cause for Miss Chevrolet though. She could team up with some of the people I'm rooting for or possibly get rid of some of the unsavory returning characters I hate. That would win her some points with me, but on first impressions - eh. I'm not feeling it at all. Nothing sparkles here. Nothing stands out. She's cute, but that's not enough.

I kind of want to cruise (car joke intended) through this one and move on:


What do you guys think? Does anything about her personality seem exciting? She could get into some fights I suppose. I guess I can see that happening. I just can't shake that "insufferable" vibe I'm getting from her. Fingers crossed she doesn't hook up with Lawon. Comment it out and let me know what you think.

No more lagging. Just get the feeds already dammit!