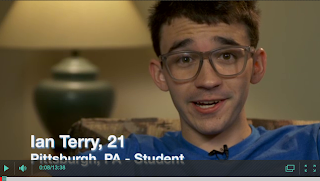 Just look at that photo. Look at how his eyebrows all at once pierce the sky yet at the same time hide in shame. Bless his wiggedy whack haircut. This, my friends, is 21 year old Ian Terry from Pittsburgh, PA. Ian is a student at Tulane University and an avid rider of bikes. A grueling bike ride is good for the soul, Ian insists. Naturally, this is what I assume he rides based on looks alone: 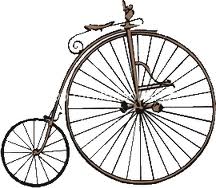 Reading his bio, I'm almost picking up on a Cochran vibe (Survivor). He has a very specific plan for Big Brother which includes joining an alliance of six yet being only the 4th strongest in that alliance. Strongest at what? Coffee drinking? Knitted cap wearing? Comic book reading? Figurine playing?

Ian is scared of deadly animals (because they're dangerous) and vomiting (because it's painful). There's something simple yet complicated about the lad, isn't there? His life's motto is to "kick butt and chew bubblegum" and, like Elton John, he collects eyeglasses. *shouts "Sing Tiny Dancer!"*

Let's see if he's adorable or creepy. Please to enjoy:

Right off I'm going to say thank you to Ian for looking directly at me while speaking during the opening. "My name is Ian. I'm 21. I go to Tulane University and these are my kidnappers. They've been treating me well and giving me plenty to eat. Mom, dad, I love you. OK, you can continue your interview now." This isn't the jungles of Venezuela Ian. Although, hold today's newspaper up to your face so I know you're still alive.

Shifty-eyed and insecure, Ian is likable in that geeky underdog way. You want to root for him because he sleeps with a humidifier and has a million stomach ulcers (I completely made that up), but you probably shouldn't root for him because I can envision him being carried through the game. He's a follower rather than a leader and I suspect his need to be accepted will get in the way of making moves that are the best to further his own game. Although I LOVE that he thinks he'll find romance. Good for you Ian! Why not, right?

An all around likable guy, but I'm not predicting any magic here. Unfortunately, he's not as "Cochran" as I had hoped.  What do you guys think? Will Ian melt your heart or bore you to tears?