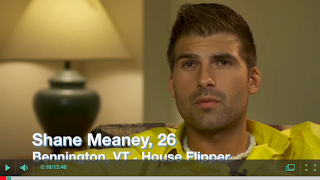 We're pulling into the final stretch bitches! Looking back over what we have so far, I'm worried. I'm really freaking worried. For the most part, this is a vanilla cast with lackluster first impressions. Can Shane be the answer to our prayers? Let's see.

Shane Meaney (that last name is SO promising) is a 26 year old House Flipper from Bennington, Vermont. He has ridiculous hair, but I'm so desperate for someone juicy that I'll overlook it. Shane describes himself as passionate and funny. He enjoys hitting golf balls off of his deck and of course I have to ask: Golf balls filled with blood? Little Satanic orbs of evil hurling into his neighbors windows? Right? RIGHT?!

Did any of you see Magic Mike - (GO SEE IT)? Shane reminds me of Mike with all of his weirdo entrepreneur schemes. Listen up people, just because you have like 50 different jobs it doesn't make you an entrepreneur. It makes you someone who can't work for the Man so you invent a bunch of different titles to make yourself sound cooler than "self employed". Nothing wrong with that. I'm not hating. For example, Mike was incredibly charming - especially when he was humping the floor and smooshing his junk in girls' faces, but I digress.

I'm having a hard time taking Mr. Vermont seriously with his arm slung across the couch like that. He's a little too nonchalant for my taste. A little scattered. Eyes flitting around the room and whatnot. I hope he packed his Adderall.

BZZZZ! Gank! Scrod! Did he just say "I want the girls of America to want to be with me and the guys to want to be me"? Oh hell no. *stamps DOUCHE on Shane's stupid hair* Sorry Shane. You would have been so much cooler if you were a Satanic gang member who played golf with bloody balls. You're such a disappointment!

What do you guys think of Shane? Wouldn't he have been so much more appealing if cooking meth was at least one of his many jobs?