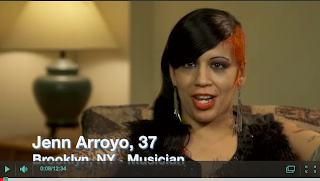 This is 37 year old Jenn Arroyo. She is from Brooklyn, NY and used to play bass in a femal metal group called "Kittie". She likes to lift weights, crush skulls, and snort coke off of newborn babies head. Alright, so I might have made up the part about lifting weights.

Jenn also enjoys journaling and turning her stream of conscious ramblings into hardcore hair flipping anthems. She has no real plan as far as the game goes and is more of a fly by the seat of her pants type of a gal. She'll just go in the house, be herself and let the other Housguests frolic into the complicated labyrinth that is she. If they like what they find, great. If not, she'll bite their heads off and use their upside down skulls as flower pots.

If Big Brother makes her famous, she'll record a full length album and go back out on the road. The dusty road of dank motels, late night diners, and sticky beer covered floors of battered hole in the wall clubs run by a 50 year old aging metalhead named Jimmy whose one great love in life is his tropical fish and taking underage girls out for a spin on his Harley after the last customer leaves for the night in a close second. Or so I've heard.

As someone who is drawn to the eccentric and barfs at anything cookie cutter, I'm ready to like Jenn right off the bat. Let's see if she's as bad ass as I'm hoping she is. Please to enjoy:

First off, I loooove that she's not a hardcore fan. In recent years hardcore fans have made the worst players. They're too aware of us watching them on the Live Feeds. They're too rigid in their plans. It's no wonder she's going in and, for the most part, letting whatever happens happen. She's not too naive though that she doesn't understand the importance of an alliance and I think her age will work in her favor as far as sniffing out the other players' authenticity. 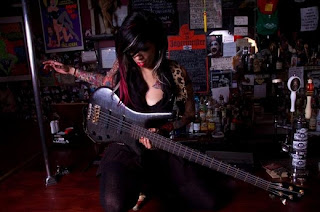 America's new sweetheart rocker lesbian with a heart of gold! Confident and no nonsense, Jenn is my early favorite. I like everything about her and I'll like her even more when she trashes the kitchen and threatens to shove those green plastic chopsticks up someone's nose. It'll be very Watts in Some Kind Of Wonderful.

What do you guys think? Are you ready to take a walk on the wild side?