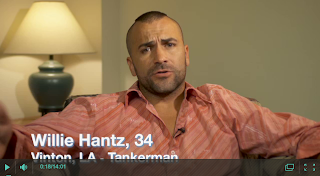 Meet 34 year old Willie Hantz of the infamous Texas Hantzes. The Hantzes are very much like cockroaches. In the case of a nuclear attack, only they will survive. Parts of them might be melted off, but their characteristic I'M A HATZ tattoos will identify them through the nuclear winter. Yes, it's HATZ. The Hantzes may be everywhere these days, but that doesn't mean they can spell.

Willie describes himself as serious, hostile and docile. His favorite activities are gambling and strip clubs. His life motto is... wait a tic, did he just say "gambling and strip clubs"? *glitter falls from the sky* I'm beginning to like this Willie character. And if I keep on reading his CBS.com bio I'll discover that he wants to take cigarettes and vodka into the house. It's a Christmas miracle!

Willie would have turned to suicide were he to be in the house with Rachel. A quick and painless shot to the head with his 9 and the red-headed nightmare would be erased. I have a feeling he would have preferred to kill Rachel instead of himself, but you probably can't put that in a network questionnaire. 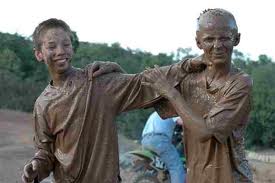 There is a softer side to Willie though. His kids are what he's most proud of and I suspect we'll see them on the next season of Swamp People. Rambunctious little rugrats covered in mud and slime shooting the neighborhood dogs and cats for the family supper. Willie tries to discipline them with a strap and a bear trap, but they're faster than he is. Plus there's a dead 'coon in the trap right now and the missus forgot to clean in out.

So yeah, that's Willie. Let's check out how he is in person. Please to enjoy:

Willie may not be the brightest bulb there ever was, but he's confident and charismatic and I won't begrudge him that. He's immediately more likable than his brother and you know I appreciate someone who hopes the entire house hates each other. (That's all I've ever wanted!)

"I'll vote off my mama first."

*prepares, inhales, raises arms above head... and DIVES!* Ohhh it feels sooo good on my skin. Oh yeahhhh... *does the backstroke and blows little poofs of glitter off of each hand* Poof! Poof!

Willie doesn't care for how Adam played the game and neither did I! (Note: Adam is actually a really great sport and didn't get mad at anything I said about him last season. Can you believe it?!? Either he's super super nice or mentally ill.) It's interesting what Willie has to say about Britney thinking she's better than everyone else because I kind of agree. I liked Britney and she made me laugh at times, but I was never gaga over her. She's not someone I pine to see more of - let's just put it that way.

I'm very excited that Willie wants to manipulate the way people think. I've always thought psychological warfare was woefully neglected in Big Brother. Matt (BB12) played with it a little bit, but the last great attempt has to be Kevin and Natalie's BB11 lies. I loved those! The more I watch Willie, the more I like him. He might be what saves this vanilla cast from falling into a BB13 slump. (I HATED BB13!) He'll stir up the house into a bubbly concoction of festering evil. I don't see how anyone can hide and be boring with Willie poking sticks at their lifeless bodies.

So what do you guys think of Willie? Does the Hantz thing bother you or do you not care?

And that'll do it for the cast write ups! Big thanks to Big Brother Network for making these videos available to everyone. You can check out even more interviews over at SuperPass, but you can't see them unless you sign up for the Live Feeds! The Early Bird Special is winding down and there's never a better time than now to join in the fun. Plus, there's an episode of Rumor Control today with Rachel and Janelle - that should be interesting.

Thank you so much to everyone who has gotten their Live Feeds from my little dog and pony show here. I'm a small site, but I pack a pretty big punch. And, believe me, I plan on punching a LOT of people this summer. Fun!