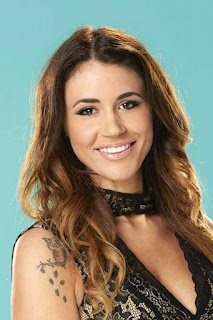 Last one! This here is 32 year old High School Teacher Tiffany Rousso. If that last name rings a bell, I have two words for you: Medication Time! Yup, this is Vanessa's sister. Glancing over Tiffany's CBS.com profile I notice that she is incredibly succinct. She's quick to the point. Three words to describe herself: passionate, smart, and sincere. Hobbies: playing basketball, wakeboarding, paddle boarding, painting, singing, and playing guitar. Life's motto: "Live with urgency!" Boom. Done. She is not like her sister at all. Had Vanessa filled out the same questionnaire, it would have to be downloaded in the form of an e-book, published in 16 parts, and littered with footnotes. Perhaps Tiffany won't have to see Nurse Ratched every morning like her sister did. Perhaps Tiffany doesn't have two entirely different personalities (pre-med and post-med). Perhaps Tiffany won't drive us all batshit crazy. Perhaps. 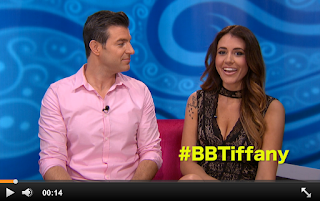 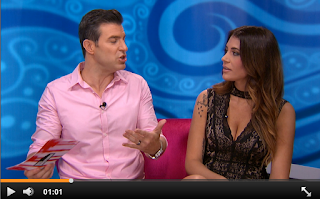 Right out of the gate we notice that Tiffany is calm. She does sound a bit like her sister and her mouth and neck have distinct Rousso traits, but she seems lovely. Jerf, on the other hand, is a giant tool. He asks Tiffany what her favorite Big Brother seasons are and she replies, "10,12, and 13." Jerf is all, "But I'm fishing for something!" Tiffany replies, "Well, it's hard to pinpoint one favorite season. They are so many different characters that stand out." Jerf thinks she's trying to compliment him for some reason so he thanks her by slapping her with his index card. Finally, he switches tactics, "Who do you KNOW in Big Brother?" What happens next is interesting. Tiffany immediately becomes visibly uncomfortable. Jerf reassures her that no other Houseguests will see this interview. 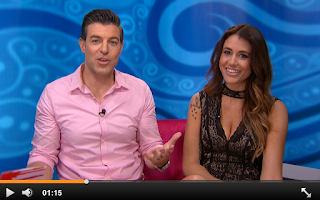 After a pause, Tiffany is either playing dumb or is genuinely confused. She asks Jerf, "You want to know who I know? Like who I've met?" What game is she playing here? WE CAN SEE YOUR LAST NAME. Finally, she says that she's met a lot of people from last season because her sister is Vanessa Rousso. Jesus Christ, that was weird. I still can't figure out if she's slow and moronic or trying to be covert. 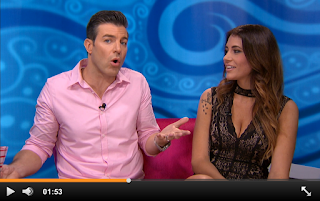 Now that she has admitted that she is related to Vanessa, we need to know how she plans on dealing with that information. She says she's not going to come out and say it, but if someone confronts her about it, she won't lie. Jerf, however, thinks that the Houseguests might be able to suss Tiffany out because she and Vanessa have similar man-yer-isms. Manyerisms. *sigh*

When it comes to playing the game, Tiffany hopes to be far less emotional than her whack job sister. While Vanessa was indeed emotional, Tiffany thinks that she played one of the best games ever in Big Brother history. We all have our issues with Vanessa's game play and her personality, but I won't disagree with that statement. Vanessa was indeed a master manipulator. We may not have liked her crying, hissy fits, lies, and psycho babble, but the bitch got shit done when she needed to and she was an integral part as to why last season was so fucking fantastic. No one wants a nice normal sane person in the house. What fun is there in that?!

Tiffany acknowledges that she is incredibly competitive so throwing competitions could be difficult for her - even if it is in her best interest to do so. She hopes to lay low for the first few weeks (Boo!) and not win too much - especially the first HOH. 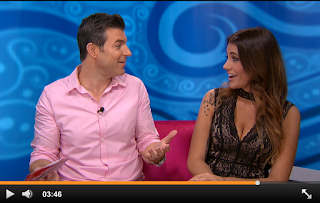 This next part may seem innocuous, but I think it explains a lot about Miss Tiffany. Jerf asks her what her greatest life accomplishments are. Tiffany says that last year she started a new SAT Prep business. Jerf says, "I took that!" Obviously, he's talking about SAT Prep in general. I mean, we all took the Princeton Review. That's what he's talking about. But Tiffany thinks he's referring to her specific class - the class that she teaches - the business she just started. Only when Jerf explains to her that he took an SAT Prep class when he was in high school does she realize what he's talking about. Why do I point this out? Well, remember earlier when Jerf was asking her who she knows in Big Brother and Tiffany was like, "You want to know who I've met?" I think she has a hard time understanding jokes, sarcasm, innuendo, etc. She's incredibly literal. I don't think she's on the "spectrum," but she does that thing that autistic kids do - where they take everything at face value. In Tiffany's case, I think she either doesn't have much of a sense of humor or isn't very bright. Since she's a teacher and now has an educational business, let's hope for everyone's sake that it's not the latter.

Just as I was ready to wrap up this post, Jerf asks Tiffany if she wins the $500,000, will she dangle it over her sister. Tiffany asks him, "What do you mean dangle?"