Next up is 29 yr. old Event Coordinator Brittany Martinez. Brittany hails from Southern California which means she smells of that musky sweat-scented perfume, Recruit, by one Robyn Kass. Lots of jock strap top notes in that bouquet, let me tell ya. Anyhow, Brittany has 3 children. Considering she's only 29, I'm assuming her children are quite young. I always chuckle to myself when the mothers run away from their families to spend a summer on reality TV. It's as if Big Brother is one long Calgon moment for them. 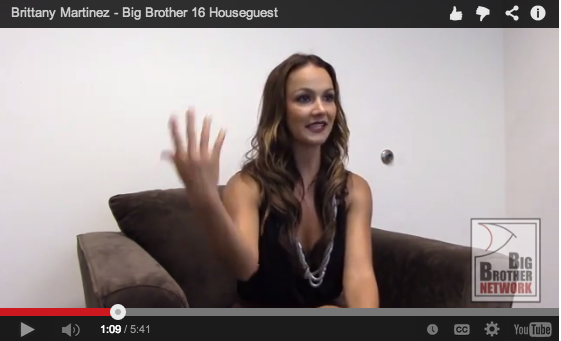 And, yup, I was right. I pressed play again on her video only to discover that she was indeed recruited just two weeks ago. Two weeks ago? Isn't that cutting it awfully close? Even stranger is how she says she was out for a drink with her girlfriends when some people at the next table overheard them talking and "got good vibes" from them. Was she talking about evicting one of her kids? Does her Baby Daddy's cooking taste like slop? When I hear stuff like this, it not only makes me incredibly nervous but it sort of explains the laziness of Big Brother over the past few years. I mean, how long has it been since we've had new Challenges? If the powers that be are still casting only days before sequester, you have to scratch your head and ask yourself what the hell they've been doing all year long.

Furthermore, Brittany has never watched a single episode of Big Brother, but she has been catching up on past seasons while in sequester and she is well aware that it's "not all fun and games." She also admits that, mentally, the game will break her down. I'm a little surprised to hear her say that as she appears incredibly confident and poised. She's far more mature than her 29 years which can probably be attributed to the fact that she became a mother at such a young age. She looks directly at Matt when speaking and is very at ease on camera which is the complete antithesis of Amber, whom we met earlier, who has zero charisma and fidgets a lot.

When asked what she'll bring to the house that makes her different, Brittany replies that she is both a ball of fun and a ball of fire. I'm inclined to believe her on the "ball of fire" part as she comes across incredibly no nonsense and straightforward. She is so at ease in front of the camera that I wouldn't be surprised if she majored in Broadcast Journalism or competed in pageants.

Unlike Amber, who has one of those wretched fly below the radar and never win a comp plans, Brittany opts to give it her all and try to win competitions. Good for you, Brittany! That's what we like to hear. If she has any physical prowess whatsoever, Brittany could be a force to be reckoned with. This girl is definitely leader material. I envision her kids having a Chore Wheel, a set in stone bedtime, and a dreary Time Out room that they're scared to death of. "No mommy, not the Time Out room! It's cold up there and it smells funny. The rats bite our toes and grandmother never lets us out into the sunlight."

So far, I like this one. I tend to lean towards the headstrong women who speak their mind, but what the hell do I know? I also thought GinaMarie had a brain in her head by her casting video last season. So, what do you guys think of Brittany? Will she be too strong and intimidate others? Will she play the single mother card to death? Comment it out bitches and have a great day!

Special thanks to Matt at the Big Brother Network for supplying the cast interviews from whence I steal my screencaps. Thanks Matt!
Posted by Colette Lala at 2:36 PM