Next up is 21 year old Nursing Graduate Nicole Franzel from Ubly, Michigan. From her photo she looks very cute, maybe a little reserved, probably doesn't get into a lot of trouble and then I pressed play, "Okaaaaay so my NAME is Nicollllllle and I just like graduatED Nursing Schooooool." Oy vey. This one is going to be a chore. ANYHOW, Nicole is one of those rare beings we hardly see anymore. She's not a recruit! Two days before the deadline she decided to throw caution to the wind and send a videotape - decorated with fuzzy stickers - in to CBS. "I sent in a VIDeooooo and then I got a CALL baaaaack and soooo it really wentfastfromthere!" Her hands are flying everywhere, my eyes are darting up, down, all around. Gah! I don't know where to look! In the words of the psychotic Ramona Singer, "Take a Xanax! CALM DOWN!"

Occasionally, I have trouble with accents. I can't stomach a Bah-ston accent or one of those dreadful Rhode Ah-land ones either, but the Midwesterners, with their attack on the letter 'a' (it's not short, it's not long, it's mutilated), make me get a little stabby. Nicole, unfortunately, hacks away at her a's like they've done something icky and inappropriate to her. I'm probably going to unfairly judge her based on this fact alone, but I can't help it! 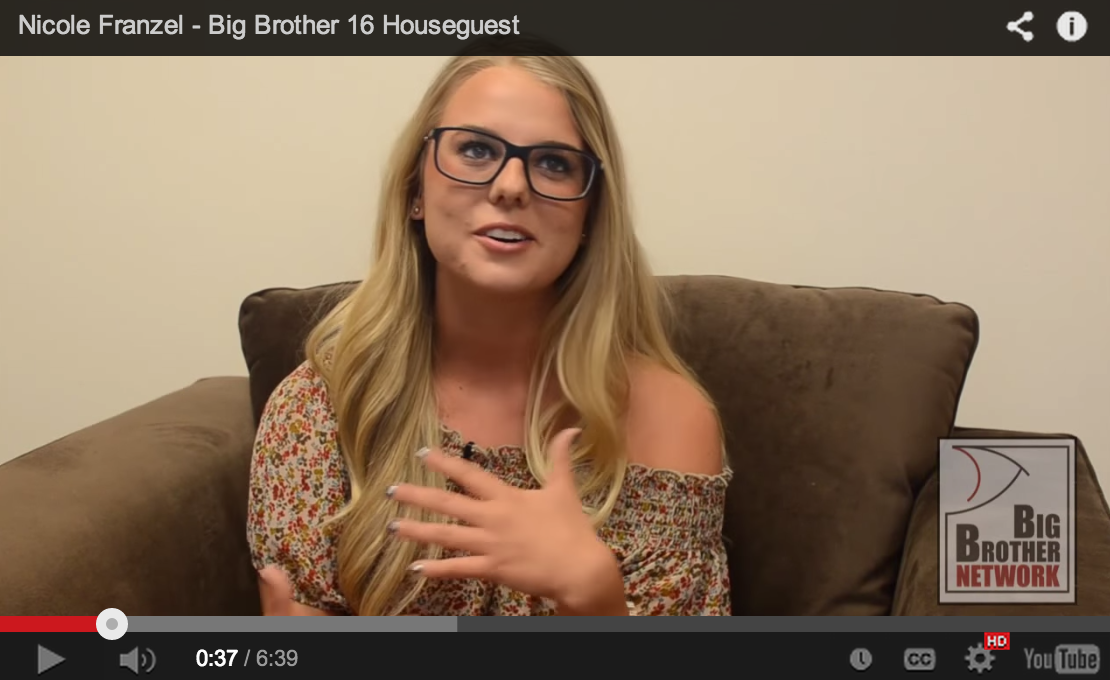 As far as Big Brother is concerned, Nicole is a SUPER fan and she's been watching a SUPER long time. Isn't that super?! She has even gone so far as to make t-shirts for the alliances she likes. Uh oh... this isn't good. Super fans always make the worst HG's. Worse still, she's a Live Feeder. Live Feeders in the house are hyper aware of the cameras and go out of their way to name their alliances. Mark my words, Nicole will be the first HG to name her own alliance. I'm willing to put money on it.

When asked what she is most looking forward to, Nicole replies, "Definitely the cahmpatitions." *stabs self in the brain with a pitchfork* On a positive note, she's especially excited for Endurance comps and thinks she'll be pretty good at them. This tells me that she probably won't throw one. There is nothing worse than an elaborate Endurance Comp ending in 35 minutes. I want 8 hours of torture!

As far as what Nicole will bring to Big Brother, she replies, "My quirkiness? I don't know. Maybe thaaaat. Um, what else? Maybe a little country!" *smacks head against the wall* A "little country" is too much country if you ask me. When it comes to strategy, Nicole wants to be a Chaaallenge Dahminator and has no plans on throwing anything. When choosing her alliance, she'll choose a little bit of everything - like the quirky person to keep things fun, the strong person to win a lot, someone adept with a puffy pen so they decorate hats together, someone who can hang streamers so they don't fall down. You know, people like that.

Alright, here's the skinny on Nicole. She's not a bad person or a ruthless person, but she's a kid. She's an immature bubblegum wrapper. There's no depth there. It's all giggles and balloons. She's acts more like a tween than she does a future nurse. Note to self, never go to Nicole for a blood test. She'll be blowing bubbles and putting a puffy sticker over the injection site.

So what do we think of Nicole? Will she giggle us all to death? Comment it out bitches and have a great day!